Please ensure Javascript is enabled for purposes of website accessibility
Log In Help Join The Motley Fool
Free Article Join Over 1 Million Premium Members And Get More In-Depth Stock Guidance and Research
By Mark Prvulovic - Updated Oct 16, 2019 at 7:15AM

Amid concerns about its $63 billion Allergan buyout, is now a good time to invest in the pharmaceutical giant?

Long-term dividend investors in the pharmaceutical sector have had quite a few high-quality stocks to invest in. One of these, however, seems to have fallen a little out of favor recently. Pharmaceutical giant AbbVie (ABBV 0.49%) has seen its shares fall significantly following news that it intended to acquire Botox developer Allergan (AGN) in a massive $63 billion deal.

Even before this announcement was made, shares of AbbVie had fallen by 40% over the past 16 months since hitting a record high. While it's understandable that AbbVie, now that its Humira patent is expiring, will need to look elsewhere and plan for the future, investors are worried that the company might be overpaying and saddling itself with too much debt too quickly.

Although AbbVie's stock price has taken a tumble, there's a strong case to be made that its recent discount makes it a compelling investment opportunity. Here are a few reasons this might be true. 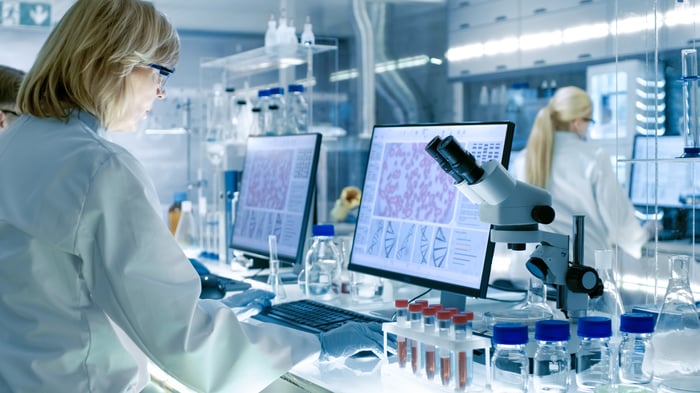 Diving deeper into the Allergan acquisition

Considering the sheer size of the deal, it’s worth taking some time to see exactly how the Allergan acquisition will change AbbVie's drug pipeline. According to an official investor presentation regarding the planned merger, despite eroding revenues from Humira, overall cash flow will still remain above analyst expectations.

Overall revenue growth is also expected to surge following the deal, with estimates coming in between 7% and 10% growth over the next few years. In comparison, the average growth rate for the top pharmaceutical companies by revenue is just 3.3%. While the prospectus doesn't provide more specifics about where this impressive growth rate will come from, Allergan's pipeline has a number of highly promising candidates that likely will end up as successes.

This includes its depression treatment Vraylar as well as a new pipeline of drug candidates intended to treat gastroparesis and nonalcoholic steatohepatitis (NASH). Besides these pipeline candidates, Allergan's Botox and implant products are also expected to remain solid revenue drivers for AbbVie once the merger comes together.

All this is a big deal for AbbVie, since its historical cash cow, Humira, is expected to see its sales erode over the next few years. Currently, Humira accounts for 60% of AbbVie's sales, but following the merger, Humira would account for only 40% of the company's revenues.

While the consensus on Wall Street seems to be that Allergan brings plenty to the table in terms of stable revenue and drug candidates, the fact that AbbVie will end up paying more than $60 billion for the deal is what's worrying some investors. AbbVie currently has approximately $31.6 billion in long-term debt.

For this reason, it's reassuring to hear that AbbVie's management tackled this specific topic in its postacquisition conference call. The company's chief executive promised that cutting back on the debt would be one of its first priorities after the Allergan merger goes through.

"We have committed to reducing debt by $15 billion to $18 billion by the end of '21 with further deleveraging through 2023," said CEO Rick Gonzalez. AbbVie's chief executive also made sure to promise investors that the company would continue to grow its already strong dividend. "The transaction also provides cash flow to support a strong and growing dividend...we're absolutely committed to a growing dividend, and nothing has changed."

However, investors also have to take into consideration that the previously mentioned figures are still just internal projections. While the company's management is just as qualified as any other third-party analyst to make these estimates, they do have a vested interest in making sure the merger goes ahead as planned. Even if investors take these estimates with a pinch of salt, however, there's little reason to doubt that AbbVie's combined drug pipeline would lead to significant growth.

Other drivers of revenue growth include immunology drugs such as Rinvoq and Skyrizi, both of which could rival Humira in terms of effectiveness. Rinvoq, in particular, has seen highly promising clinical study results that showed it outperformed Humira in treating rheumatoid arthritis in all of the study's measures of efficiency. Both drugs received approval earlier this year, and AbbVie's management expects them to generate around $6.5 billion and $5 billion, respectively, in peak annual revenue.

Assuming that AbbVie is able to quickly reduce its debt load, its dividend seems much more appealing. The company has maintained a strong dividend over the past few years, with its current yield of 5.8% trouncing the S&P 500's dividend yield of 1.9%.

In comparison to the same time last year, AbbVie's dividend has grown by 19.2%, with the company increasing its dividend five times over the past five years. The company shows no signs that it's planning to stop this pattern, which means that dividend investors have a lot to look forward to from AbbVie in the future, especially if any of its new drugs become as successful as anticipated.

While investors might have balked at just how much debt AbbVie is taking on to make this Allergan deal a reality, there isn't too much to be worried about. Even previously bearish analysts, such as CitiGroup's Andrew Baum, have changed their ratings for AbbVie from a sell to a buy after considering AbbVie's postmerger financial projections for the upcoming years.

AbbVie's share price seems to be greatly discounted at present, with its promising new drugs getting overshadowed amid these debt concerns. This is a shame since the future looks bright for the pharmaceutical giant in terms of both revenue growth and an increasing dividend.