Major benchmarks were mixed on Wednesday as investors paused following sizable gains from Tuesday's session. Market participants kept a close eye on Hong Kong, where pro-democracy protestors have fought against Chinese government policies. As of 11 a.m. EDT, the Dow Jones Industrial Average (DJINDICES:^DJI) was down 10 points to 27,015. The S&P 500 (SNPINDEX:^GSPC) rose 1 point to 2,996, and the Nasdaq Composite (NASDAQINDEX:^IXIC) dropped 9 points to 8,140.

There have been plenty of strategic moves lately from companies seeking to take maximum advantage of the assets they own, and MGM Resorts International (NYSE:MGM) made a major step toward selling off stakes in two iconic properties in Las Vegas. Meanwhile, earnings season continued, and United Airlines Holdings (NASDAQ:UAL) was able to give investors a more upbeat view of the airline's future.

MGM Resorts International saw its shares fall 1% after the company announced a couple of major transactions involving two well-known casino resort properties. Although the Circus Circus property and the luxurious Bellagio resort don't have a lot in common, MGM's strategy used both to raise cash. 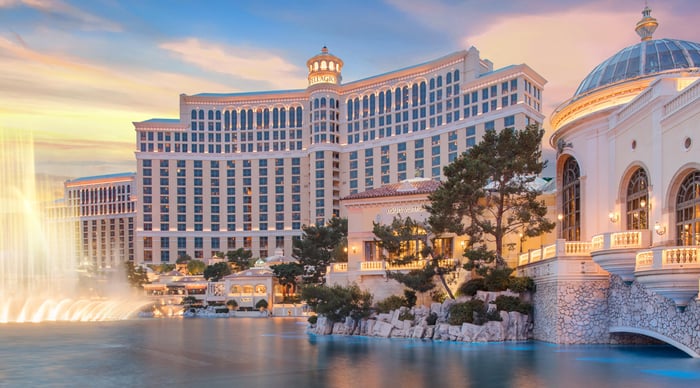 At the bargain end of the Vegas spectrum, MGM agreed to sell Circus Circus for $825 million. The purchaser is an affiliate of Phil Ruffin, who owns the Treasure Island resort on the Vegas Strip. MGM had acquired Circus Circus in 2005, but CEO Jim Murren said that the sale would help MGM move forward in "executing its asset-light strategy" and add to the casino giant's flexibility in allocating capital.

Meanwhile, the much bigger transaction involves a sale and leaseback of the Bellagio resort. MGM will sell the Bellagio's real estate to a joint venture with Blackstone Real Estate Income Trust, valuing the property at $4.25 billion. MGM will then lease back the real estate in order to operating the Bellagio, paying annual rent starting at $245 million. MGM will take a 5% interest in the venture along with $4.2 billion in cash.

On the whole, investors will generally be happy to see MGM take steps to reduce its leverage and give itself more room to maneuver strategically. With activist investors having urged a move like this for some time, MGM's decision shows its recognition of the advantages of focusing on its best prospects.

Shares of United Airlines Holdings picked up 3% following the release of its third-quarter financial report. The company performed better than most had expected, and it also boosted its views on how the rest of the year will go.

United saw healthy gains in key metrics. Total operating revenue was up 3.4% from year-ago levels, and net income jumped 23% year over year. Combined with a significant drop in share count, United's earnings per share soared more than 30% from the same period last year. Revenue per available seat mile was higher by 1.5%, and load factors overall climbed a tenth of a percentage point to 86.1%.

The airline also pointed to clearer skies ahead. United boosted its 2019 guidance for adjusted earnings per share, and the company also said that it now expects to meet or exceed its initial targets for earnings for 2020. CEO Oscar Munoz noted that the airline has succeeded despite facing "headwinds [that] affected the sector as a whole."

United and its peers have had to deal with occasional turbulence, but the airline's performance shows that the fundamental strength of the U.S. economy is still supporting the company. Investors appear to be increasingly comfortable that even fears of a possible recession won't necessarily spell the end of United's ascent.