It's interesting (and maybe profitable) to find the disconnect between what industry veterans think they know and what Wall Street says. Take Farfetch (NYSE:FTCH), for instance. When it announced that it was acquiring New Guards Group, Wall Street was very unhappy. The stock dropped 45%.

I'm seeing a different reaction in fashion media. GQ thinks the acquisition is amazing. So let's dig in and see why those in the fashion world loves the deal and Wall Street hates it. 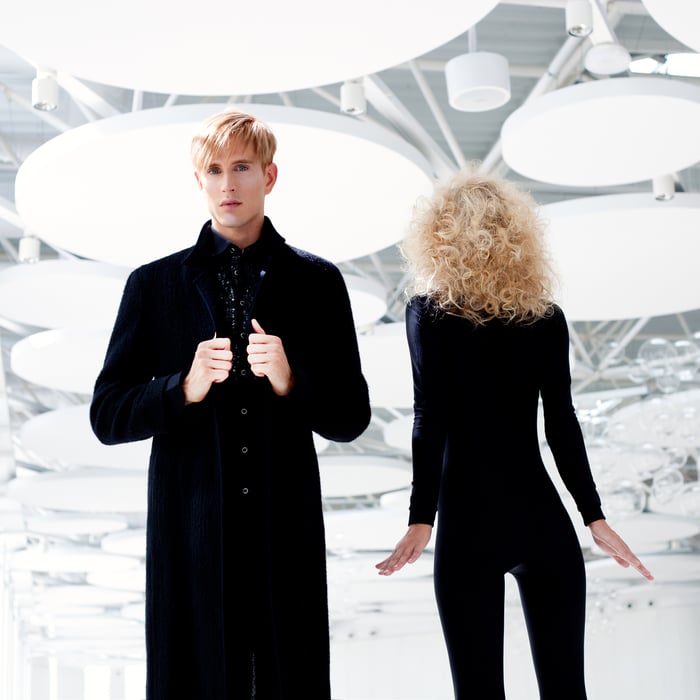 Off-White is a top brand

I'm not a fashion guy (ask any of the women who have dated me). I mean, I will put Crocs on my feet. But even I know a fair share of brand names and consumer stocks. However I had not heard of any of the brands involved in this deal. Heron Preston? Off-White? Palm Angels? I had no idea who they are.

GQ assumes its readers are familiar with the parent company that was acquired, New Guards Group. The group has an exclusive contract with -- but does not own -- the trendy label Off-White. So GQ was wrong in making the assumption that Farfetch now owns the coveted brand. It does not; Off-White remains an independent brand (although committed to Farfetch via contract).

While this might seem like misreporting, it's important to understand that, unlike financial media, many writers and editors in the fashion world likely don't care so much about who owns what. They care more about brand popularity and fashion sensibility.  So when fashion media tell us that Off-White is a very popular brand, I believe them. But we might not want to trust them on their financial analysis.

Does Wall Street know what New Guards Group is?

On the conference call, an analyst asked Farfetch's chief financial officer, Elliot Jordan, how the acquisition of New Guards Group is going to affect Farfetch financially. And he responded with some numbers:

In terms of New Guards Group, it absolutely contributes to the overall 30% EBITDA margins, so the last 12 months to April, profit before tax was $95 million versus revenue of $345 million. There's opportunities, I believe, to continue to drive EBITDA margin in that business as we leverage the synergies of joining Farfetch. So, very strong in terms of the margin targets. And in terms of route profitability, obviously a profitable business will help that path to profitability.

New Guards Group has profit margins of almost 30%. So that's important to know. Farfetch has acquired a highly profitable business, one that has exclusive contracts with one very popular brand and several rising stars. Later on in the call we learn that New Guards is growing revenues by 50%. So this is an outstanding business that Farfetch has acquired.

The founder and CEO, Jose Neves, added this:

We're talking in the terms of New Guards, the company with give or take $500 million in annualized sales and almost 30% profitability, know that some of the cash [is] in the bank. They were not looking for a financial transaction. They were looking for a strategic partner that could really elevate their business.

That's an interesting tidbit. New Guards wanted a "strategic partner." That suggests that maybe New Guards came to Farfetch looking to partner on some deals, and was surprised with an offer to be acquired. The way I see this acquisition, then, is that a very profitable and fast-growing company wants to join up with Farfetch, which is not profitable. It makes you wonder what Farfetch has that New Guards wants.

Recall that New Guards does not own Off-White, the very popular brand. Instead it is providing distribution for the brand. I've seen this in other industries, like with Disney. Production is important, but it is distribution where all the money is made. The producers are the risk takers and the distributors are the money makers. That's why New Guards has 30% profit margins and is growing revenues by 50%. And its inventory is low.

Farfetch acquired New Guards and simultaneously tweaked its own business model. Financially, the deal makes a lot of sense. New Guards is highly profitable and fast-growing. Farfetch tracks the performance of all its brands, so it knows that Off-White is hot. On the conference call, Jordan said, "I'm sure you've heard the fashion houses -- Prada has said this publicly, Kirin has said this publicly -- they will be looking to pull back on the distribution in some of the traditional retailers and the e-tail model and focusing more on e-concessions, which Farfetch is the only e-concession."

I'm not at all sure that Wall Street analysts are following what Prada or Kirin (another brand New Guards has introduced to the world) announces in public. But that comment is very helpful. High fashion brands are moving away from traditional retailers and e-tailers and are focusing more on e-concessions. They like Farfetch because it can and will protect their exclusivity. And now Kirin is being talked about in the same breath as Prada.

I think fashion media is right, Farfetch has made a wonderful acquisition. And the negative reaction on Wall Street is perhaps based on a failure to clearly understand who Farfetch acquired and how that adds value.