Please ensure Javascript is enabled for purposes of website accessibility
Log In Help Join The Motley Fool
Free Article Join Over 1 Million Premium Members And Get More In-Depth Stock Guidance and Research
By John Ballard - Oct 17, 2019 at 9:45AM

The Chinese video streamer has shown faster growth, but the global music streaming service has been more consistent.

It hasn't been a good year for subscription streaming services. The stock prices of iQiyi (IQ -6.38%) and Spotify Technology (SPOT -3.46%) are down 37% and 27%, respectively, over the past 12 months. Both companies have demonstrated momentum in attracting new users to their services, but their share prices still slid, mainly because investor expectations were previously too high.

We'll compare both companies on revenue growth, profitability, and other qualitative factors to find out which one is the better buy for investors today. 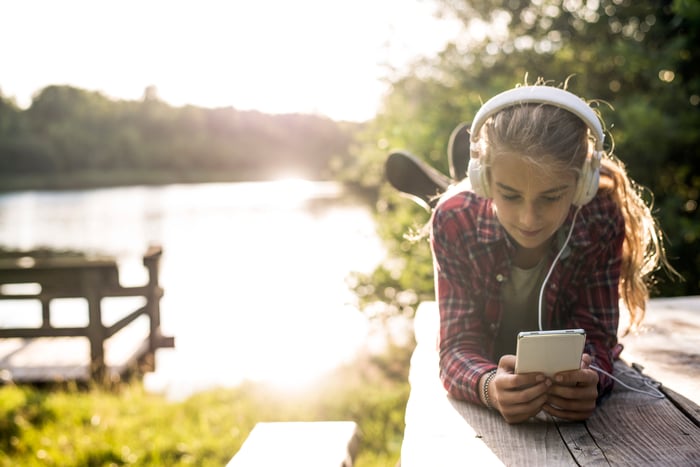 iQiyi's revenue growth has decelerated dramatically this year, falling from 55% at the end of 2018 down to 15% in the last quarter. Investors can blame the slowdown in China's economy for the falloff. The video streamer has made a lot of progress in growing its subscription-based streaming service, but iQiyi is still heavily dependent on online advertising services to lure new users to its platform with ad-supported video streaming. In the second quarter, companies in China continued to pull back on ad spending, which caused a 16% drop in revenue in iQiyi's online advertising segment (32% of revenue).

On the other side, Spotify's revenue growth has been much more consistent, which reflects the high percentage of its revenue that comes from subscriptions, the company's global reach, and a large user base that remains satisfied with the service -- a fact reflected by its record-low churn rate last quarter. Quarterly revenue growth has hovered around 30% during the last year. Spotify has seen good results after it added its service to the offerings available through Sony's PlayStation game console, as well as launching in India earlier this year.

On the profitability front, Spotify has a clear advantage with $43 million in operating profit over the last year, compared to iQiyi's widening loss of $1.4 billion. 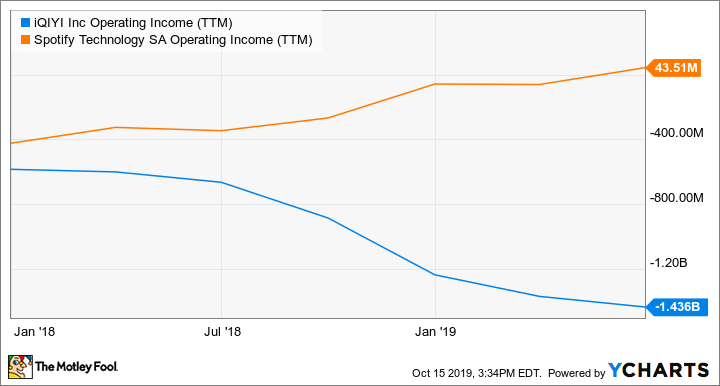 iQiyi's revenue growth should reaccelerate once the macroeconomic environment in China gets back to normal. The video streamer has a bright future, giving consumers' growing awareness of its brand, a lengthening pay period for subscribers, and China's growing middle class. But choosing between the two today based on these metrics, I would lean toward Spotify, given its consistency on the top line and its improving profitability.

Obviously, iQiyi is almost completely dependent on the Chinese market, and right now, it's getting cut by the disadvantageous side of that double-edged sword. iQiyi has a growing distribution business through which it sells some content to other channels and overseas markets, but attracting subscribers in China is its main source of growth. The company is starting to target lower-population cities, but some investors might see that as a sign that iQiyi has already captured the bulk of the low-hanging fruit in the nation's larger ones.

Spotify benefits from its far-reaching global subscription business, with its 232 million active users spread around the world. The company is delivering improving profitability while still investing in technology, product features, and new opportunities like podcasting. By contrast, iQiyi's losses are widening as it invests aggressively in original content.

The recent performance of both companies suggests that Spotify may have the better business model. Unlike iQiyi, it doesn't have to spend large sums on content to drive growth. It simply pays the music labels fees to stream songs. And given the steady improvements in operating income, it's clear that the music streaming service has some leverage in its cost structure.

All in all, I believe Spotify is the better buy.