Efficient operations and happy customers have the current membership renewal rate at 90%, and the good word-of-mouth that comes from satisfied members increases their ranks. In terms of income, membership fees brought in $3.4 million in fiscal 2019, compared with $3.1 million in 2018. 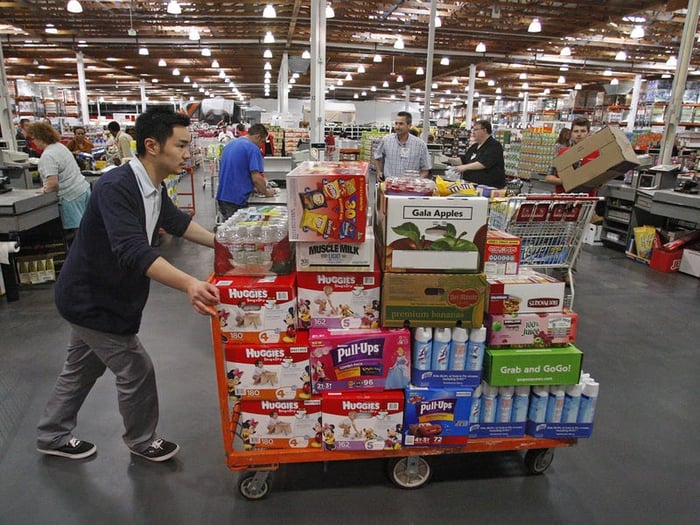 Why is Costco so popular?

Obsession with Costco is a real thing. Membership stands at about 98.5 million worldwide. There are popular websites devoted to the brand, such as CostcoInsider.com, and Instagram accounts, such as @costcodeals. After having their first date at a Costco, a San Diego couple even decided to get married there.

None of this devotion happened by accident.

The fact that members need a card to shop there conveys a feeling of exclusivity. And once a customer has shelled out hard-earned cash for a membership, he or she wants to maximize return on investment, leading to increased store visits.

Costco strives to make those visits fun, offering unlimited food and drink samples and surprise deals that encourage the hunt. Bargain shoppers can snap up designer items such as Spyder ski sweaters and Rebecca Minkoff handbags along with their bulk laundry detergent.

At the core of Costco's strategy is the idea that everyone loves a deal on high-quality products. To Bob Nelson, the company's senior vice president of financial planning and investor relations, a good deal "feels like winning." He added, "Would you rather win or lose?" But a low price isn't the only component of a good deal. Exceptional value is a critical component of Costco's strategy, too: "The definition of value for us," Nelson said, "is highest quality, lowest price and best member service."

Keeping costs down is key to all this, which is why Costco keeps up exceptional relationships with its suppliers, receiving very competitive prices on goods. Management runs a tight ship operationally, with shoppers picking items up off the same pallets they arrived on.

And while people costs can weigh on any operation, Costco is doing well in that regard. The March 4, 2019 increase in starting wages to $15 per hour is paying off exponentially in low turnover, eliminating the high costs of finding and training new employees.

What's next for the stock

Costco continues to deliver for investors and customers alike as the company steadily expands its customer base and fulfills its value proposition. In late August, the company opened the first Costco in China, signing up an astounding 200,000 members -- triple the average U.S. store membership -- within weeks. A second store will open in Shanghai in 2021. The potential in China is huge, and Costco is approaching it in a deliberate way to maximize profits.

The stock looks expensive at current prices near all-time highs. Shares are trading at 35 times forward earnings estimates, above the five-year average P/E of 30, compared with the broader market's valuation of 17 times forward earnings. But Costco continues to prove itself as best-of-breed, and stocks of this magnitude delivering consistent growth sell at a premium for a reason.

Investors should anticipate long-term success from Costco as it continues to expand, thanks to its devoted customer base, proven strategies, and successful international presence. Everything at Costco is big, and the stock price will remain outsized compared to those of its retail peers, too.