Take-Two Interactive (NASDAQ:TTWO) has a special thing going with Grand Theft Auto V (GTA V). The game was released in the fall of 2013 and has sold a whopping 110 million copies across console and PC platforms, and it continues to keep players engaged every quarter.

A video game is considered a big success if it reaches even a fraction of Grand Theft Auto's audience. The only problem for Take-Two -- and it's a good problem to have -- is that the next Grand Theft Auto will have to eclipse the massive sales of GTA V to show some growth, especially since Take-Two stock is valued for its growth potential in the $152 billion video game industry. 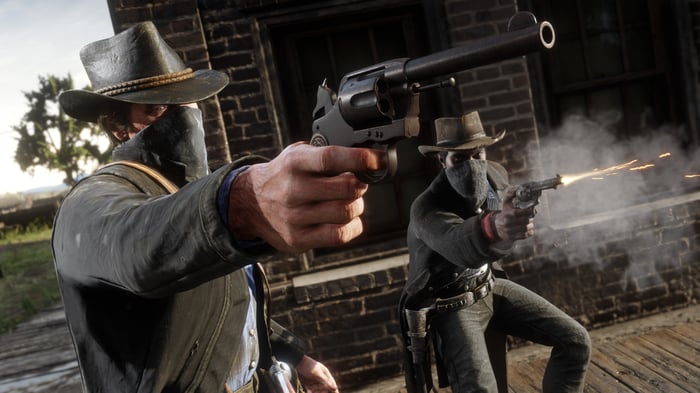 However, Take-Two may already have the answer to that problem with Red Dead Redemption 2. The western action game was released last fall, and recent sales point to another massive franchise in the making.

The rock star of video games

Investors have high hopes for the Red Dead Redemption franchise. It's designed by Rockstar Games, the same studio behind Grand Theft Auto. Both games basically play the same way. The main difference is that GTA V is set in a fictional city styled after Los Angeles, whereas Red Dead Redemption is set in the Wild West of 1899. It's Rockstar, the gold standard of game design, so players love both.

The main reason GTA V has sold so well is that the game gives players a virtual sandbox to play in. There's a single-player story campaign as well as an online multiplayer option (Grand Theft Auto Online) where players can complete missions with others to earn in-game rewards. Rockstar is known for delivering very polished games that play well, and the studio also does a good job of steadily releasing engaging content to keep players coming back.

Investors have similar hopes for Red Dead Online. It just came out of beta earlier in the summer, so there's not as much content available for it compared with the multi-year development that has gone into GTA Online. Nonetheless, management is very excited about the potential of Red Dead Online. CEO Strauss Zelnick told investors on a conference call in August that "the title has been performing better and better and gaining momentum."

Zelnick should be excited, because sales of Red Dead Redemption 2 are tracking close to first-year sales of GTA V. In February 2015, Take-Two announced that GTA V had sold 45 million copies. That's about 15 months after release. Red Dead 2 was released on Oct. 26, 2018, so we don't have 15 months of sales data available yet. However, Take-Two reported in early August that Red Dead 2 had sold 25 million copies. That number will be much higher by the time the company announces holiday sales results.

An added kicker for Red Dead 2 in the short term will be the PC release coming in November. The PC version will feature enhanced graphics and other technical improvements to the game. Additionally, Rockstar is using the occasion to launch more new content, including new weapons and story missions.

GTA V became available on PC in April 2015, more than a year after its initial release. While the company doesn't disclose platform-specific sales numbers, there's no doubt that the PC version was crucial for the game's momentum.

GTA V has been one of the most-watched games on Twitch, and many top streamers play the game on PC. This is due to the versatility of the PC as a game machine. Players can download and install modifications to the game that enhance the playing experience in an infinite number of ways, which adds to the game's appeal as a virtual sandbox.

A growing audience for future releases

With sales soaring since Red Dead 2's release last fall, Zelnick expressed his enthusiasm for the future of both Red Dead and GTA during the company's fiscal first-quarter conference call:

We're really thrilled with the sales of Red Dead Redemption 2 at over 25 million units, and we're excited about the continuing momentum with Red Dead Online. We've also said that we expect that Rockstar Online, which is both Red Dead Online and Grand Theft Auto Online, should be setting a new record this year.

Zelnick's reference to Rockstar Online suggests that the company is looking at both games as one large community of players -- a platform -- that Take-Two can monetize over time.

Speaking to the potential of Red Dead Online as a moneymaker, here's what President Karl Slatoff had to say:

With the game like Red Dead, where you can engage significantly with the characters in the games, we think there are wonderful opportunities for players to experience the Red Dead Online world on an ongoing basis, especially as new content has dropped ... We do feel there are and will be plenty of opportunities to create recurrent consumer spending, based on the format of the Red Dead Online world.

Take-Two expects the combined bookings of Red Dead Redemption and Grand Theft Auto to increase in fiscal 2020 (which ends in March). Revenue from the Rockstar label is expected to make up 30% of Take-Two's business.

It's understandable why the stock has enjoyed significant gains in 2019: Take-Two has two monster franchises with a massive built-in base of players to sell new releases to, and the next installment of Grand Theft Auto is not too far away.