A decline in an annual brand ranking and Zuckerberg's bizarre free-speech address show that the company still has work to do to mend its image.

Facebook ( FB 1.39% ) the stock has had a stellar 2019. Shares are up 41% year to date as the company seems to have put to rest concerns about slowing profit growth and a backlash following the Cambridge Analytica scandal.

But despite user growth and improving financial results -- excluding the $5 billion Federal Trade Commission (FTC) fine it paid -- Facebook's brand value has continued to erode, according to Interbrand, the consulting firm that publishes a closely watched ranking of global brands. In Interbrand's survey, Facebook's brand value fell for the second year in a row, slipping 12% to $39.9 billion, and dropping from No. 9 to No. 14 in the ranking.

For a company still growing as fast as the giant social network is, it's strange to see it losing brand value, especially as the other top tech giants -- Apple, Google, Amazon, and Microsoft -- make up the top four on the list, and all saw growth.

Among the reasons for Facebook's slide were a lack of trust and negative media attention surrounding the company's influence, according to a report in The Wall Street Journal. 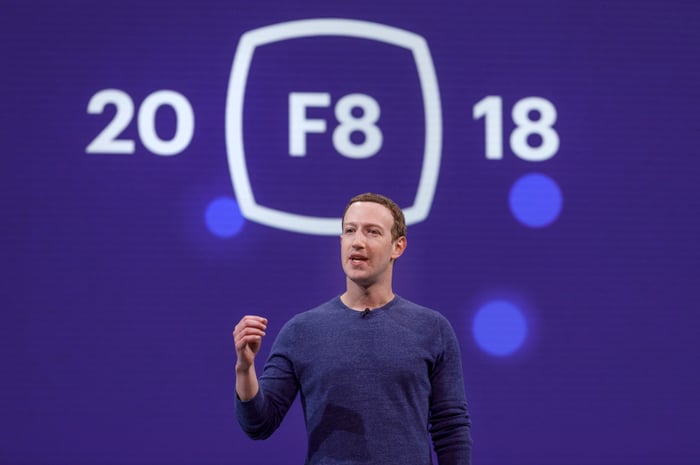 Stuck in the spotlight

The Cambridge Analytica scandal broke nearly two years ago, but Facebook and CEO Mark Zuckerberg still find themselves regularly defending the company's business practices, a pattern that's unlikely to change ahead of the 2020 election.

In a speech on Thursday at Georgetown University, Zuckerberg defended free speech on its platforms, but by doing so, stood by his controversial stance that Facebook is not responsible for policing political speech on its sites even when it may be inaccurate. In other words, Facebook does not believe it needs to do more to limit the spread of disinformation.

The speech prompted jeers from a chorus of critics, including presidential candidates Elizabeth Warren and Joe Biden; Salesforce CEO Marc Benioff, who said Facebook "needs to be held accountable for propaganda on its platform" and called for its breakup; and a range of pundits across the media.

Sen. Ron Wyden, the Oregon Democrat, also introduced a data privacy bill and specifically targeted Zuckerberg, saying, "I don't think anything will change unless there are personal consequences when someone like Mark Zuckerberg lies and lies repeatedly to the public with respect to their privacy policies," according to Yahoo! Finance.

Zuckerberg's speech comes before another high-profile appearance in front of the House Committee on Financial Services next week to testify about plans for its Libra cryptocurrency.

With a user base of over 2 billion people around the world, millions of advertisers, and huge profits, Facebook is one of the most influential and dominant companies.

The brand crisis has not been enough to derail the company's growth. Monthly active users increased 8% to 2.41 billion in its latest quarter, and revenue was up 28%. Excluding the FTC fine, operating income rose 13%.

But the ongoing backlash against Facebook poses a very real threat to the social network, especially as regulators get more involved. The company would be wise to take threats of a breakup or stricter oversight seriously. Though Facebook's core business is unlikely to be harmed, the company's ambitions in new projects like Facebook Dating and Libra depend on public trust and credibility with regulators, and its image problems are part of the reason Libra has lost so many backers recently, including Visa, Mastercard, and eBay.

Facebook is many things. It's a social network, a way to form and connect with private groups, a marketplace, an advertising platform, and a news outlet. Zuckerberg would do himself a favor to recognize the outsize influence of disinformation on the platform, and realize that his company loses credibility and value by allowing the site to become an online equivalent of a supermarket tabloid, rife with rumor and falsehoods.

Attention to this issue in the media, presidential campaigns, and halls of Congress is only likely to increase ahead of the election. Investors may hear more when Facebook reports third-quarter earnings on Oct. 30. While the company is expected to report another round of strong growth, management needs to address the ongoing backlash against the brand and figure out a way to end it.