Please ensure Javascript is enabled for purposes of website accessibility
Log In Help Join The Motley Fool
Free Article Join Over 1 Million Premium Members And Get More In-Depth Stock Guidance and Research
By Evan Niu, CFA - Oct 19, 2019 at 9:00AM

Azure and Office 365 are a powerful combination.

Microsoft (MSFT -0.40%) may still lag Amazon.com in the cloud computing market in terms of overall revenue, but the Azure segment continues to boom thanks to the tech company's superior ability to cater to enterprise customers with other cloud-based services like Office 365. RBC Capital analyst Alex Zukin yesterday assumed coverage of Microsoft with an outperform rating and boosted the firm's price target from $153 to $160. 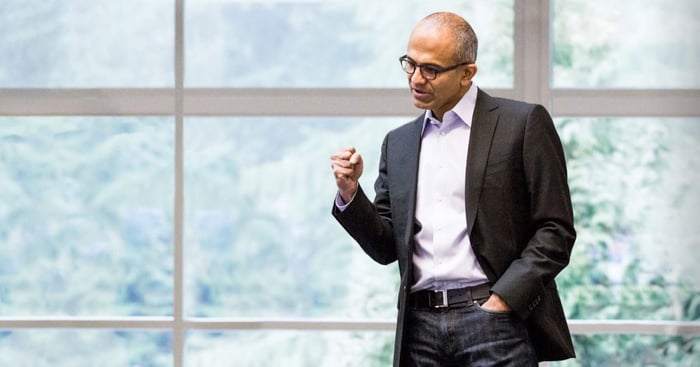 The "King of Cloud"

Zukin dubbed Microsoft the "King of Cloud" in a research note to investors after taking over coverage from another analyst. As enterprises continue to transition their technology infrastructure to the cloud, Microsoft is poised to earn much of that business throughout the secular shift.

"In a world increasingly moving to the cloud, but still encumbered by legacy investments that sit elsewhere and still drive value today, Microsoft is uniquely positioned to take an increasingly large percentage of corporate IT budgets in a hybrid world," Zukin wrote. Azure and Office 365 are a potent combination, offering "mission-critical functions" to organizations, in the analyst's view.

For example, AT&T and Microsoft had announced a major multiyear partnership to help the telecommunications and media conglomerate accelerate its transition to the cloud, migrating its non-network workloads to Azure while using Office 365 for productivity and collaboration. That deal is worth $2 billion, according to TechCrunch, and CEO Satya Nadella called it "one of our largest cloud commitments to date."

"With the unmatched depth and breadth of its technology portfolio, we believe the company has multiple levers to grow revenue, margins, and its customer base over the next several years, evidenced by multiyear double digit revenue growth at unmatched scale," Zukin added.

CFO Amy Hood in July attributed recent margin expansion to improvements in Azure gross margin. Hood also noted that commercial bookings growth was "significantly ahead of expectations" due to "strong renewal execution and an increase in the number of larger, long-term Azure contracts." The company now has an astounding $91 billion in contracted revenue that has not yet been recognized.

Looking ahead, RBC expects Azure revenue to grow 55% in fiscal 2020, and Zukin believes Microsoft will beat revenue and profit expectations in the fiscal first quarter and the full fiscal year. The software giant is scheduled to report fiscal first-quarter earnings on Oct. 23.