Please ensure Javascript is enabled for purposes of website accessibility
Log In Help Join The Motley Fool
Free Article Join Over 1 Million Premium Members And Get More In-Depth Stock Guidance and Research
By Darrell Delamaide – Oct 19, 2019 at 7:00AM

Nuclear power remains a vexed issue even as pressure grows to reduce reliance on fossil fuels and cut greenhouse gas emissions. Electrical utilities stopped building coal-fired power plants more than a decade ago and are closing old ones down as quickly as possible, switching instead to natural gas, which is relatively cleaner. 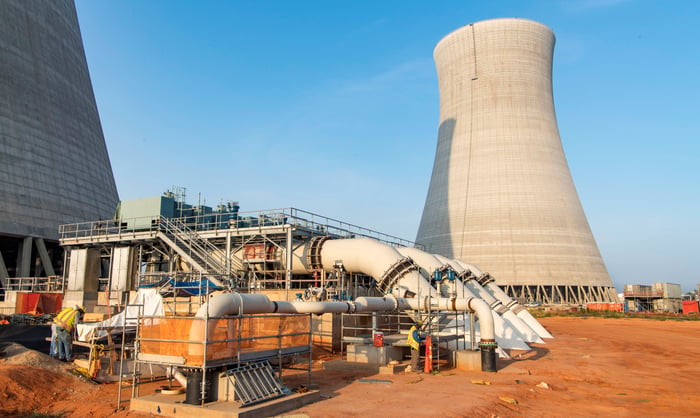 The ghosts of Three Mile Island, Chernobyl, and Fukushima haunted the public and scared utilities away from building new 1,250-megawatt nuclear reactors. In addition, cost overruns and bureaucratic delays meant that few were willing to take the bet on large-scale nuclear plants.

Except for one. Southern Company (SO -2.08%) defied conventional wisdom and in 2006 began the permitting process for its Georgia power unit to build two new nuclear reactors near its existing two-unit Vogtle power plant in Georgia -- the first new reactors to be built in the U.S. in 30 years and the only ones under construction. The two reactors, originally scheduled to come on-stream in 2016 and 2017 at a cost of $14 billion, are now set to go into operation in 2021 and 2022 at a cost of more than $27 billion.

It has been an arduous process that no one, including Southern Company, is likely to repeat anytime soon. Southern's CEO Tom Fanning has said it will be the 2030s or 2040s before the company considers building another one.

In the meantime, however, and for at least the 40 years of licensed operating life, Southern Company will benefit from one of the cheapest sources of energy going. The cost of nuclear fuel is $0.008 per kilowatt-hour, compared to $0.0289 for gas and $0.028 for coal.

Nuclear currently represents 16% of Southern's generated power, compared to 47% for gas, 23% for coal, and 14% for renewables and other. Vogtle 1 & 2 as well as the company's other nuclear plants, Farley and Hatch, have had their operating lives extended by decades and the new reactors can expect the same.

The new plants use AP1000 advanced pressurized water reactor technology, which provides for nuclear cores to be cooled even without operator intervention or mechanical assistance. It is considered significantly safer than previous technologies.

Although the company won't be building another large reactor anytime soon, it is also looking into small modular reactors that many in the industry believe is the future of nuclear power. These advanced reactors don't require the huge (and expensive) containment facilities in current large-scale reactors, plus they can use the used fuel from the current fleet. Other advances the company is exploring are accident tolerant fuels-fuels that cannot melt down.

All of the above

For all the noise about nuclear power, the United States remains the world's largest producer, with nearly a hundred plants producing more than 100,000 megawatts of electricity, accounting for 20% of the nation's electricity generation and 55% of its low-carbon production.

The question is whether nuclear power has a future in combating climate change. When Massachusetts closed down its Pilgrim power plant last spring after nearly 50 years of operation, nuclear critics cheered. But Pilgrim produced most of the state's carbon-free electricity-more than wind, solar and hydro together.

The Union of Concerned Scientists last year urged a change in policy to promote nuclear energy as about a third of the country's reactors-representing more than a fifth of power generated by nuclear plants-face early closure. Natural gas and coal will replace them, raising power-sector emissions in spite of conservation efforts.

For Jacopo Buongiorno, head of MIT's Center for Advanced Nuclear Energy Systems, there is no effective way to combat climate change without nuclear energy.

Southern Company's commitment to nuclear power is beginning to look prescient. It's the company's ace in the hole for future profitability. The Georgia power unit will have its new nuclear plant but is also investing in renewable energy to raise the contribution of those carbon-free sources to 22% by 2024.

Atlanta-based Southern is one of the safest bets in the utility sector even without its nuclear power advantage. One of the largest generators of electricity in the country, it operates in six states, pays a good dividend, and is a classic defensive stock in case of a recession. Right now analysts mostly have a hold rating on the stock, but they may be underestimating the impact of its sleeper nuke.