2019 is a pivotal year for Netflix (NASDAQ:NFLX). It's firmly established as the global leader in streaming TV technology, but a crowd of competitors has pulled TV and movie content off of Netflix's platform in order to go live with their own services. With highly-anticipated offerings from Disney and Apple just weeks away from launch, Netflix cleared a hurdle in the third quarter of 2019 -- albeit not perfectly.

Subscriber growth has slowed significantly, especially in the U.S., and management is still dumping billions into new content. Besides the company losing steam as new streaming options come online, high spending and negative free cash flow could become worrisome in the years ahead. 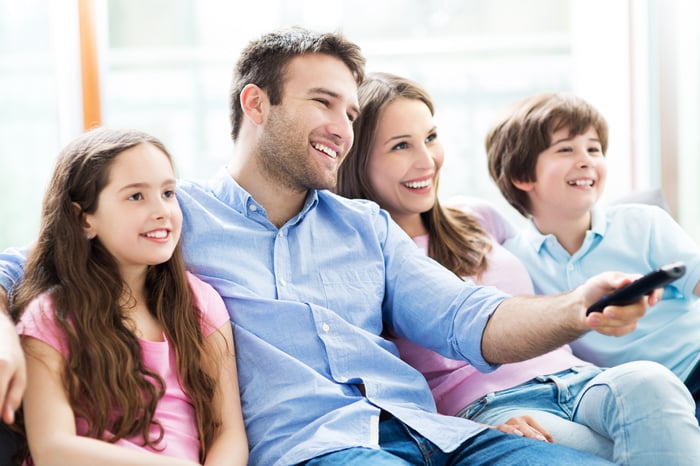 A good time to be in show business

Netflix is still on track to spend $15 billion on content this year. As the years have gone by and external threats have mounted, the company has progressively shifted to spending the bulk of that budget on original content rather than acquiring old shows and movies from studios and distributors.

Other platforms like Disney+ and Apple TV+ have been spending heavily to load up their streaming platforms with new content, too. And like any finite resource, content is subject to the normal rules of supply and demand. If demand goes up and supply is limited, prices go up. In an interview with Guggenheim Securities regarding the 2019 third quarter, Netflix Chief Content Officer Ted Sarandos threw out a ballpark figure that producing a show today is about 30% more expensive than a year ago. That's a massive year-over-year increase, one that implies a $15 billion-a-year Hollywood budget doesn't go nearly as far as it did in the recent past.

Will costs moderate? Only time will tell, but with studios all ramping up spending at the same time, my bet is that movie and show producers will continue raising the bill until the boom in demand eases. Netflix, for its part, indicated it will be spending a similar amount in 2020 to keep expanding its library of entertainment, which will be key, especially overseas, as that now represents the primary growth driver going forward.

Nevertheless, with higher prices and Netflix's content budget remaining roughly equal, management will need to be more judicious when choosing which shows and movie projects to fund. Netflix critics have always been quick to point out that the company has utilized the shotgun approach, churning out volume rather than quality. So fewer projects due to higher content creation expenses may not be a bad thing. Taste in entertainment is subjective, though -- what one person likes another may not. Nevertheless, love it or hate it, the volume of new streaming TV on the platform is set for a slowdown.

Though Netflix's top brass has said it will keep spending in 2020, less of a spend-happy mentality might not be a terrible idea -- and not just because of the surging cost to crank out new programming. Free cash flow (money left over after basic operating expenses and capital expenditures) is still running deep in the red. Third quarter free cash flow was negative $551 million, bringing the 2019 nine-month total to negative $1.60 billion. Another steep loss is looming in the fourth quarter as management reiterated its outlook for full-year negative free cash flow of about $3.5 billion.

CFO Spencer Neumann said free cash flow will be better next year as Netflix continues to add new subscribers, but it's still likely there will be plenty of red even with an improvement. It will take at least a few 10 million net new subscribers to dig out of that hole. Perhaps 25 million net new subscribers is the magic break-even number (assuming a $12-a-month subscription multiplied by 12 months, equating to $3.6 billion in new revenue but not factoring for any new expenses)? Put simply, Netflix and its current content spend outlay is still a ways off from real profitability, right at the time a bunch of new competition is arriving.

In the meantime, the company said it will continue to tap the bond market (debt) to prevent cash burn. New debt on the books has ramped up aggressively the last few years. 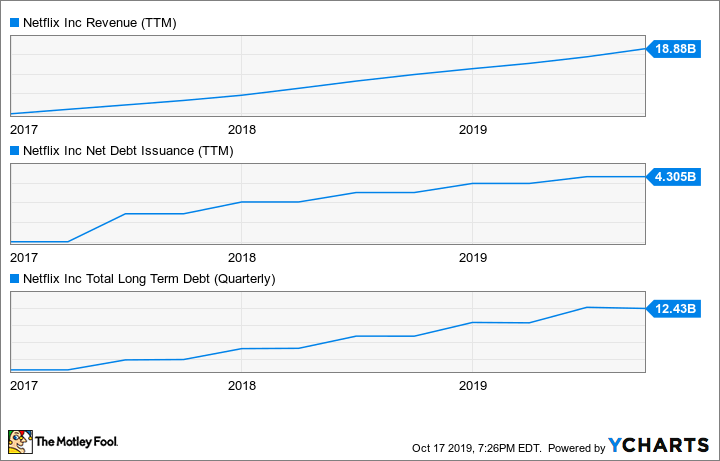 What does all of this mean? For me, it means I'm still not ready to buy Netflix. Maybe at some point -- the company is still a roaring growth stock with 30% annual revenue growth, but that growth is coming at a cost. Debt is growing almost as quickly as the top line, making this a riskier stock than many investors realize. It's not just about competition and whether Netflix can beat it. It's about how it plans to beat the competition, and whether it's worth it.