One of the last sectors investors might have expected to do well this year are cable stocks. After all, isn't cord-cutting happening en masse? Since these cable companies get a large portion of their revenues from selling traditional cable bundles, one would think cable stocks would be suffering, not prospering.

Yet three of the leading cable companies -- Charter Communications (NASDAQ:CHTR), Comcast (NASDAQ:CMCSA), and Altice USA (NYSE:ATUS) -- have all bested the market over the past 12 months, and by a wide margin. 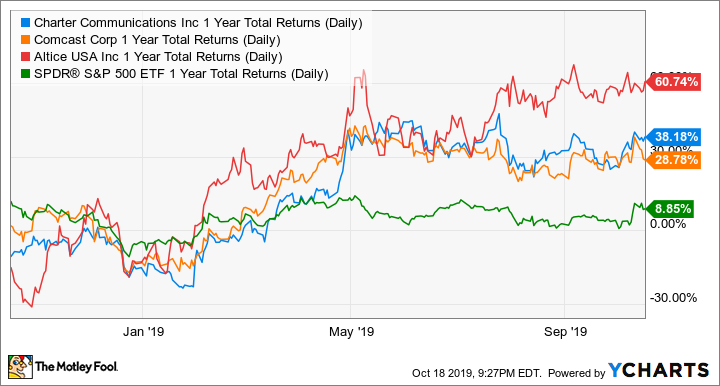 These companies are large, not growing particularly fast (outside of Comcast's acquisitions), and are operating under the cloud of cord-cutting. So, how have they been able to outperform? 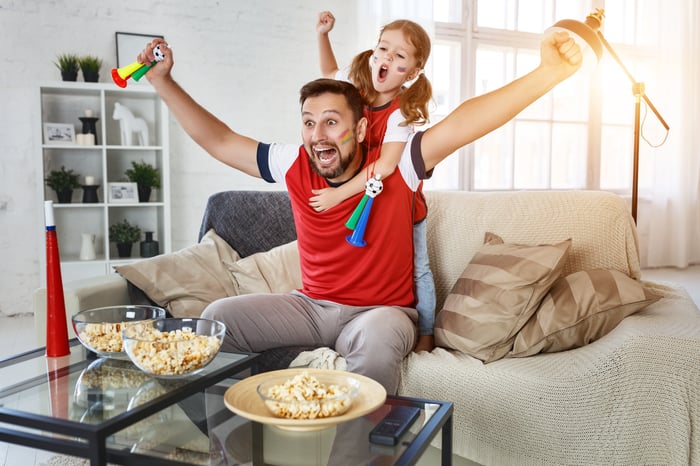 One reason for the outperformance is cable's recession- and China-resistant characteristics. Say what you will about the high cost of cable, but most people don't cancel their broadband or cable service when times get tough. In fact, in an economic downturn, many are likely to stay at home and enjoy indoor entertainment more often -- making broadband and cable services all the more desirable.

Since the trade war escalated earlier this year, investors have been flocking away from internationally focused and cyclical stocks and more toward U.S.-centric and consumer staples names, and cable stocks certainly fit in more with the latter category.

Unfortunately for consumers but fortunately for investors, cable companies are also increasing prices, which will not only offset the continual content cost increases, but will also significantly boost broadband margins. Many cable companies have invested heavily in the DOCSIS 3.1 architecture over the past few years, which allows for faster speeds and two-way communication.

Not only are cable companies now finishing up this big spending cycle, but they are now able to charge more for the higher speeds and capabilities afforded by DOCSIS 3.1. Altice and Comcast raised prices late last year, and Charter is just now pushing through a price increase in October.

3. Cord-cutting isn't as bad as feared... for cable

While cord-cutting is certainly affecting these cable companies, as they continue to lose video customers each and every quarter, there are a few reasons that this phenomenon hasn't been a big headwind to their stock prices.

First, video bundle margins are substantially lower than those of broadband. As evidence, Charter management noted last year that video margins have been declining for 10 years, yet cable companies have been able to grow overall revenue profits in that time.

Part of the reason is that broadband is largely a fixed-cost business. So, as long as a company continues to grow broadband relationships, all of that revenue drops to the bottom line, whereas cable companies have to pay content providers their fees for video packages.

Cable companies have also been growing overall customer relationships, taking market share from satellite and telecom competitors. The DOCSIS 3.1 infrastructure build gave cable a competitive advantage, as satellite video isn't quite as good in two-way on-demand functionality. Satellite customers also either need to get their broadband from a telecom or cable company, which is more of a headache than getting both services from a single company. In a recent note, analysts at Cowen noticed cable's more efficient service has been taking share from satellite providers such as Dish Networks or AT&T's DirecTV service. Cable companies are thus losing far fewer video subscribers than rivals and increasing broadband customers over their fixed cost base.

Cable companies are also aiming to replace video and landline subscriptions with new mobile offerings. No, these cable companies haven't built out their own massive mobile networks, but are rather leasing networks on a wholesale basis from other telecoms. Charter and Comcast teamed up to get better pricing on Verizon's leading natonwide network, while Altice has licensed its network from Sprint.

These companies have stated they not only intend to use mobile as an attractive bundling tool for customer retention, but also plan to make them profitable on a stand-alone basis, once they achieve scale.

Finally, cable companies typically have high levels of debt, since their revenues are relatively steady, and their infrastructure buildouts can be capital-intensive. 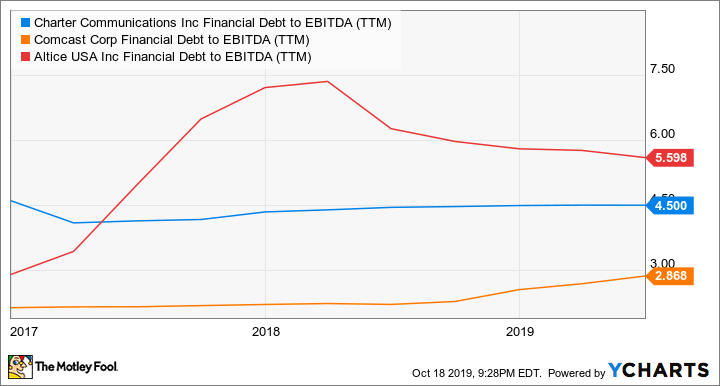 These big debt loads continually need to be refinanced, and since interest rates have been cut twice already this year, with many predicting further rate cuts, cable companies stand to benefit from lower interest expenses going forward.

Unloved by many -- except investors

Consumers typically have a bad relationship with their cable company, but cable stocks have definitely been pleasing investors this year. With lower interest rates, higher prices and margins, and a competitive advantage over satellite and telcos, look for these companies to continue to outperform.