Please ensure Javascript is enabled for purposes of website accessibility
Log In Help Join The Motley Fool
Free Article Join Over 1 Million Premium Members And Get More In-Depth Stock Guidance and Research
By Rich Duprey - Updated Oct 22, 2019 at 8:59AM

The e-commerce giant is making a big leap into deep-discounter territory.

Because buying an item that cost less than $5 on Amazon.com (AMZN -0.77%) often required purchasing something more expensive to qualify for free shipping, Dollar General (DG -0.04%) and Dollar Tree (DLTR -0.81%) were long viewed as Amazon-resistant, if not Amazon-proof. The economics of offering shipping on these cheap goods by themselves just didn't make sense, because the postage would cost more than each item.

Now Amazon has basically said "economics be damned": It's allowing a flood of merchandise priced below $5 to qualify for free next-day shipping through Amazon Prime. Dollar-store chains are the competitors most likely to be crushed by this change in policy. 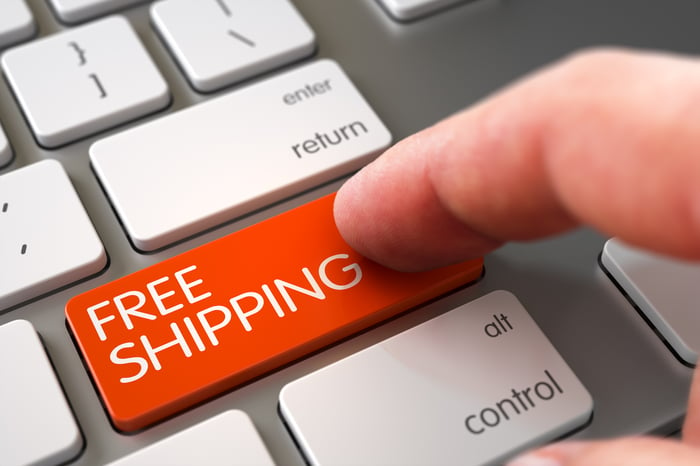 This is not the first foray Amazon has made into the deep-discounter end of the pool. Amazon's "add-on" program identified inexpensive items that could be added to an order valued at $25 or more and, if shipped to the same address, qualify for free shipping. Last year the e-commerce giant began adding sections to its site listing select groups of items priced under $10 and $5 that would qualify for free shipping on their own.

The latest maneuver seems to have removed all the barriers for such low-priced items to qualify. However, according to Recode, analysts at Edgewater Research noticed last month that Amazon apparently turned off the add-on program, which should open the floodgates for these low-cost items to be shipped for free on their own.

Cracks in the wall

Dollar stores have thrived despite the retail apocalypse descending on most of the rest of the industry. U.S. retailers have announced 8,642 store closures so far in 2019, 48% more than all of last year, and Coresight Research's analysis suggests that as many as 12,000 will be closed by the end of the year. Yet dollar stores are in expansion mode.

Dollar General opened over 900 stores last year and is more than halfway to achieving its goal of opening 1,000 stores this year. Dollar Tree has opened over 300 of its namesake stores, including a number of Family Dollar locations that were rebannered under the Dollar Tree name, though the company is reducing the number of Family Dollar stores as it seeks to get back on track.

Also threatened by Amazon's move are larger retailers that view such low-priced items as impulse buys adding to the total average ticket. Target (TGT -0.39%), for example, reported that comparable sales grew 3.4% in the second quarter, helped along by an increase of nearly a percentage point in the size of the average transaction. Recode notes that stores from supermarkets to pharmacies also count on these small items to pad their sales numbers.

Pirating sales from all over

There is something still to be said for going to a dollar store and searching out what's new on its shelves; these chains have long prided themselves on the "treasure hunt" atmosphere giving them a competitive advantage. Yet being able to quickly look up a small item online and have it delivered free of charge the next day may be better than the excitement of discovery.

Perhaps the more important takeaway for investors: This shows once again that no business should be considered safe from Amazon's competitive pressure.