Please ensure Javascript is enabled for purposes of website accessibility
Log In Help Join The Motley Fool
Free Article Join Over 1 Million Premium Members And Get More In-Depth Stock Guidance and Research
By Adam Levine-Weinberg - Oct 22, 2019 at 10:51AM

Focusing on proven franchises has led to enormous box-office success for Disney, but it's not a foolproof strategy.

In recent years, Walt Disney (DIS -0.11%) has released a parade of sequels, spinoffs, and reboots that build on its most popular franchises. This strategy has helped Disney dominate the U.S. and global box office. In two of the past three years, Disney films have captured more than a quarter of domestic box office receipts, beating the studio's closest rival by nearly 10 percentage points.

However, while this strategy has been extremely successful, it isn't foolproof. Investors were reminded of that this weekend, as highly anticipated Maleficent sequel Maleficent: Mistress of Evil came up well short of expectations at the domestic box office.

Disney entered this weekend on pace for its biggest annual box office victory yet. The House of Mouse had already grossed more than $2.8 billion in the U.S. and Canada this year from 10 films, not including movies from the recently acquired 20th Century Fox studio. That put its year-to-date domestic box office share at 32.1%, more than double that of its nearest rival.

The vast majority of Disney's year-to-date box office haul has come from five blockbusters: Avengers: Endgame, The Lion King, Toy Story 4, Captain Marvel, and Aladdin. Those five movies all rank among the top six movies of the year for the domestic market, which includes Canada. Combined, they have grossed more than $2.6 billion domestically, led by Avengers: Endgame's $858.4 million domestic haul, good for No. 2 all time.

Disney's biggest box-office disappointment of the year came this past weekend, with the release of Maleficent: Mistress of Evil. Back in 2014, Disney's Maleficent -- a live-action adaptation of the animated classic Sleeping Beauty, told from the perspective of the original film's villain -- became an unexpected smash hit, grossing $241.4 million in the domestic market and $758.5 million worldwide. Disney looked to repeat that success this fall with a sequel. 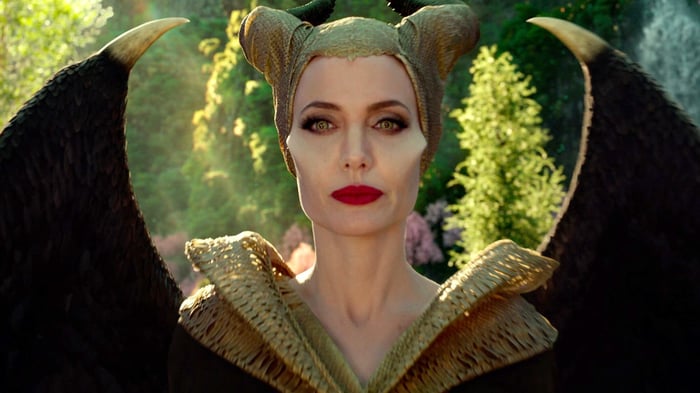 Unfortunately, Maleficent: Mistress of Evil got off to a terrible start, grossing just $36.9 million at the domestic box office on opening weekend. That was barely more than half of Maleficent's $69.4 million opening-weekend haul from five years ago. The studio -- and industry pundits -- had expected a much stronger opening, albeit not at the level of the original Maleficent film.

To be fair, strong audience reviews should allow Maleficent: Mistress of Evil to surpass $100 million at the domestic box office this year. In addition, the movie started strong outside the U.S., bringing in $118.1 million overseas on opening weekend. That said, revenue splits are far less favorable for studios in key international markets like China than in the domestic market. As a result, Maleficent: Mistress of Evil faces an uphill battle just to be profitable for Disney.

Fortunately for Disney, the poor showing from the Maleficent sequel doesn't mean the studio is doomed to end 2019 on a sour note. In fact, the House of Mouse has two highly promising titles queued up for release in the last two months of the year.

First up is Frozen 2, which will hit theaters on Nov. 22. The original film grossed more than $400 million at the domestic box office in late 2013 -- and nearly $1.3 billion globally -- and the cultural impact of the film has only grown over the years. The poor box office performance of Maleficent: Mistress of Evil serves as an important reminder that there are no sure things in the movie business. Nevertheless, Frozen 2 represents a higher-probability bet by Disney and could easily surpass the original's impressive box office haul.

Finishing off the year, Disney will release Star Wars: The Rise of Skywalker on Dec. 20. The final film in the current Star Wars trilogy is virtually guaranteed to be a hit at the box office. Both of the previous installments were released in mid-December -- just slightly earlier than this year's Star Wars film -- and had grossed more than $500 million before the end of those years.

Thus, Disney is on track to blow past its record-setting 2018 domestic box office haul of $3.1 billion. Maleficent: Mistress of Evil's poor start will make it hard to reach $4 billion in domestic box office receipts, but even that remarkable milestone may be within reach. This will get Disney off to a great start in its new 2020 fiscal year, potentially paving the way for Disney stock to deliver another strong performance.