Please ensure Javascript is enabled for purposes of website accessibility
Log In Help Join The Motley Fool
Free Article Join Over 1 Million Premium Members And Get More In-Depth Stock Guidance and Research
By Mark Prvulovic - Oct 22, 2019 at 6:00AM

The company has given back most of its 2019 gains, but does this change its previously bullish appraisal?

One of the current top-performing autoimmune disease biotech firms in the market, at least in terms of performance, is TG Therapeutics (TGTX -1.06%). Throughout the first half of 2019, TG Therapeutics was one of the most promising biotech stocks in the sector, with shares rising by as much as 224% between February and July. However, this all seemed to change in Q3 as the stock has quickly given back the majority of its previous gains, falling 42% since early July.

While it's normal in the world of biotech for stocks to rise and fall significantly over a short period of time, some investors are wondering whether the stock is still a good buy at its reduced price. Below we'll look at a few reasons why this company may or may not be a better buy now that its price has fallen significantly. 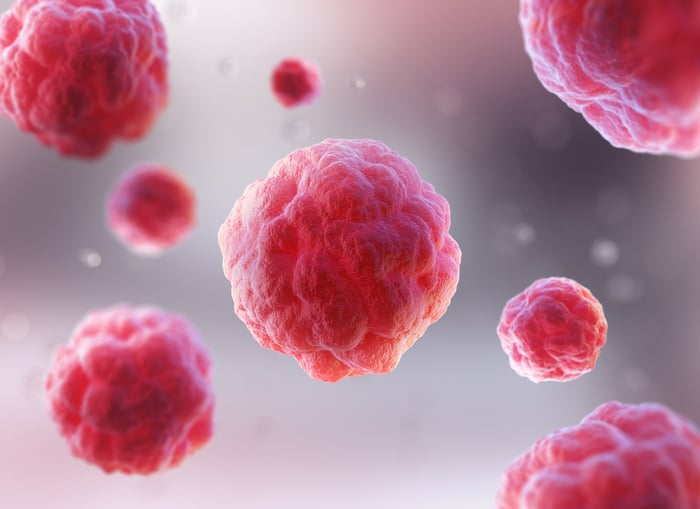 TG Therapeutics is focused on developing drug candidates for relatively untreated blood cancers and autoimmune diseases. Currently, the company has two late-stage candidates, TG-1101 (also known as ublituximab, or just ubli) and TGR-1202 (known as umbralisib, or simply umbra). Both drug candidates have shown highly promising results thus far. Ubli is an antibody that inhibits a key antigen known as CD20 in blood cancer cells, while umbra works to suppress an enzyme known as PI3K, which plays a key role in the multiplication of cancer cells.

Additionally, both compounds are being used in a phase 3 clinical trial to see how effective they are in treating non-Hodgkin lymphoma as well as chronic lymphocytic leukemia. Cancer cells can evolve and become resistant to a particular treatment due to their rapid multiplication rate. That's why both ubli and umbra are being tested together in this trial, as using a multitude of cancer treatments simultaneously can be more effective in wiping out cancer cells than simply taking one treatment at a time.

Earlier in the year, TG Therapeutics reported strong results for umbra as a treatment for marginal zone lymphoma (MZL). Specifically, umbra received both an orphan drug designation as well as a breakthrough therapy designation from the FDA, a significant achievement for the biotech company.

In late September, TG Therapeutics announced results for its umbra/ubli drug combination. The results were once again positive, with efficacy data from 69 patients involved in the trial showing that the combination had an impressive 72.5% clinical benefit rate across all the various types of blood cell cancers that were present among patients.

Dr. Matthew Lunning, from the University of Nebraska, who had been studying umbra and ubli since 2014, had this to say:

From a safety standpoint, the combination was generally well-tolerated. Some notable findings included that colitis and hepatic toxicity were nearly absent in this population and overall, we observed relatively low rates of immune-mediated toxicities and opportunistic infections, in contrast to the experience with other PI3K delta class members. Taken together, I believe the toxicity, tolerability and efficacy profile make this combination a promising treatment option across B-cell lymphomas and a potential backbone for future triple and quad combinations.

While the long-term prospects for TG Therapeutics' drug candidates seem promising, it is worth taking time to pore through the financials, even though as it's a young biotech stock, these financial figures will change drastically in the upcoming years.

For small biotech companies with promising drug candidates, one of the top things to look out for is that the business has enough cash to cover its expenses for at least the next 12 to 18 months. TG Therapeutics has around $85 million in cash and equivalents according to its recent Q2 financials. In comparison, net losses for the quarter came in at $36.2 million.

While lower than the $44.1 million net loss seen in Q1, a 17.9% improvement over just three months, it's still a significant chunk of the company's cash reserves. At this rate, it's clear that TG Therapeutics will need to seek additional financing sometime in 2020.

Some investors may be able to overlook the fact that TG Therapeutics will need more financing in the future, but the big issue here is that TG Therapeutics is already competing in a crowded field. Pharmaceutical giants such as Gilead, Bristol-Myers, and AbbVie (ABBV -0.06%) are all competing in the blood cancer and hematology fields with drugs candidates that have seen comparable results to TG's umbra and ubli.

AbbVie in particular has been emphasizing its leukemia drug Venclexta, which has already received recent positive recommendations from major lymphoma institutions in North America. On the other hand, the overall size of the blood cancer market is quite large, with current estimates projecting it to reach $64.8 billion by 2023 (an 11% annual growth rate from the $38.5 billion in 2018). The sheer size of the blood cancer market could mean that even if TG Therapeutics' drug candidates get outclassed by rival therapies, it only needs to capture a small portion of the market share to become a financial success. This is especially true considering the relatively small size of TG Therapeutics compared to its competitors.

At the same time, the variable nature of patients and their responses to medication means not every patient will respond the same way to each drug. Sometimes cancer cells become resistant to one particular treatment, with patients having to switch to alternative therapies at that point. Given that, it's likely TG Therapeutics' drugs could find some measure of secondary success as an alternative, second-line therapy if they fail to outperform their competitors.

Does this make TG Therapeutics a buy?

All this makes TG Therapeutics an interesting case. At the moment, the handful of biotech analysts covering the stock on Wall Street all have buy ratings on the company. However, taking into consideration that TG Therapeutics is burning through cash and facing significant competition from other, well-known pharmaceutical giants, things don't seem as positive as one would image from reading only the clinical trial results.

While it's true that TG Therapeutics' drug therapies only need to capture a small portion of their intended markets for the company to be a financial success, such a reality is still quite far away, and much can happen in the meantime. If you're looking for a speculative biotech investment, TG Therapeutics could warrant a small position in a high-risk, high-reward portfolio. For the majority of investors, though, it's best to wait perhaps until the end of 2019 to see if prices fall more and whether further updates are released before considering the stock a potential buy.