Please ensure Javascript is enabled for purposes of website accessibility
Log In Help Join The Motley Fool
Free Article Join Over 1 Million Premium Members And Get More In-Depth Stock Guidance and Research
By George Budwell - Oct 22, 2019 at 8:58AM

Biogen's shares are getting a boost from a pair of catalysts this morning.

Biotech heavyweight Biogen (BIIB 0.97%) saw its shares rise by as much as 43.7% in premarket trading Tuesday morning. The biotech's stock caught fire in early action in response to a pair of catalysts:

1. Biogen shocked the industry this morning by announcing that it plans on pursuing a regulatory application for the Alzheimer's disease candidate aducanumab in the United States. This high-value drug candidate was widely thought to be destined for the scrap pile after flaming out in twin late-stage trials earlier this year.

2. The biotech also released its 2019 third-quarter earnings ahead of the bell this morning. On this front, Biogen handily beat FactSet's consensus estimates for both earnings per share and revenue for the three-month period, giving investors another solid reason to bid up the company's shares.

Biogen's decision to sally forth with an aducanumab regulatory filing in early 2020 reportedly centers around a new data analysis. The company said that this analysis showed that early Alzheimer's disease patients receiving the high-dose treatment of aducanumab exhibited a statistically significant reduction in clinical decline at week 78. 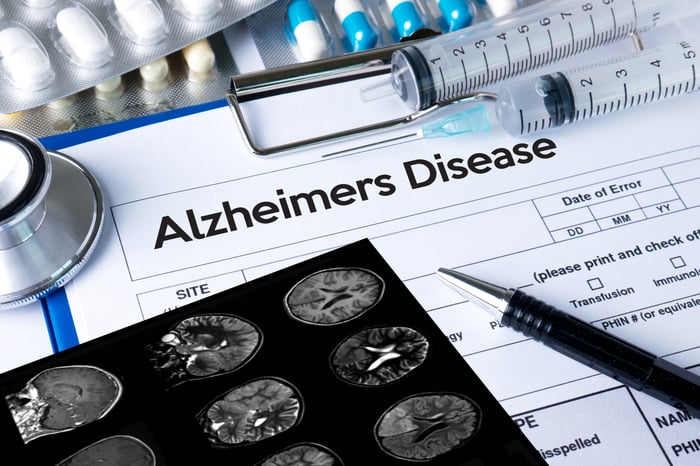 In regard to the biotech's Q3 report, Biogen's better-than-expected multiple sclerosis revenue for the three-month period, combined with skyrocketing Spinraza sales, were the primary drivers behind this earnings beat.

Biogen has been kicking the can down the road on a possible bolt-on acquisition for several years at this point. Today's aducanumab news is almost certainly the reason behind the company's hesitation to pursue such a costly business development move.

The long and short of it is that aducanumab would be a game changer for the biotech from a revenue-generation standpoint. That said, the drug's regulatory review is anything but a slam dunk. Investors might want to think twice before chasing this red-hot biotech stock today.