Please ensure Javascript is enabled for purposes of website accessibility
Log In Help Join The Motley Fool
Free Article Join Over 1 Million Premium Members And Get More In-Depth Stock Guidance and Research
By Dave Kovaleski - Oct 23, 2019 at 7:00AM

This newly public company helps independent advisors with key services -- and it's taking market share in an industry niche that's transitioning toward its strength.

AssetMark Financial (AMK 2.24%), which went public in July, is emerging as a major player in turnkey asset management programs, or TAMPs. A TAMP is a platform that allows financial advisors, broker-dealers, banks, and others to outsource certain investment management functions and services. They provide access to a range of automated processes, including account opening, portfolio construction, financial planning, billing, reporting, and goal analysis, among other services.

TAMPS are not a new concept, but they are becoming increasingly popular because they save advisors the time and money it would take to build out their own infrastructure. That's a big investment, particularly for those with limited resources. AssetMark says it's found that outsourcing saves advisors about eight hours per week and 17% in operating costs.

AssetMark (hereafter AMF) is one of the leaders in the TAMP market, with about $56 billion in assets under management (AUM). That's third behind Envestnet, which has about $500 billion in AUM, and SEI with $65 billion. But AMF has been gaining market share and is in the sweet spot of the transitioning financial advisor market. Regulations and trends affecting the way financial advice is dispensed are playing right into its strengths. 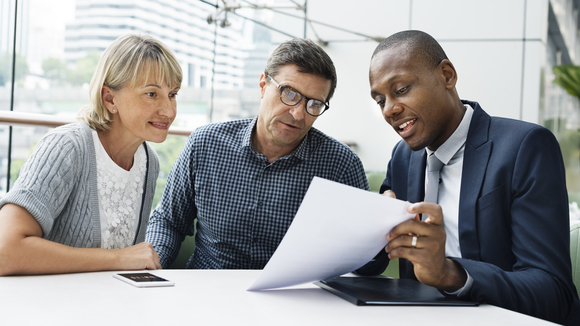 How the market is changing

Financial advisors manage a total of about $20 trillion in assets in the U.S., and that number is expected to climb to $25.5 trillion by 2022, according to financial research firm Cerulli Associates. A growing piece of that pie is going to independent financial advisors, which are those that are not affiliated with a large brokerage firm like Edward Jones or Charles Schwab. Independently advised assets are expected to increase from $8.4 trillion in 2017 to $12.1 trillion in 2022 -- which is about 48% of overall advisor assets. Currently, it represents about 42%. Over the past five years, the independent channel has grown faster than the traditional channel -- up about 11% per year compared to the overall growth of about nine percent per year during that span. This is obviously good for AMF, which works with independent advisors.

There has also been a shift from commission- to fee-based financial advice. Advisors got 67% of their total revenue from fees in 2018 -- an all-time high. Back in 2013, it was only about 40%. Part of this has been driven by regulatory changes -- specifically the Labor Department's fiduciary rule, which said that advisors had to serve as fiduciaries, making them legally obligated to serve in the client's best interest. The previous standard simply required to advisors to find suitable investments for their clients. While the fiduciary rule has never been fully established -- it was killed in 2018 but might be revived, and it was replaced with the SEC's Regulation Best Interest, which lacks the same teeth -- the fiduciary standard has precipitated a shift toward flat fees and away from commissions, which come from the investment products advisors sell to clients.

AMF supports the fiduciary standard and works with just fee-based advisors. This puts the firm in a good spot, as CEO Charles Goldman explained in AMF's second-quarter earnings call. "As more and more advisors adopt that type of (fiduciary) standard, and therefore, need to do real due diligence on the portfolios they construct, they need to have real process and procedure around how they do what they do. The outsourcing model is a great choice for them," he said. "So we think that moving toward that fiduciary standard is not only great for consumers, it's great for advisors; and if it's great for consumers and great for advisors, then it's great for us."

While the sector has seen rapid growth in the past few years, there is still much room for growth, as TAMPs are used by only about a quarter of financial advisors. Further, about $2.2 trillion of the $20 trillion in financial advisor assets use TAMPs. "This is a large and growing market that has tremendous tailwinds. We believe that our current offering and growth plans are well positioned to capitalize on these favorable industry trends," said Goldman, who just signed a new three-year contract.

Where does AssetMark stand?

AMF has roughly 7,900 advisor clients that serve more than 155,300 investor households, and last year it added about 500 new advisor clients. Since going public in July at $22 per share, AMF's share price is up to about $27. AssetMark saw its revenue increase 17.7% year over year in the second quarter, which was a higher growth rate than its main competitors -- including Envestnet, which saw sales rise 11.6%. AssetMark had $1.5 billion in net flows for the quarter, its ninth straight over $1 billion. AMF charges clients a quarterly fee, and 99% of its revenue is recurring.

One key differentiator for AMF is its technology: The company has invested $153 million in platform upgrades over the past five years to provide more tools and services for advisors. Another is its consulting team and customer service, with over 200 people in the field assisting clients. In a recent survey sponsored by Orion Advisor Services and Morningstar, AssetMark had the highest customer satisfaction scores among the major players.

In addition, AMF offers a curated investment platform that features portfolios from about 20 asset managers including two in-house providers. AMF's investment professionals offer custom portfolios to meet investors' needs. Leadership is also considered a strength, as Goldman, with experience leading institutional arms at Fidelity and Schwab, piloted AMF to 17% annualized growth in the four fiscal years before it went public.

As AMF has gained scale, it has become more active in acquisitions. In October, AMF acquired OBS Financial from Canandaigua National Corp., a TAMP with about $2 billion in AUM from about 300 financial advisor and 21 bank trust clients. It's the second small TAMP AssetMark bought this year. In April it acquired Global Financial Private Capital, bringing in $3.8 billion in AUM.

AMF has a market share of about 10%, up from 4% in 2014. It has become a major player in a fast-growing niche within a market that's transitioning toward its strength, and it's definitely a company to watch.

Should You Own This Financial Stock in 2020?