Despite uneven results in parts of the cruise industry, investors have high expectations for Royal Caribbean's (NYSE:RCL) upcoming earnings report. The vacation specialist has posted robust growth in each of its last three quarterly announcements, with healthy passenger volume helping it avoid the fate of rival Carnival (NYSE:CCL), which has lowered its 2019 outlook twice.

Royal Caribbean likely will have downbeat comments about a few of its global markets when it reports results on Friday, Oct. 25. But, as we'll cover below, the broader growth picture should remain positive. 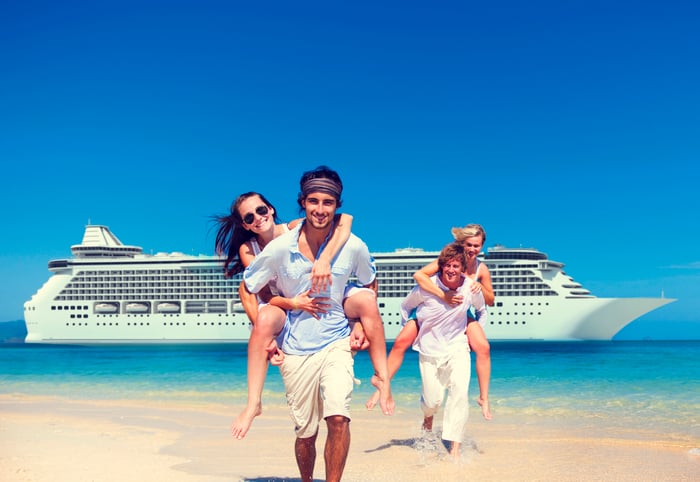 Net revenue yields, a core industry growth metric, landed at just below 10% last quarter to stay in line with management's upgraded outlook. Expectations are for a modest slowdown this time around, with growth of around 8%. Carnival, by comparison, saw its net revenue yields fall into negative territory in the most recent quarter.

Carnival cited several markets that were struggling with weak demand, including parts of Europe, when explaining the growth shortfall. Investors will learn this week whether Royal Caribbean was caught up by some of the same negative trends. For its part, management expressed confidence back in July that cruise demand in the U.S. and China would support another record year for the cruise giant.

Other metrics that will provide clues about a potential slowdown include passenger volume and occupancy rates. Cruise passengers were up 12% through the first half of 2019 as occupancy held steady at 108% (indicating a few double-occupancy cabins filled with three or more people). Royal Caribbean needs similarly strong numbers in the next two quarters to meet its ambitious growth outlook.

Fuel price swings are creating volatility in reported profits, but investors can get a clearer picture of profitability this week by following adjusted net cruise costs. That figure was 9% last quarter and trailed net revenue yields by less than a percentage point. In other words, Royal Carribean's cruises became more profitable.

Executives said in July that this trend will flip in the third quarter thanks mainly to the timing of expenses and more capital investments into projects like CocoCay's "Perfect Day" resort. That projection was made before Hurricane Dorian impacted the Bahamas, though, and so shareholders will be looking for a fuller accounting of the costs around that storm in this week's report.

Carnival lowered its growth outlook in September while describing tough selling conditions in places like southern Europe and the Arabian Gulf. The cruise ship leader sees a slight drop in net revenue yields ahead for the full year compared to a 4% increase in 2018.

Royal Caribbean's latest forecast calls for growth of about 8% and a modest boost in profitability as cost inflation lands at around 7.5%. Investors might see updates to each of those numbers on Friday, though. The company will also likely comment on the demand and pricing picture heading into 2020 since it has likely already booked most of its capacity up for those voyages. Whether the stock continues its 2019 rally will depend on the tone of those outlook comments by CEO Richard Fain and his team.