Freeport-McMoRan (NYSE:FCX) continues to struggle due to a weak copper market. That was once again evident in the third quarter, as the mining company posted another loss.

However, while Freeport-McMoRan is losing money right now, it sees much better days ahead as it executes its strategic plan. That's one of the reasons why it's among the most compelling copper stocks to buy these days.

That loss was Freeport-McMoRan's second straight one this year and came as a surprise, given that Wall Street analysts expected the company to break even during the third quarter. Driving that disappointing result was lower copper, gold, and molybdenum production, along with weaker copper prices and higher operating costs.

Overall, copper production slumped 14% to 864 million pounds while its gold output plummeted 56% to 333,000 ounces. That's due in large part to the government-mandated sale of its majority interest in the Grasberg copper and gold mine in Indonesia at the end of last year. In addition to that, copper sales in South America declined due to the timing of shipments and lower ore grades, which it partially offset with higher volumes from its mines in North America.

The sale of part of Freeport-McMoRan's stake in the low-cost Grasberg mine also impacted its copper production costs, which rose from $0.93 per pound in last year's third quarter to $1.59 per pound this year. Making matters worse, the price of copper slumped from $2.80 per pound to $2.62 per pound.

Because of those factors, Freeport-McMoRan only generated $224 million in operating cash flow during the quarter, which is roughly $1 billion less than it produced in the year-ago period. That wasn't nearly enough to cover its $666 million in capital expenditures, which caused it to eat into some of its cash position. As a result, it ended the quarter with $2.2 billion in cash, down from nearly $4.6 billion in the year-ago period. 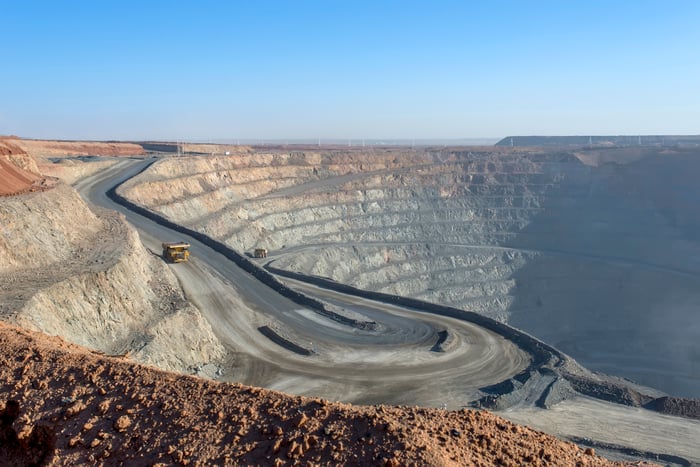 A look at what's ahead for Freeport-McMoRan

While the sale of part of its stake in Grasberg has been a near-term drag on Freeport-McMoRan's operations, it sees much better days ahead. The company and its local partner have been transitioning Grasberg to underground mining operations, which should boost that mine's production and cash flow over the next few years. In addition to that, Freeport-McMoRan has been investing in the Lone Star project in the U.S., which should start producing copper next year. It has also been working on some innovation initiatives to drive productivity improvements at its legacy mines, which should begin enhancing their profitability next year.

Those three major initiatives have the company on track to generate strong production and earnings growth over the next two years. In Freeport-McMoRan's estimation, its copper output will increase by 30% from this year's level by 2021, while its gold production will surge 70%. Meanwhile, it sees its unit costs falling by 25% over that time frame as it spreads expenses over that higher production. That leads Freeport-McMoRan to believe that its adjusted EBITDA -- which has tallied $2.7 billion over the past 12 months -- will more than double by 2021 with no improvement in copper prices.

Meanwhile, earnings could grow even more if copper market conditions begin recovering since every $0.10-per-pound improvement in pricing would yield $425 million of incremental EBITDA in 2021. An uptick in pricing seems likely in the view of analysts, with Woods Mackenzie, for example, believing that copper needs to rise to at least $3.30 per pound to incentivize mining companies to increase supplies to meet projected demand growth.

This mining stock has enticing upside

Freeport-McMoRan continued to struggle during the third quarter. Not only did it feel the impact of the sale of some of its interest in Grasberg, but it also dealt with lower copper prices.

However, the company is investing in a couple of key projects that will grow its low-cost copper and gold output. As a result, it's on track to deliver significant production and earnings growth by 2021 without any market improvements. Meanwhile, it has even greater upside if conditions improve. That enticing growth potential makes Freeport-McMoRan one of the best copper mining stocks to consider buying for the long term.