Snap (NYSE:SNAP), creator of the social networking app SnapChat, is making a comeback, and its daily active user growth and positive second-quarter earnings surprise are winning over some investors. Joining the optimistic chorus, Bank of America last week raised its rating on Snap shares from neutral to buy.

The Santa Monica, California, social media company has come a long way from the days that followed its March 2017 IPO, when its stock plummeted 28% below its offering price within the first two weeks. A heavily criticized late-2017 overhaul of its app didn't help matters. Many of its users took their social posting elsewhere, including to Facebook's (NASDAQ:FB) Instagram -- which had already been chipping away at its appeal. Advertisers couldn't figure out how to use Snapchat, let alone market on it, further hurting Snap's business outlook and its stock price.

But more recently, the company has been on an upswing. The stock, while still trading below its initial public offering price, has surged from $5.51 a share at the start of the year to about $14 a share now (a 154% gain). Beyond the strong results already in the books for 2019, management has expressed optimism about the remainder of the year. And some of its new features are resonating with users. Two lenses it released this year -- one that lets customers see how they would look as a different gender and another that morphed them into babies -- were used by millions of people. 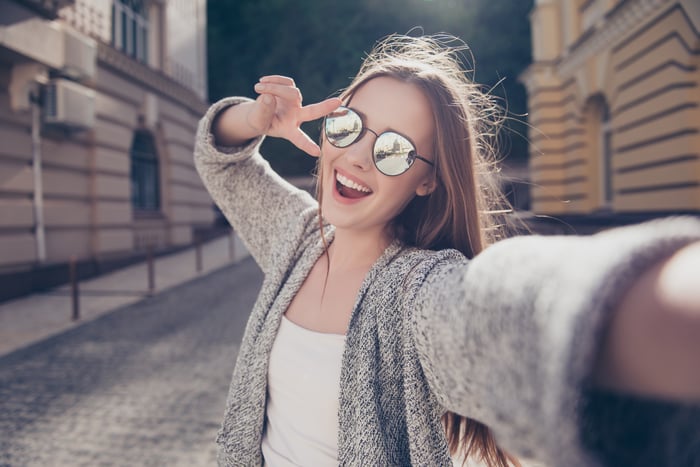 TikTok lurks in the background

In September 2017, ByteDance spent nearly $1 billion to acquire Musical.ly, a lip-synch mobile app, which it merged into the TikTok social media app it had launched a year prior. With the app, teens, young adults, and professionals can quickly edit short videos and share them with their network of friends. In the year since its U.S. debut, it has become hugely popular with Generation Z.

Despite TikTok's increasing U.S. presence, Snap bulls have brushed it off as a competitive threat. They acknowledge TikTok is stealing some of Snap's thunder, but argue the mobile apps fill different needs for consumers and can easily coexist. SnapChat is where people go to have private conversations and share cool filters and lenses. TikTok is for making fun videos and sharing them with the world.

But if TikTok incorporates some of Snap's core functions, it could become more of a direct rival. As it continues to grow and more advertisers take notice, TikTok could also siphon advertising dollars away from Snap. It's already teaming up with some big U.S. brands including Walmart, the NFL, Macy's, and Kroger, all of which are running video campaigns on the app.

Snap fans are focused on its successes

For now, supporters of Snap aren't too worried. Bank of America's analysts focused on the launch of new shows on Discover, Snap's video platform, as a reason to like the stock, predicting they could lead to an expansion of its average revenue per user. While TikTok could be a threat down the road, for now, any sell-off in the stock should be seen as a buying opportunity, they argued.

Also worth paying attention to is Snap's dynamic ads option, which has been in beta for about a year and just launched broadly this month. With it, brands and marketers can allow Snapchat to design new ads for them in real time, based on users' known preferences.

But not everyone on Wall Street is discounting TikTok's reach. They may give Snap credit for executing on point for the past year. They may recognize that the recent overhaul of Snapchat for Android has boosted engagement and see how Snap Games could become a revenue driver. Nevertheless, they are also concerned about the threat from TiKTok in an environment where competition for advertisers' dollars is fierce.

Snap already has to contend with Facebook and Instagram. Another strong competitor could be too much for it to handle. If Snap's history of rocky growth is any guide, investors have every reason to worry. Nobody should be dismissing a rival of TikTok's caliber.