Please ensure Javascript is enabled for purposes of website accessibility
Log In Help Join The Motley Fool
Free Article Join Over 1 Million Premium Members And Get More In-Depth Stock Guidance and Research
By Leo Sun - Oct 23, 2019 at 11:00AM

The beauty products giant reverses its prior strategy of “go big or go home.”

Shares of Coty (COTY 2.09%) recently popped after the beauty products maker announced that it was exploring the divestment of its professional beauty business, its associated hair care brands, and its Brazilian unit. It's unclear how much those businesses would fetch in a sale, but they generated $2.7 billion in revenue (31% of Coty's top line) last year.

Coty plans to apply the proceeds toward reducing its debt and boosting shareholder value with buybacks and dividends. Coty stated that the strategic shift would enable it to focus more on the growth of its fragrance, cosmetics, and skin care businesses.

Shrinking its business marks a reversal from Coty's strategy following its acquisition of P&G's (PG 1.29%) specialty beauty business three years ago -- the company's strategy previously focused on scaling up its business to boost its margins.

But the shift also wasn't surprising, since many investors -- including the company's top shareholder, the German conglomerate JAB -- thought Coty had bit off more than it could chew. Last November, JAB pushed Coty's board to appoint industry veteran Pierre Laubies to become its fourth CEO in four years. It also subsequently boosted its stake from 40% to 60% earlier this year to gain complete control of the company.

Coty's new direction under JAB looks promising, but will it help the stock rebound from its 50% decline over the past three years?

What happened to Coty?

The consumer unit, which was expanded significantly by the P&G deal, remains a dead weight due to soft demand for its beauty products in North America and Europe. It attributed those declines to weak demand for its hair care and cosmetics in a crowded market, which were only partly offset by stronger sales of its body care products. Supply chain issues in the beginning of the year exacerbated that pain.

However, Coty's consumer unit remains stronger in other markets in Asia, the Middle East, Africa, and Latin America, with Brazil being a standout market with its "consistent strength and share gains" in the fourth quarter. 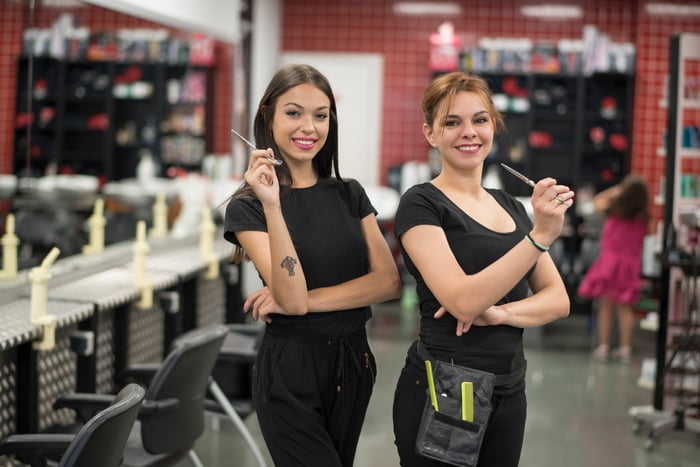 The professional unit, which sells products to salons, was once a core growth engine for Coty. However, soft sales of hair products in North America and supply chain disruptions caused the unit's growth to grind to a halt. Those declines were only partly offset by higher e-commerce sales, which only account for a "low teens" percentage of the unit's sales.

Can Coty streamline its business?

Coty is weighed down by a lot of weak brands, so it makes sense to streamline its business. Divesting the professional beauty business initially seems odd, since the unit's adjusted operating margin expanded 190 basis points to 12.1% in 2019, versus operating margins of 6.2% and 15.5% for its consumer beauty and luxury businesses, respectively.

However, the divestment could also reduce Coty's overall exposure to the tough hair care market. In 2019, Coty's total sales of retail hair color products (which accounted for a mid-teens percentage of its total revenue) fell by the high single digits due to weak demand for its Clairol products.

Coty notes that it could easily divest the professional hair division because it's "operationally distinct", with its own management and stand-alone business structures. It describes its Brazilian business in the same way.

However, selling the Brazilian unit would still be surprising, since Coty constantly highlights Brazil as one of the few bright spots in its consumer beauty business. Divesting that business could make it tougher for the struggling unit to grow again.

Coty ended 2019 with $7.4 billion in debt and a free cash flow of just $213 million, so it makes sense to raise more cash and reduce its leverage. It also makes sense for Coty to focus on improving its higher-growth fragrance, cosmetics, and skin care businesses.

However, its promise to return any excess cash to shareholders raises eyebrows, since that cash would arguably be better applied toward marketing or improving its remaining businesses. Therefore, investors shouldn't jump to conclusions before Coty actually completes the divestments and demonstrates that it can grow its revenue again as a smaller company.