A minor clinical trial success has been followed by a big share offering.

Shares of OPKO Health (OPK 0.39%), a diagnostics and biopharmaceutical company, fell hard today after the company announced a secondary share offering. Investors unhappy about dilution of the value of their shares pushed the stock 14.2% lower on Thursday.

After losing $141 million in the first half of 2019, the company finished June with $111 million in cash on its balance sheet and $68 million of high-interest debt that's due in 2020. That leaves it without a lot of options at the moment. Today the company announced a plan to raise $100 million by creating heaps of new shares that will dilute the shares investors have been holding. 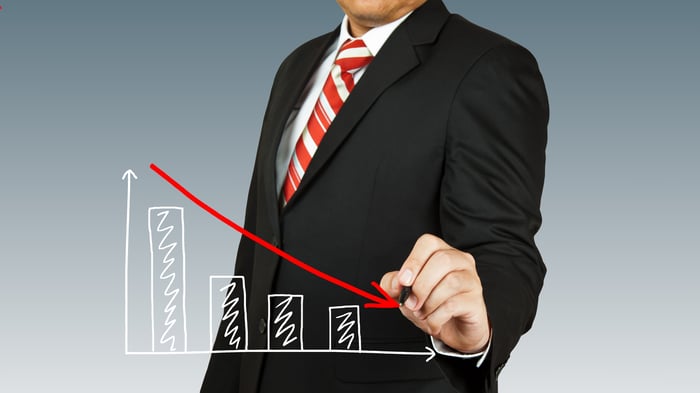 OPKO hasn't announced pricing for its upcoming offering, but the dilution will be significant. The stock has fallen to just $1.63 per share. If it gets lucky and sells 50 million shares at $2 each, the outstanding share count will swell by around 14%.

OPKO announced its impending share offering shortly after announcing success in a non-inferiority test with somatrogon, a once-weekly growth hormone injection for children who don't produce enough on their own. The current standard, Genotropin from Pfizer (PFE -0.63%), is just as effective, but parents need to inject their children every day.

OPKO developed somatrogon in partnership with Pfizer and will receive a tiered royalty percentage that tops out in the mid-20s if it's approved. Somatrogon approval could push this biotech stock much higher in the short term, but anyone hoping the royalties will allow the company to finally stop losing money should prepare for disappointment. In the first half of 2019, Genotropin sales sank 15% to just $232 million.