Please ensure Javascript is enabled for purposes of website accessibility
Log In Help Join The Motley Fool
Free Article Join Over 1 Million Premium Members And Get More In-Depth Stock Guidance and Research
By Demitri Kalogeropoulos - Oct 24, 2019 at 11:30AM

Investors haven't been thrilled with Kimberly-Clark's (KMB 0.01%) unimpressive operating trends in recent quarters. But they've pushed the stock higher in 2019 anyway on hopes that faster growth in the consumer products industry, plus higher profitability, will support better returns for shareholders.

On Tuesday, the maker of Kleenex tissues and Huggies diapers issued earnings results that supported that bullish reading. However, the latest numbers show that Kimberly-Clark's market share position is worsening even as rival Procter & Gamble (PG -0.03%) enjoys its fastest growth rate in over a decade. 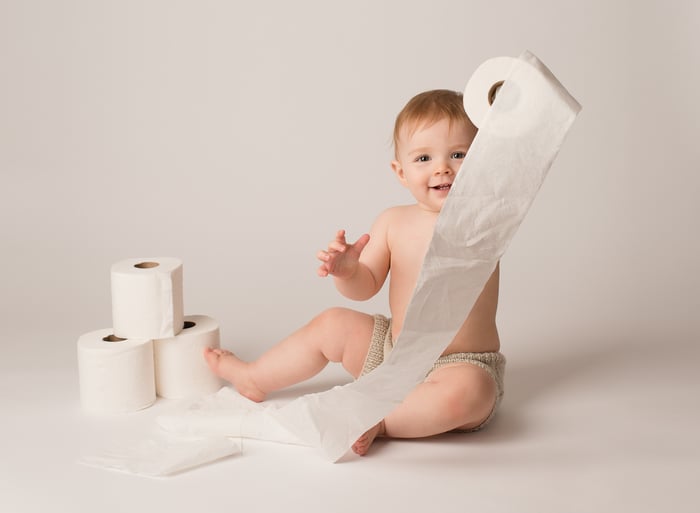 Organic sales gains were weak, both in terms of the actual metric and its momentum. That core growth metric landed at 4% in the fiscal third quarter, marking a slowdown from last quarter's 5% boost. P&G notched a more robust 7% spike that held steady from the previous quarter to again set an over 10-year high for the business. The gap there shows that Kimberly-Clark hasn't been able to arrest the P&G's market share momentum, given that the two compete head-to-head in key niches like diapers.

Kimberly-Clark's growth also looks sluggish when you break down its mix between volume and pricing gains. While P&G announced 4% higher volume and a 3% contribution from rising prices, Kimberly-Clark had to rely entirely on prices, as volume fell 1%. Industry giants, including Unilever, all aim for balance between these two metrics, ideally with volume leading the way since that's the best way to ensure sustainably rising market share.

On the bright side, Kimberly-Clark's finances are looking strong. The rising prices on products like diapers and tissue paper combined with cost cuts to push operating profit higher by 8% this quarter to $859 million. This boost happened despite more spending on marketing and on bulking up the supply chain and the pipeline of brand innovations. "I'm encouraged by the progress we're making this year while we invest more for longer-term success," CEO Mike Hsu said in a press release.

The cash picture is brighter, too, with soaring cash flow providing plenty of ammunition for management to direct toward growth projects and direct shareholder returns. On that score, Kimberly-Clark spent $214 million buying back its stock on its way toward an expected $800 million full-year outlay.

Like P&G, Kimberly-Clark lifted its 2019 outlook on both earnings and sales this week. The company now sees organic revenue growing between 3% and 4% compared to its prior target of 3%. P&G, in contrast, raised its range to between 3% and 5% following its 7% spike to start the year.

Kimberly-Clark also sees profits rising a bit faster than originally predicted thanks to the higher sales growth and falling commodity costs. The good news is that these updated forecasts show gathering momentum in the business. On the other hand, they imply modest market share losses that won't be easy to end without resorting to more aggressive price cuts over the next few quarters.