Please ensure Javascript is enabled for purposes of website accessibility
Free Article Join Over 1 Million Premium Members And Get More In-Depth Stock Guidance and Research
By Mark Prvulovic - Oct 25, 2019 at 6:00AM

New breast cancer trial results could prove to be a major catalyst for the stock.

Pharmaceutical giant Novartis ( NVS -0.91% ) has seen a strong performance so far in 2019. While the company has been outperformed by rivals like Amgen, Novartis has edged out over other competitors such as Johnson & Johnson.

However, some investors have started to worry that the company has been losing share in historically significant markets for the business. Specifically, Novartis has been a leader in the development of leukemia treatments, but its signature leukemia drug is losing market share at a significant rate. Coupled that with some recent scandals involving data manipulation on its newer, upcoming therapies, and it's not surprising that some investors are worried.

On the other hand, the company's top-performing drug in terms of sales revenue, Cosentyx, has been seeing drastic quarterly growth. Now that the company has announced positive results in a breast cancer trial, this could be the beginning of a significant upturn in growth for Novartis. While there's a lot to consider when looking at a company of this size, let's briefly gloss over some of the pros and cons surrounding the pharmaceutical giant right now and whether the stock is a buy. 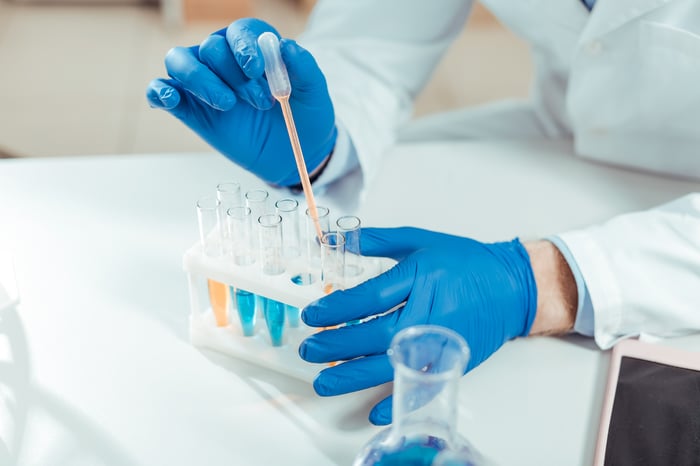 Last month, Novartis announced positive phase 3 clinical trial results for a drug candidate called Kisqali. This particular treatment is meant to be used as a mainline endocrine therapy for women with postmenopausal breast cancer that has advanced to a severe stage.

The study showed that after a 42-month period, Kisqali plus another endocrine drug, known as fulvestrant, led to a 58% survival rate among breast cancer patients, in comparison to the mere 46% survival rate for women who took fulvestrant by itself. In other words, patients who take both drugs together have a 26% improved chance of survival than if they weren't taking Novartis' new cancer drug.

Kisqali had already seen some positive results earlier this year, so investors weren't all that surprised by this recent piece of news. In early June, a trial focused exclusively on younger women with breast cancer showed that premenopausal patients who took Kisqali had a 29% improved chance of survival. Clinical studies often overlook women below the age of 59, even though they make up 20% of breast cancer patients. Considering that medications affect pre- and postmenopausal women differently, the fact that Novartis' drug seems to affect both groups equally well is highly encouraging.

Current estimates expect the global breast cancer drug market to reach $38.4 billion by 2025, which implies a 10.7% annual growth rate over the next few years. While it is a competitive market, there's definitely enough room for large-cap pharma companies like Novartis to carve out a sizable chunk of the global market share.

In another noteworthy late-September announcement, Novartis reported positive results from a 16-week 555-patient trial of its axial spondyloarthritis drug Cosentyx. The condition causes significant inflammation and arthritis in the lower back and buttocks. The company indicated that it met its primary endpoint of a minimum 40% improvement in symptoms and inflammation markers.

Cosentyx has already been approved for other conditions such as plaque psoriasis, ankylosing spondylitis, and psoriatic arthritis. Sales of Cosentyx have increased by 31% in comparison to 2018, having risen to $858 million in Q2 2019 and could easily surge even further should it receive additional regulatory approval for axial spondyloarthritis.

Looking at its other drugs

Novartis has a number of other drug therapies that have been doing very well. In early September, results from a study of Entresto to improve heart structure and function in patients with cardiovascular disease showed some promising signs despite barely missing a primary endpoint. Revenue for the drug has gone up by 81% in the last quarter to $421 million, with much of this increase stemming from increased hospital and ambulatory usage.

However, there are some drugs that have been tapering off. Novartis' Gleevec, a key leukemia and blood cancer treatment, has been losing market share at a significant rate. With its patent protection expiring, sales of Gleevec have been tumbling over the past few years while other types of rival blood cancer drugs continue to receive approval from the Food and Drug Administration. In the second quarter, sales of Gleevec declined by 19% to $323 million.

Still, most of Novartis' top 20 drug products have been showing signs of growth. Cosentyx, the company's top drug in terms of revenue, has seen impressive growth, while its second-largest drug, Gilenya, has declined by just 2%. You can see a comparison of nine of Novartis' top-selling drugs and their change in quarterly revenue in comparison to Q1 2019.

What about its data manipulation scandal?

It's worth taking a moment to address this issue, even though there's good reason to think the entire situation is overblown. In August, news broke that Novartis scientists had been falsifying data in the FDA application for Zolgensma, which carries a costly price tag of $2.1 million per treatment.

However, the false submission happened prior to Novartis' acquisition of Avexis, the company that had initially invented and filed paperwork for Zolgensma. The problem is that Novartis knew about the manipulated data but had abstained from telling the FDA until the problem became public.

In response, Novartis stated it was planning to complete an internal investigation before revealing the details to the FDA. While the company will probably still end up getting a financial slap on the wrist because of this, it's unlikely that it would lead to Zolgensma getting taken off the market.

The majority of the company's drug therapies are seeing solid growth. Even taking into consideration the markets where Novartis is losing market share, these declines are overshadowed by growth in other areas.

Overall, prospects seem good for Novartis. Now that the company's breast cancer drug has received another piece of stellar news, it wouldn't be surprising to see revenue continue to grow at an impressive rate. If you're considering buying into the company, this is definitely an opportune time to do so.