Portola Pharmaceuticals (NASDAQ:PTLA) might be relatively unheard of compared to its more popular peers. However, the $2.1 billion biotech stock has some promising drug candidates in the pipeline, with at least one poised to become a major blockbuster. Over the past couple of years, Portola launched two major drug therapies that were highly anticipated by investors and analysts alike. The first, Bevyxxa, ended up being a disappointment, while the second, Andexxa, has had a bit of a slow start in 2019 from a production standpoint.

However, with Portola Pharmaceuticals reporting strong financial results in its recent quarterly statement, the case for this biotech stock might be stronger now than it has been in years. 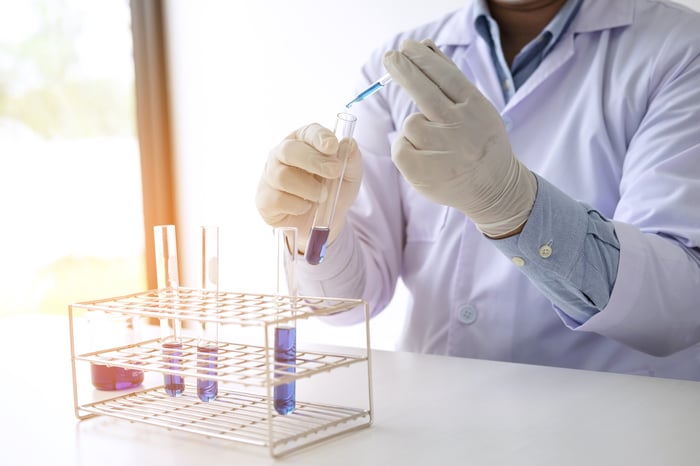 A potential breakthrough in Andexxa?

Andexxa is Portola's top drug candidate at the moment. Meant to act as a reversal agent for patients taking anticoagulants -- specifically Rivaroxaban and Apixaban -- Andexxa could prove to be a lifesaver for patients who suffer side effects of excessive, uncontrollable bleeding caused by the aforementioned drugs. With Andexxa being the only reversal agent of its kind, it's easy to see why some investors consider the drug to be the home run that Portola's been looking for.

The newer generation of blood thinners, Johnson & Johnson's Rivaroxaban and Pfizer's Apixaban, are safer and more effective than the older generation of anticoagulants. However, while patients who take these drugs have a reduced risk of suffering a stroke or blood clot, they are at risk of suffering from uncontrollable bleeding. In 2017, there were 140,000 hospital admissions due to excessive bleeding from patients on these anticoagulants, a figure that has risen from the previous year's 117,000.

Due to the lack of treatment options, Andexxa quickly received a prestigious Breakthrough Therapy designation from the U.S. Food and Drug Administration (FDA) back in 2018. Since then, Andexxa received official approval from the FDA as well as the European Medicines Agency. Considering that the therapy costs $27,500 per dose, this would put the American market for Andexxa in the $3.85 billion range if not higher. Coupled with recent studies that have shown a significant improvement in patients with intracranial hemorrhages (a historically difficult medical issue to treat), Andexxa could end up as the sole drug in this niche market.

That doesn't mean there aren't some concerns about Andexxa's potential adoption. The main worry comes down to its cost. While the average hospital visit for a patient with anticoagulant-induced bleeding ends up costing around $100,000, Andexxa is still an extremely expensive treatment that could prove difficult to justify from a financial perspective.

Considering that a reasonably cost-effective ICER in developed countries is closer to $23,000/QALY, Andexxa's use in intracranial hemorrhages, in particular, remains incredibly expensive. At the same time, patients with this bleeding often have severe reductions in quality of life following even a successful treatment. This has led some voices in the medical community, whether that be healthcare practitioners or insurance companies, to question whether it's worth it to adopt such an expensive treatment for a healthcare institution for a patient that might not live that long following the treatment in the first place.

Regardless, even if the cost ends up discouraging some degree of Andexxa use in intracranial hemorrhages, its not particularly more expensive in treating those cases with gastrointestinal bleeding. Paying $40,000/QALY for a treatment that has no alternatives isn't as financially daunting as having to pay $210,000/QALY for a treatment. Even in a worst-case scenario, Andexxa will likely see at least some degree of adoption in the healthcare community in treating patients just with grastrointestinal bleeding.

According to Portola's second-quarter financial figures, revenue for the quarter came in at $28.4 million, with $27.1 million of that stemming from Andexxa sales. This is a 608% increase from the $4 million reported back in Q2 2018. However, the company is still operating at a net loss. Portola saw a $66.2 million net loss for the quarter, which is still an impressive 37.7% improvement from the $106.2 million seen in Q2 2018.

While operating at a loss is common for biotech stocks still in the relatively early stages of a drug's lifecycle, the most important thing for Portola is whether it has enough cash reserves to last for at least 12 months. This is especially true since sales of Andexxa appear to be increasing significantly and will likely eclipse operating expenses in the coming years.

In this regard, total cash and cash equivalents came in at $273.9 million for the quarter, which would give Portola just over 12 months of financial breathing room assuming expenses and revenue stay the same. However, considering that expenses have been steadily decreasing while revenue is going up, it wouldn't be surprising to see this cash reserve last the company much longer than a year.

One area of concern worth mentioning, however, comes from Portola's second drug, Bevyxxa. While the therapy received FDA approval back in 2018, it ended up failing to drum up much interest at all. In Q2 2019, Bevyxxa generated only $74,000 in sales in comparison to Andexxa's $27.1 million. While the drug has some use as a treatment for blood clots, it ended up failing to distinguish itself in a market with plenty of existing competition. While Bevyxxa is undoubtedly a swing and a miss, a company like Portola needs to hit only a single home run with a blockbuster drug to become a success. Andexxa, as the only anticoagulant reversing drug on the market, shows much more potential in this regard then Bevyxxa.

Why Portola is a buy right now

Portola is in a strong position right now. Its financial figures are healthy, with declining expenses and a potential blockbuster drug that has revenues expected to multiply over the next few years. The stock is currently trading at a price-to-sales (P/S) ratio of 24.1, a reasonable figure considering how much growth potential Andexxa holds over the upcoming years.

Looking at other biotech stocks of a similar nature, it's hard to make a direct comparison since no other company offers an anticoagulant reversing drug. In the general blood disorder/hematology space, the comparatively-sized Global Blood Therapeutics has a similar market cap and stock price, but has no sales whatsoever. Broadening the horizon a little, Editas Medicines in the gene-editing space is trading at 39.9 times P/S, while CRISPR Therapeutics is trading at a whopping 1,536.5 P/S ratio. Both of these companies are developing blood-disorder related treatments of their own, although not in competition to Portola's own drugs.

With Andexxa poised to see significant growth over the next 12 to 24 months, now's a good time to buy shares of Portola Pharmaceuticals with a long-term focus. Investors looking for a high-growth, small-cap biotech stock would do well making Portola a core holding in a more speculative portfolio.