In what appears to be a pattern of earnings disappointments, investors sold off IBM (NYSE:IBM) stock after the company reported its third-quarter earnings. In the quarter, it actually beat estimates for earnings per share, but missed analysts' revenue estimates by a sizable $190 million. Most analysts downgraded their price targets for Big Blue upon its financial release, though virtually all analysts still have price targets higher than the current stock price.

However, does that mean investors should take advantage of the pessimism? There's a good argument to be made for IBM shares at these levels, given that there were actually some significant positives in the report. Here are three good reasons for investors to look at the newly discounted IBM stock today. 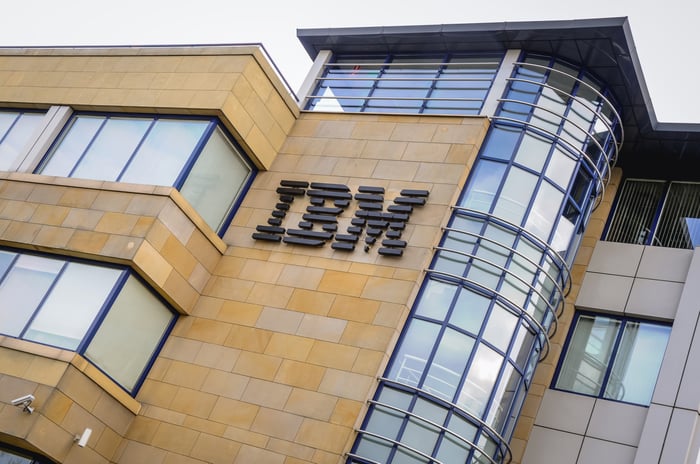 IBM was only able to record some $371 million in revenue during the quarter for newly acquired Red Hat, as the acquisition closed in July of this year. Nevertheless, as a stand-alone unit, Red Hat saw its revenue growth accelerate from around 14% in its August 2018 quarter to 19% in the recent quarter under IBM and 20% growth on a constant currency basis.

Much of the rationale for the Red Hat acquisition was IBM's potential to cross-sell Red Hat's solutions to IBM's customers, where the addressable market is huge, especially internationally, where Red Hat had little prior presence. Increasing adoption of Red Hat is a great sign, as is the fact that it hired an additional 1,000 people in just the past few months to support this accelerating demand. That's quite a welcome change for IBM, which has mostly been laying people off over the past few years due to portfolio shifts and streamlining efforts amid stagnating revenue.

A new mainframe cycle is starting

In addition to Red Hat's potential, another growth driver -- at least in the short term -- is the launch of IBM's new mainframe, the z15, which just began selling in the last week of September. IBM's systems segment was down 14% in the third quarter, reflecting the last quarter of the z14 cycle, which is winding down. IBM's mainframe cycle is very cyclical and lumpy, but at the height of the cycle, it can generate significant revenue and profits.

Management says that in its early days, the new Z mainframe is selling in line with expectations and that it expects a normal mainframe cycle for the company, which usually lasts about two years. Though the mainframe resides in the smallest IBM segment under systems sales, that segment does have the potential to add almost $1 billion in profits in its most profitable quarters, such as the fourth quarter of 2017. That's compared with about breakeven in the recent quarter, when the z14 cycle was ending.

IBM also made good progress on its balance sheet, paying off $6.7 billion of its debt in just the past quarter. Its leverage had ballooned to a whopping $72 billion just prior to the Red Hat close ($48 billion excluding financing debt), but IBM brought that principal down to just $66 billion by the end of Q3.

IBM didn't produce that much cash flow in the quarter, though -- it only made $1.8 billion. However, IBM had enough excess cash from prior quarters to prepare for the July closing of Red Hat and begin the deleveraging process. The company has also suspended its buyback program in order to bring down its leverage going forward, and the third quarter was a great start toward delivering on that promise to de-risk the company.

I can't say that IBM is going to break out to new highs anytime soon, but the stock sure looks cheap after its recent sell-off. IBM has forecast around $12 billion of free cash flow this year and at least $12.80 in operating EPS. After the post-earnings sell-off, shares are trading around 10.4 times operating EPS and about 9.8 times cash flow. The company's dividend yield is also now approaching 5%.

Though there are definitely some soft spots in IBM's portfolio, such as its technology consulting business, those soft patches could improve with time and effort. Meanwhile, the impact of Red Hat, the new z15 mainframe cycle kicking off, and the deleveraging of the balance sheet should make IBM a solid value stock at these low levels.