Please ensure Javascript is enabled for purposes of website accessibility
Log In Help Join The Motley Fool
Free Article Join Over 1 Million Premium Members And Get More In-Depth Stock Guidance and Research
By Evan Niu, CFA - Oct 26, 2019 at 10:00AM

The social networking giant wants you to trust it for information -- except in political ads.

Facebook (META 0.22%) has been working on a News tab that will provide premium news content from prominent outlets. The move is designed to address long-standing criticisms around Facebook's role in enabling the spread of disinformation, which has broad societal consequences that impact politics, healthcare, and mental health, among others. Facebook will pay some (but not all) publishers in order to license content that would be featured in the News tab, according to a recent report from The Wall Street Journal.

The social networking juggernaut has just started rolling out the new section at the worst possible time. 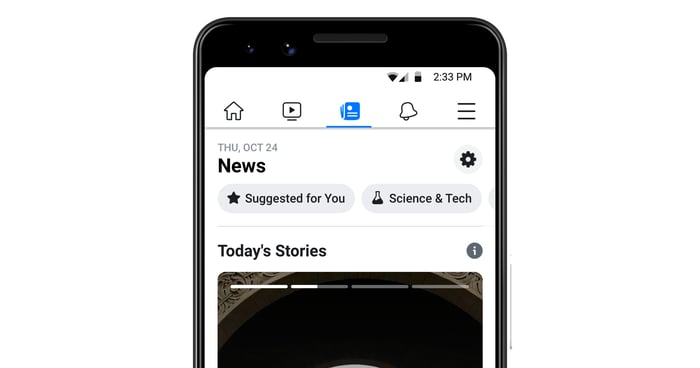 Facebook announced yesterday that it has started to test Facebook News in the U.S., featuring a content across four main categories: general, topical, diverse, and local news. In a blog post, Facebook's news chief, Campbell Brown, said the company solicited input from publishers and journalists to help identify important features that the News tab should have, including daily news, personalization, and paid subscriptions.

In a rare acknowledgment of the almighty algorithm's limitations, Brown noted that Facebook News will include human editors that curate content, although robots will still pick the "majority" of the featured stories. The curation team will favor original reporting, factual information, diverse voices, and timeliness, among other criteria that Facebook is sharing publicly.

"Regarding personalization, publishers worry that machine learning has limits and they're right," she wrote. "We have progress to make before we can rely on technology alone to provide a quality news destination."

For a publisher to be included, the outlet needs to follow Facebook's Publisher Guidelines, which factor in "integrity signals" to determine eligibility. Facebook says it will penalize outlets that spread misinformation, violate policies around hate speech, or rely heavily on clickbait and engagement bait.

Facebook's News Feed algorithms have historically emphasized engagement, and sensational content often drives more engagement, which is partially why misinformation spreads so easily on the platform.

Facts matter -- except in political ads

The news comes just days after Congress grilled CEO Mark Zuckerberg over the company's policy that it does not fact-check political ads. His Zuckness was on Capitol Hill last week to testify about Libra, Facebook's proposed cryptocurrency, but as politicians are wont to do, they confronted him on other topics.

The U.S. is gearing up for the 2020 election, and Facebook has been under fire for its recent decision to exempt political ads from its fact-checking program, which leverages third-party fact-checkers to flag misinformation and reduce its spread.

"We don't believe, however, that it's an appropriate role for us to referee political debates and prevent a politician's speech from reaching its audience and being subject to public debate and scrutiny," policy exec Nick Clegg said last month. "That's why Facebook exempts politicians from our third-party fact-checking program." Facebook's stance is that political speech is "arguably the most scrutinized speech there is," therefore fact-checking is not necessary.

Yet Brown underscores the importance of accurate information to a functioning democracy:

Journalism plays a critical role in our democracy. When news is deeply reported and well-sourced it gives people information they can rely on. When it's not, we lose an essential tool for making good decisions.

It's becoming increasingly difficult to reconcile Facebook's contradictory policies around misinformation, and the launch of Facebook News couldn't come at a worse time.