Please ensure Javascript is enabled for purposes of website accessibility
Log In Help Join The Motley Fool
Free Article Join Over 1 Million Premium Members And Get More In-Depth Stock Guidance and Research
By Daniel B. Kline - Oct 26, 2019 at 3:14PM

The satellite radio company has been growing, but there are some storm clouds gathering.

The leading horse-drawn buggy makers probably got a little nervous when they first saw a car. But perhaps they thought driving would be a fad or that infrastructure to support vehicles might remain limited.

That, of course, did not happen, and buggies are a niche industry -- if that. It's a model that has repeated itself in countless industries, and it's something that could affect Sirius XM Holdings (SIRI -1.16%) (LSXMB 0.98%) (LSXMK -1.60%).

When it first became available, the satellite radio company filled a niche. It offered people in cars better programming than local radio -- along with talk shows, music without commercials, and out-of-town sports. That was once something people wanted and had few other options to get. But podcasts, streaming music services, and unlimited-data plans may make satellite radio a luxury more people pass on. 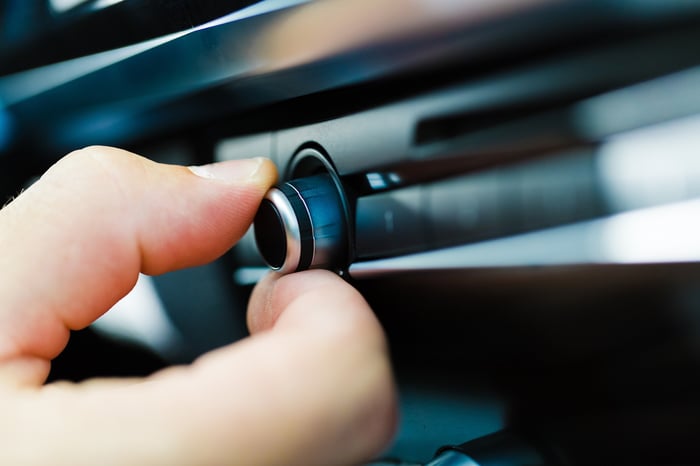 Satellite radio soon may no longer have a need to fill. Image source: Getty Images.

Where does Sirius XM stand now?

Sirius, which also owns the Pandora music service, has been growing. Revenue was up 38% in the second quarter for the whole company, or 9% if you don't factor in the new acquisition. Net income dropped a bit from $293 million to $262 million, and subscriptions grew by 170,000 to 34.3 million.

The company, which also bought back nearly $900 million in shares in Q2, reported record EBITDA of $618 million, up 22%. CEO Jim Meyer focused on this in the first part of his remarks in the Q2 earnings call.

For the next few quarters, maybe even the next few years, Meyer has nothing to worry about. His later remark on the call, however, may touch on the company's eventual undoing.

"We continue to offer outstanding new programming across comedy, sports, talk, and music, with some of the best brands in all of media," he said. "Lady Gaga played a once-in-a-lifetime show for Sirius XM subscribers and Pandora listeners in late June at Harlem's Apollo Theater, marking the first-ever combined Sirius XM and Pandora event."

Meyer then went on to list a number of other exclusives, including a comedy channel with Netflix; one with SoulCycle; another with the band Phish; and limited-time channels with Madonna, Cher, the Dave Matthews Band, and the music of Pavarotti. "And, last week, we were thrilled to announce a groundbreaking and unprecedented collaboration with platinum-selling recording artist Drake -- our content is a true competitive advantage," he added.

That's where Meyer may be wrong, and where Sirius XM may fade into irrelevance. Madonna fans might enjoy a curated channel, but they can also jump on any all-you-can-stream music service and play the singer's work -- either all of it, or their own playlist.

Sirius XM does have sports rights that allow fans to listen to their favorite teams if they happen to be out of the home market. It also has Howard Stern, though he may retire at the end of his current three-year deal.

The problem for Sirius XM is that the niche it fills may be disappearing. When the service was launched (originally as two separate companies), podcasts barely existed, and unlimited music streaming and unlimited data plans were not common.

Now that many consumers have unlimited data and access to all the music and podcasts they want, satellite radio seems much less necessary. Sirius XM has some top-tier programming, and Stern fans aren't going to drop the service anytime soon. But aside from that audience, which likely will leave when Stern retires, and out-of-market sports fans, the satellite company has no natural audience.

With consumers dividing their discretionary spending among so many different streaming services, it's very possible that many will see Sirius XM as a luxury they can give up. It's hard to justify paying for satellite radio when so many other choices are free or part of another service you already pay for.

Sirius XM has become a bit of a dinosaur. It's doing well now, but its future looks fairly bleak. The company may continue to grow for a while because of its deals with car companies, but eventually this will be a "cord" people will realize they can cut.