More than seven years ago, Nordstrom (NYSE:JWN) announced that it had found a site for a flagship store in midtown Manhattan: its first full-line location in New York City. It took a long time to go from concept to reality -- the new store is at the base of a brand-new skyscraper -- but the Manhattan flagship finally opened to the public on Thursday. (A smaller stand-alone men's store opened across the street 18 months ago.)

The flagship store opening comes at a pivotal time for Nordstrom. Sales trends have slowed dramatically over the past year, adding to the existing pressure on the company's profitability. However, Nordstrom could return to strong profit and cash flow growth beginning next year, as it capitalizes on an improved full-line store footprint.

Nordstrom's Manhattan flagship could be a big deal

Over the past seven or more years, Nordstrom has invested more than $500 million to make its new flagship store a reality. That's a huge sum relative to the company's market cap, but management expects the investment to pay off in a big way over time, with the store's location near Columbus Circle enabling Nordstrom to tap into a healthy mix of local West Side residents, commuters, and tourists.

The Manhattan retail market is ultracompetitive, and Nordstrom knows it needs unique features to stand out. It's putting a lot of emphasis on products from emerging designers and exclusive, limited-time collaborations with popular brands. Nordstrom is also betting big on beauty in its new flagship store, including technological enhancements such as augmented reality to virtually "try on" lipstick and other makeup. The store also offers a wide variety of beauty services, such as facials, manicures, blowouts, eyebrow shaping and threading, and even Botox treatments. 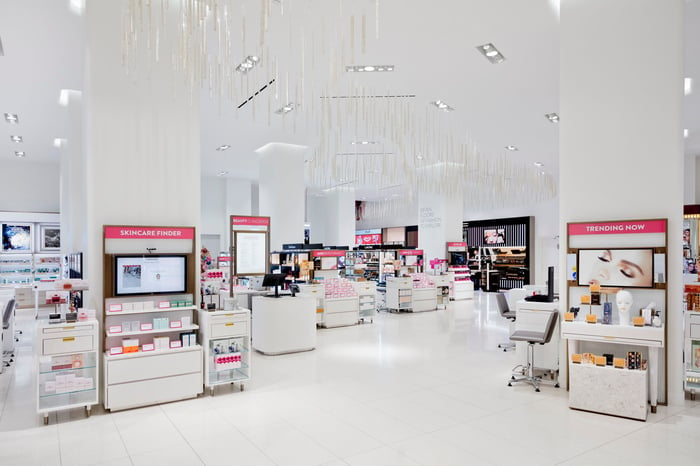 Nordstrom is also upping its game with respect to services. To give just a few examples, the Manhattan flagship store will have an on-site cobbler for shoe and handbag repairs, in addition to the tailors found at all Nordstrom full-line stores. A small portion of the store will be open 24/7 for online order pickups. Additionally, same-day delivery is available 24/7 (for eligible addresses) for a fee.

Finally, in a nod to the growing consumer preference for spending on experiences rather than goods, the Nordstrom flagship will have seven dining options. The dining lineup includes several full-service restaurants from prominent Seattle-based chefs.

A new local market strategy to support the new store

While the new Manhattan flagship should be a compelling shopping destination in its own right, Nordstrom's strategy for success in New York City extends beyond opening just one store. Last month, the company opened two Nordstrom Local service hubs in Manhattan. The company has also upgraded its supply-chain capabilities in the New York City market, so customers can get whatever they want, whenever and wherever they want it -- whether that be a full-line store, a Nordstrom Local, or at a home or office. 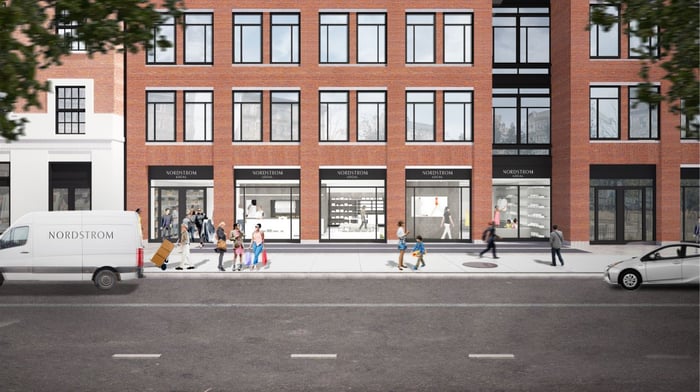 Nordstrom has already rolled out this "local market" strategy in Los Angeles, its biggest market, with great success. A unified approach to inventory within a market boosts online sales through higher conversion rates. The presence of convenient Nordstrom Local service hubs offering merchandise pickups, returns, alterations, stylist appointments, and more drives customer engagement and improves inventory efficiency. And with most inventory available on the same day or the next day, Nordstrom can provide the instant gratification that customers want.

In fact, Nordstrom is so confident in the local-market strategy that the company will roll it out in each of Nordstrom's top 10 markets -- which together account for 60% of its sales -- by the end of 2020. In New York specifically, Nordstrom thinks the flagship opening and introduction of the local-market strategy could boost annual full-line sales to more than $700 million over the next couple of years.

A key catalyst for sales, earnings, and cash flow growth

A year ago, Nordstrom seemed to have adapted well to changing retail trends, posting 2.4% comparable-sales growth for the first three quarters of fiscal 2018. However, sales fell 4.3% in the first half of fiscal 2019, due to a combination of tough market conditions and operational missteps.

Despite this sales slowdown, profitability has held up surprisingly well this year, particularly in the second quarter. Nordstrom's recent cost improvements could enable a surge in earnings when sales trends improve. The Manhattan flagship opening should drive this return to sales growth, particularly because Nordstrom will face easy year-over-year comparisons for the next few quarters.

Another reason that the flagship opening will drive meaningful earnings and cash flow growth is that Nordstrom has incurred substantial pre-opening costs in recent years, including an estimated $35 million in fiscal 2019. (That's aside from its heavy capital expenditures in the store.)

Nordstrom's moves to close seven underperforming stores this year -- including four just since August -- will also boost its profit margin and cash flow, mainly by improving inventory efficiency. With a more sustainable base of full-line stores that offer top-notch experiences and can drive high customer traffic, Nordstrom is positioned to post strong earnings and cash flow growth over the next couple of years, smashing Wall Street's expectations.