Please ensure Javascript is enabled for purposes of website accessibility
Log In Help Join The Motley Fool
Free Article Join Over 1 Million Premium Members And Get More In-Depth Stock Guidance and Research
By Lee Samaha - Oct 26, 2019 at 6:07AM

This under-the-radar industrial company has been quietly improving the quality of its earnings, and income-seeking investors should warm to it.

Industrial company Dover (DOV -1.97%) doesn't own the most exciting collection of businesses, and management's aspirations for GDP-plus-type growth isn't going to turn on growth investors, but for dividend-seeking investors, its 63-year history of raising dividends cannot be ignored. Moreover, management has taken the scalpel to the business in recent years and put it in a position to carry on growing its dividend in the future. Sporting a current dividend yield of around 2%, Dover is pretty good option for investors looking for income in their retirement. Here's why.

Dover's story in the last five years has been one of releasing the value in the stock through a combination of reducing cyclical risk and making operational improvements that have rendered the company's dividend more sustainable. 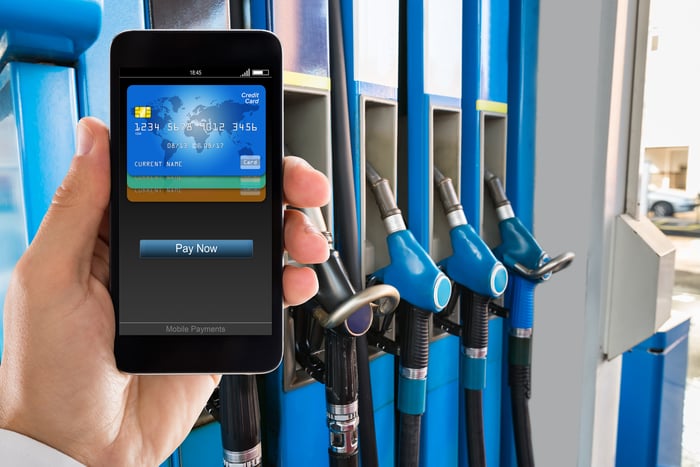 Starting with the first point, the 2014 spin-off of mobile-phone microphone company Knowles Corporation (KN -4.81%) in 2014 helped to reduce exposure to the consumer electronics market; the spin-off of its upstream oil and gas business into a new company, Apergy Corporation (APY), did the same thing with the energy market. What's left is a collection of fluid control, refrigeration/food equipment, and engineered systems businesses.

Of course, there's nothing wrong with investing in oil and gas and consumer electronics, but the vagaries of smartphone demand and energy prices imply volatility in earnings and cash flow -- which is fine for a certain type of investor, but if you are looking for a company likely to steadily grow earnings and dividend over the long term, it might not fit the bill.

As you can see below, organic revenue growth has been a lot less volatile in the last couple of years as a result of the spin-offs, with management recently affirming full-year 2019 organic revenue growth guidance of 3% to 5%. Meanwhile, on the investor day presentation in September management outlined its view that GDP-plus-type growth would continue in the future. In other words, if the industrial economy is growing, you can expect a bit more growth from Dover's mix of industrial businesses. 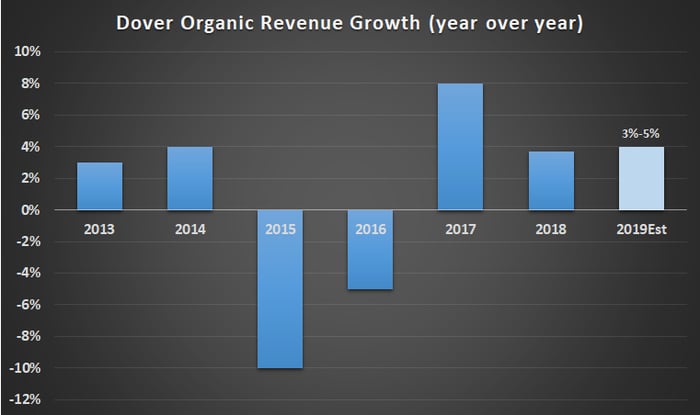 The spin-offs have also created a company with more stable revenue and cash flows because Dover now generates 30% of its revenue from recurring sources and a further 26% from components -- which tend to have repeatable demand. Moreover, key end market exposure to relatively defensive sectors such as retail fueling, food retail, automotive aftermarket, and waste management mean Dover will now have more resilience in a downturn than before. 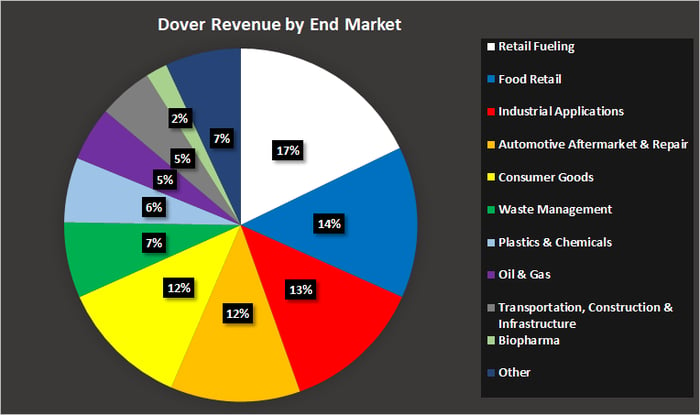 Data source: Dover presentations. Based on 2019 estimates. Chart by author

If Dover is going to grow its dividend over time, it's going to need to grow its free cash flow (FCF), too -- something that might prove difficult if management keeps spinning off businesses and losing the FCF generated by those businesses.

However, Dover's dividend is very well covered by FCF and that its FCF generation is improving even after the spin-offs. In fact, management expects to convert 8% to 12% of its revenue into FCF in 2019 and generate around 10% of FCF from revenue in the future.

Given that revenue growth is likely to be more stable in the future and the dividend is well covered, it looks likely that Dover can increase its returns to shareholders via buybacks and dividend increases in the future. 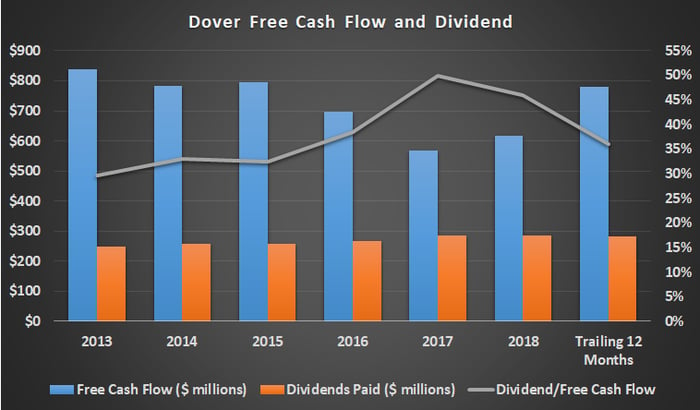 The investment case for Dover in the last few years hasn't really about topline growth, it's more about profit improvement through cutting expenses and downsizing its retail refrigeration operations in response to weaker-than-expected end demand, while investing plant expansions and automation to improve productivity.

The initial action (taken over 2018 and 2019) was to cut selling, general, and administrative costs by $130 million and then use $30 million to invest for growth such as by automating a plant in Virginia and expanding plants in Texas and Minnesota -- the good news is the cost savings are in place and the investments discussed above are set for completion by mid-2020.

In addition, management plans to take a further $50 million in net cost out in 2020. As you can see below, the cost savings have led to a strong increase in operating margin, even as gross margin has declined a bit. 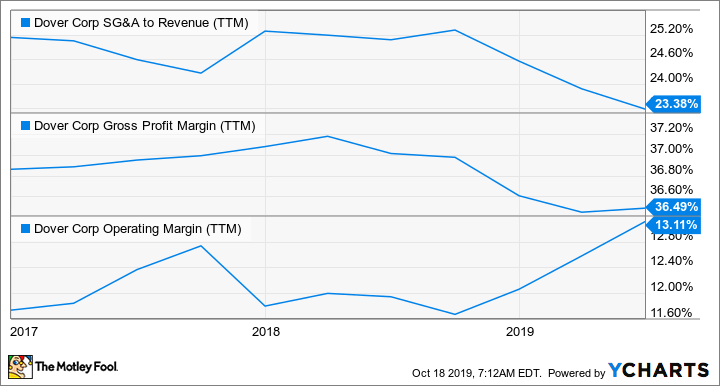 Dover's dividend looks safe and has room to grow

On a forward P/E of 16.2 times estimated earnings, Dover looks only slightly undervalued for a company with limited top-line growth prospects. But if you are looking for a solid company capable of growing a dividend -- the way Dover has done for the last 63 years -- then the stock represents an attractive way to garner a useful income for years to come.