Please ensure Javascript is enabled for purposes of website accessibility
Log In Help Join The Motley Fool
Free Article Join Over 1 Million Premium Members And Get More In-Depth Stock Guidance and Research
By Lee Samaha - Oct 28, 2019 at 10:07AM

Its high dividend yield and its exposure to world of robotics may be tempting, but investors will be better served to hit the pause button than the buy button.

In many ways, ABB (ABB 0.07%) stock looks like an attractive proposition for investors. First, ABB's one of the largest robotics companies in the world, and gives you direct exposure to a long-term growth market. Second, its shares currently sport a dividend that yields in excess of 4% -- a handy feature to have while you ride out the cyclicality of the robotics/automation market. Let's take a look at what investors need to know before they make a decision about buying in.

Buy ABB for its dividend?

There's no way to get around it, if you're adding ABB to your portfolio for its dividend, then you're buying into the idea that the company will achieve its growth aspirations. This isn't a slow-growing cash cow with a well-covered dividend; in fact, it operates in some highly competitive markets including industrial automation, electrification, and robotics. In other words, it needs to innovate just to stand still against competitors like Siemens, Rockwell Automation, Honeywell and Eaton.

ABB's exposure to robotics in automotive production is hurting it in 2019. Image source: Getty Images.

ABB distributed $1.7 billion in dividends in 2018, a payout that it barely covered with the $2 billion it generated in free cash flow (FCF). But once it completes the sale of its power grids business to Hitachi for $11 billion, there will be an impact on cash flow. For reference, the units ABB categorizes as discontinued operations (a group that now includes power grids) were responsible for $572 million worth of operating cash flow in 2018, while continuing operations generated $2.35 billion.

Of course, the proceeds of the power grids sale could be used to support the dividend, and according to the company's annual report, they will be. "Following the expected completion of the sale of 80.1 percent of our Power Grids business to Hitachi in the first half of 2020, valuing the business at $11 billion, ABB intends to return 100 percent of the net cash proceeds to shareholders," it said. Further, the company said it's committed to paying a "rising, sustainable dividend."

In other words, the dividend looks safe for the next few years at least, but investors will want to see some business growth over the long term.

The key drivers for the company's earnings growth in the medium term would be:

It's an attractive proposition, but there are two reasons to be a little patient before buying in.

Two reasons why investors should wait

First, ABB clearly faces some near-term headwinds. It certainly operates in some attractive end markets such as robotics, and factory automation -- markets that are set to receive a boost with the increasing penetration of IT and the Internet of Things into the industrial environment.

However, the problem in 2019 is that the companies that have been early adopters of automation and robotics, such as automakers and machine builders, are facing slowdowns in their end markets. Consequently, ABB's order growth has been disappointing this year. Excluding the power grids business, its orders declined 1% in the third quarter, and in its robotics and discrete automation segment, they fell 16%. 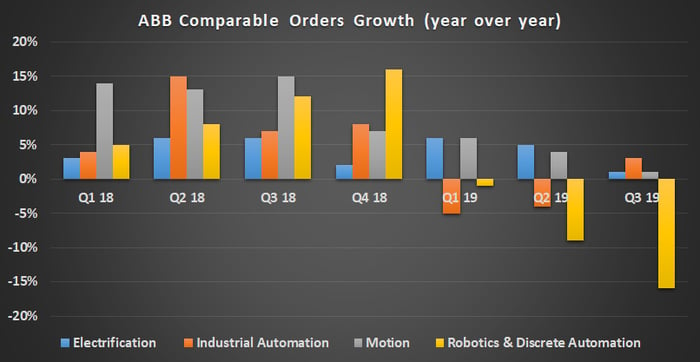 Second, the company is coming up to a key period in its transformational plan, with management expecting to have its new operating model effective, and its existing regional structures largely dismantled, according to the earnings release.

Bear in mind that this reorganization involves root-and-branch administrative changes to the business model that ABB has used for the last few decades. Specifically, ABB operated under a matrix business model whereby individuals could be reporting to multiple superiors as work was allocated to them on a project basis, as opposed to the typical pyramid structure that nearly all companies use.

There are clearly opportunities here for management to improve productivity -- ABB's profit margin lags all of its major peers. 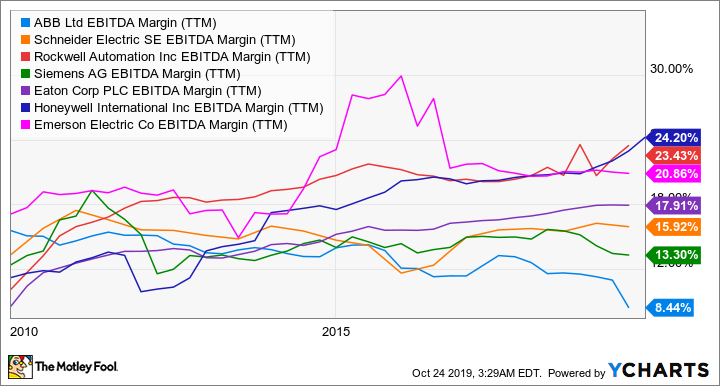 If ABB's management can merely lift its margins to the levels of its peers, and also make lasting structural improvements to the business, the bottom-line gains that would result could spur significant upward movement in the stock.

All told, ABB is an interesting investment proposition. However, because management has said that the new operational structure will be in place by the end of 2019, and warned that its end markets are in a period of cyclical weakness, it makes sense to wait until the end of the year before making a decision on the stock. At that point, after much of the heavy lifting has been done, investors will be able to see more clearly how well ABB is doing on meeting its medium-term objectives.