Please ensure Javascript is enabled for purposes of website accessibility
Log In Help Join The Motley Fool
Free Article Join Over 1 Million Premium Members And Get More In-Depth Stock Guidance and Research
By Darrell Delamaide - Oct 28, 2019 at 7:00AM

The global shift to low-sulfur fuel will increase demand for U.S. oil and tanker capacity.

In an age of 3D printing, drones and overnight delivery, transporting goods slowly by water seems antiquated. And yet shipping accounts for 90% of world trade, carrying raw materials, food and manufactured goods across oceans to make a global economy possible.

The 60,000 ships in the world's merchant fleets are among the biggest polluters on the planet, with a single large ship emitting as much sulfur dioxide as 50 million diesel cars. To mitigate that situation, the International Maritime Organisation in 2016 ordered ships to reduce the amount of sulfur in their fuel from 3.5% to 0.5% with a deadline of Jan. 1, 2020.

It is a massive shift that will ripple through the entire energy industry, affecting low-sulfur fuel refiners like Valero Energy and Marathon Petroleum but also tanker companies like Frontline and Scorpio Tankers (NYSE: STNG). Frontline is the largest oil tanker operator in the world, but focuses on crude transport while Scorpio is the largest operator of product tankers, making it a pure play for the increase in refinery products. 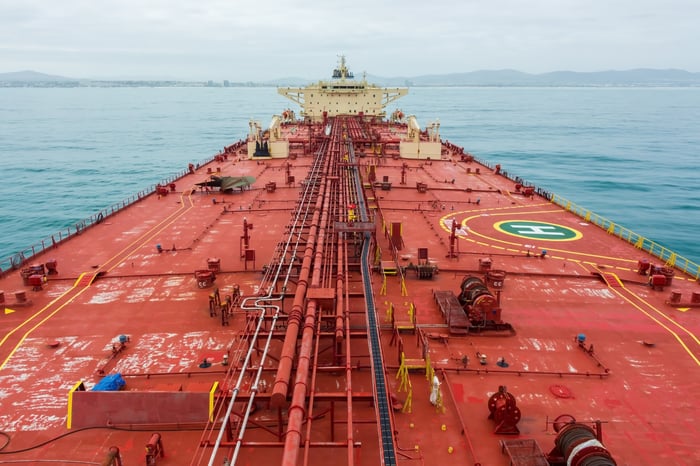 The latter is part of the Scorpio shipping group that was floated to the public in 2010. It is related to Scorpio Bulkers (NYSE: SALT) with Emanuele Lauro, scion of the Lolli-Ghetti shipping family, functioning as chief executive for both companies. has rebuilt the company, ordering new ships and making acquisitions so that the average age of the fleet is just 3.7 years. In October, Scorpio Tankers said it would be adding 19 ultra-modern tankers to its fleet through a transaction with Trafigura shipping, which would make this partner a major shareholder. (Frontline had done a similar deal with Trafigura a month earlier.)

Lauro cited IMO 2020 -- shipping jargon for the low-sulfur mandate -- as a driver of what is expected to be a significant increase of ton-mile demand over the coming months. At the same time, Scorpio Bulkers reduced its stake in Scorpio Tankers to 7.5%, with a bonus stock dividend of 0.0138 shares of the tanker company for each of its shares. Robert Bugbee, who is president of both companies, said on a conference call for Scorpio Bulkers in October that there is no reason Scorpio Tankers' stock couldn't be up 50% by the next call.

A bright spot in a gloomy industry

But you don't have to take his word for it. Of the 15 analysts with recommendations on the stock, 14 had a buy/strong buy in October. David Marcus, CEO of Evercore's global advisors unit, has been flogging the stock of the company, in which it has a 2.5% stake.

The bullish outlook for Scorpio Tankers contrasts with the bearish view on the oil industry as a whole. The Organization of Petroleum Exporting Countries, among others, is forecasting an oil glut for next year, and urging its members to keep cutting production.

What boosts the prospects for tankers is that U.S. oil, traded under the benchmark of West Texas Intermediate, is generally sweet crude -- that is, a low-sulfur crude more easily refined into gasoline and diesel. The surge in demand for low-sulfur diesel from the IMO mandate means greater amounts of U.S. oil or diesel will need to be shipped, even though declining demand in other areas will continue to dampen oil prices overall.

Scrubbers to reduce the emissions from high-sulfur diesel are an option, but only an estimated 3% of the current fleet will have scrubbers by 2020. That number will increase but most ships will have to use the cleaner fuel.

Scorpio has a double advantage. Not only will it profit from the added demand for oil transport, its own fleet is already primed for the 2020 restriction through the addition of scrubbers. The company opted last year to spend around $300 million, two-thirds of which was financed externally, to install scrubbers on the entire fleet.

This type of leverage is one of the things that makes  Scorpio a good bet. Just how long the current strength of the tanker sector will last remains to be seen. But a strong balance sheet, a relatively modern fleet, and a vested interest in operations also make the case for Scorpio as a contrarian investment in a gloomy industry.