Texas Instruments (NASDAQ:TXN) entered the quarter with the stock up more than 36% year to date, as investors were looking forward to a turnaround in the semiconductor industry. The company first warned investors about a slowdown in fall 2018, but the third-quarter earnings report released on Wednesday painted a worsening picture as we close the books on 2019.

Revenue fell 11% year over year, with core products -- analog and embedded processors -- experiencing a decline in sales. However, investors were already expecting a soft quarter. What sent the stock down after the earnings announcement was the guidance for a 15% sequential drop in revenue for the fourth quarter. That shows the business environment is worsening, not getting better. As a result, the stock fell 8% after the earnings release.

We'll review what management had to say, and how they are positioning the company for an eventual recovery. 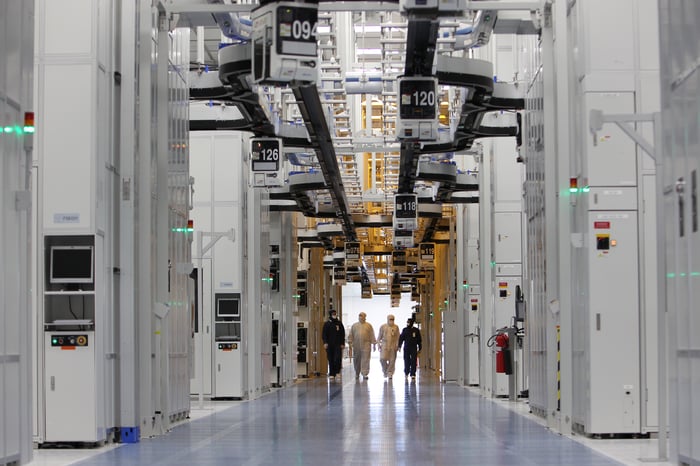 The outlook for the fourth quarter reflects weakening demand for embedded and analog processors, which make up more than 90% of TI's business. One analyst on the call pointed out that the guidance suggests demand for embedded processors is as weak as it was during the 2009 financial crisis when the financial system was in such dire straits that businesses couldn't get funding for inventory.

The semiconductor industry has been in a slowdown now for four quarters, but a recent report from the Semiconductor Industry Association (SIA) for the month of August showed the industry posting its first sequential gain in sales for the first time in nearly a year. Understandably, analysts on the third-quarter conference call were confused as to what was causing management to issue such a soft outlook, when the SIA was indicating an uptick in chip demand.

When pressed to explain the Q4 outlook, management blamed a broad-based weakness across all markets, stemming from escalating trade tensions between the U.S. and China in the last few months.

Here is how CFO Rafael Lizardi described the situation:

If you think about when there's tensions in trade and obstacles to trade, what do businesses do? They become more cautious, and they pull back. And we are at the very end of a long supply chain, and when the ones at the very front pull back, it becomes a traffic jam. And so our sense is that is what's happening in the marketplace.

On the bright side, free cash flow is holding firm, up 2% on a trailing-12-month basis reaching $6 billion. Out of that total, management has returned $7.4 billion to shareholders in dividends and share repurchases, consistent with management's long-term objective to return 100% of cash to investors.

The company is also maintaining a strong balance sheet while still investing in the business to capitalize when demand inevitably returns. Despite the drop in revenue in recent quarters, operating expense has roughly held steady at $3.2 billion over the last year. This has caused operating profit to fall faster than the top line, but these expenditures are intended to build the company's competitive moat.

Speaking to these investments, Lizardi explained their long-term focus:

All in all, management doesn't seem concerned about the slowdown. The company is generating plenty of free cash flow, the balance sheet is healthy, and they continue to plow money back into the business for long-term growth.

With negative sentiment settling in, the stock could trade lower in the short term, especially given that the shares are not by any means cheap, trading at a forward P/E of around 22 times next year's earnings estimates.

However, if the stock continues to fall, the dividend yield just gets more attractive. Currently, the forward yield is 3.03%, which already looks appealing for the bellwether chip producer.