Vertex Pharmaceuticals (NASDAQ:VRTX) made news last week when its long-anticipated cystic fibrosis treatment, Trikafta, received approval from the U.S. Food and Drug Administration (FDA). While this is good news in and of itself, investors and analysts alike were impressed by the fact that Vertex's Trikafta earned this approval only three months after the application was filed, five months sooner than anticipated.

With this new cystic fibrosis drug now only weeks away from being available in pharmacies across the country, the already bullish appraisal for the biotech stock seems to have become even more optimistic. Let's take a look at what exactly this means for Vertex as well as some considerations investors should keep in mind going forward. 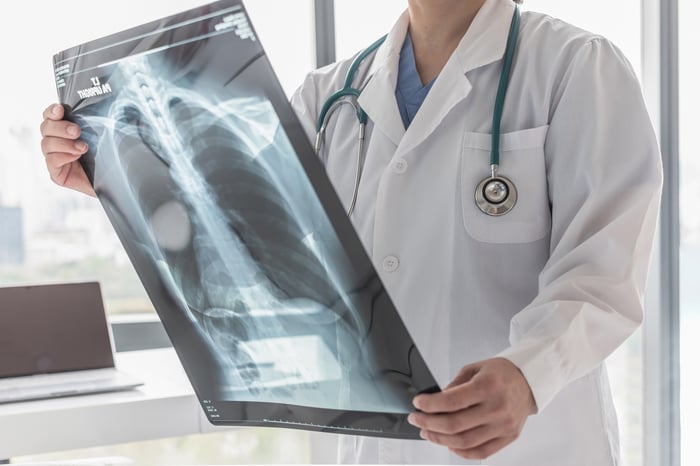 Trikafta is a triple-drug combination that targets the genetic causes of cystic fibrosis in patients. Specifically, it is designed for patients who have a particular gene mutation that leads to the symptoms of the disease. This mutation, known as F508del, is estimated to be present in around 90% of the cystic fibrosis patient population.

A rare condition that leads to a buildup of thick mucus in various parts of the body, including the digestive and respiratory systems, cystic fibrosis affects approximately 30,000 people in the U.S., with around 1,000 new diagnosed cases every year.  Eventually, the disease causes severe health problems, which include chronic infections, breathing problems, and diabetes. Although the number of patients who are diagnosed with the condition remains relatively small, the severity of their symptoms coupled with a lack of long-term treatments means that a new cystic fibrosis drug could command a significant price tag from patients.

While there have been some treatments developed by other biotech companies, most of these have managed only to treat some of the symptoms of prolonged cystic fibrosis, rather than resolving the cause. Besides general antibiotic and anti-inflammatory medications, inhalable mucus thinners (such as pulmozyme) help manage some of the more problematic respiratory symptoms. However, with there being no outright cure for the disease,the estimated market size for Trikafta could be quite large, with some research groups estimate that the overall market size for cystic fibrosis treatments to be worth $13.9 billion annually by 2025. Considering that no other company can offer a drug that could compete with Trikafta as a long-term solution for the condition, Vertex can easily gobble up the majority of this lucrative market.

Most analysts were already optimistic about Vertex, but this earlier-than-expected approval from the FDA has led many Wall Street experts to upgrade their price targets. Geoffrey Porges, an analyst at SVB Leerink, wrote that sales estimates are expected to reach $4.6 billion by 2023 and $6.6 billion by 2025. "This timing suggests to us that the revenue ramp could occur earlier, and might therefore be steeper, than we had previously forecast," he said.

The only downside of the Trikafta launch is that it will chip away at Vertex's previous drug therapies, Orkambi and Symdeko, which are older-generation drugs that have helped cystic fibrosis patients deal with their symptoms. According to Vertex's Q2 financials, Orkambi brought in $316 million in quarterly revenue, while Symdeko earned $362 million for the company.

Although earnings from these two drugs, which were the company's top-performing therapies, will decline drastically in the months to come, this decline should be more than made up in Trikafta revenues. With Vertex's current 2019 revenue guidance coming in at $3.6 billion, the $6.6 billion figure predicted by analysts would represent an 83.3% increase over a five-year period or a 12.3% annual increase in revenue.

The general consensus around Vertex was pretty positive even before this announcement. In September, the company announced it paid a hefty $950 million to acquire Semma Therapeutics and its promising type 1 diabetes treatment. This new treatment involves growing cells from stem cells that can automatically release insulin when needed. These cells would then be put into a device that's implanted in the patient's body.

In comparison to existing treatments, such as routine insulin injections, this type of technology would be revolutionary for patients and offer a much more convenient solution. The current type 1 diabetes market is expected to be worth $25.5 billion by 2024, and this new treatment could prove to be another blockbuster for Vertex in the years to come.

In the realm of cystic fibrosis treatments, Vertex doesn't have much competition at present. Novartis sold off some of its cystic fibrosis products back in 2018 for $463 million to Mylan. Since then, Mylan has received approval from UK regulators to market its own therapy, tobramycin, an inhalable antibiotic to treat chronic lung infections caused by the condition. However, it doesn't do anything to resolve the condition itself, only treating its respiratory-related symptoms.

Vertex could face future competition in the budding gene-editing sector, although major players in that area such as CRISPR Therapeutics and Editas Medicine are more focused on treating blood disorders at present than conditions like cystic fibrosis. However, the underlying gene-editing technology could quite easily be used to edit the mutated genes that result in cystic fibrosis. Back in 2016, the Cystic Fibrosis Foundation announced a three-year research agreement with Editas to develop gene-editing treatments for the condition. Since then, however, it doesn't appear that Editas has made any major breakthroughs, although the research agreement is still ongoing.

Overall, Vertex has hit a home run with its cystic fibrosis drug, and investors are right to rejoice at this news. Although there's a genuine risk that gene-editing companies could develop their own treatments in an attempt to siphon away market share away from Vertex's Trikafta, that possibility remains far in the future.