It's been a wild ride for investors in World Wrestling Entertainment (NYSE:WWE) this year. After flying from the top rope and reaching all-time high's earlier this year, WWE has been down for the count, losing nearly two-thirds of its value, putting the stock down about 7% so far this year.

The match is far from over, however, as WWE is scheduled to report the financial results of its third quarter after the market close on Thursday, Oct. 31. Let's look back at what has caused the wild swings to see if it provides any insight into what investors can expect when the company reports earnings. 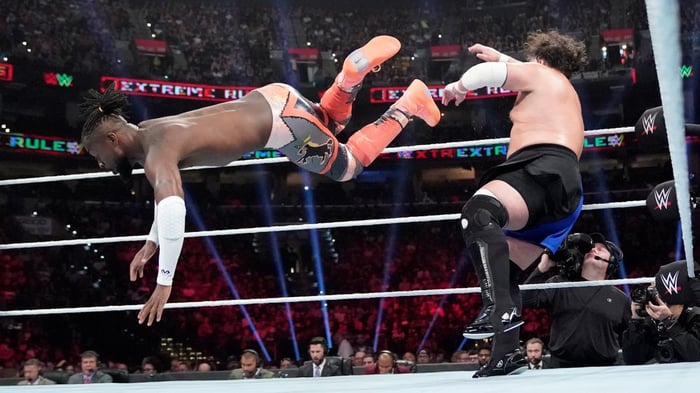 For the second quarter, WWE reported revenue of $268.9 million, a 4.5% year-over-year decline, though the company faced tough comps because of record revenue in the prior-year quarter. Adjusted operating income before depreciation and amortization (OIBDA) of $34.6 million declined by 20% compared with the prior-year quarter, though it exceeded the company's guidance.

The top line missed analysts' consensus estimates of $275 million, caused by declines in each of WWE's operating segments. The company's media segment fell to $197 million, down 3% year over year. Both live events and consumer products also declined, falling to $48.8 million and $23.1 million, a decline of 7% and 13%, respectively. Average paid subscribers for the company's streaming service also decreased, falling to 1.69 million, down about 6% year over year.

WWE has always been a cyclical business, but the timing of its recent slump couldn't be worse. In mid-2018, the company signed new, landmark network deals for its two biggest programs. Fox (NASDAQ:FOX) (NASDAQ:FOXA) acquired the rights to SmackDown Live in a deal reportedly worth $1.025 billion. Comcast's (NASDAQ:CMCSA) NBCUniversal retained the rights to Monday Night Raw in a deal valued at $265 million annually for five years.

The ink on those deals is barely dry and the networks may be wondering what they've gotten themselves into. Ratings for Raw slumped 14% year over year in the first quarter, and 11% in Q2. Likewise, ratings for SmackDown fell 13% in Q1, while sinking 7% last quarter. There was some relief in early July, as Raw and SmackDown saw ratings improve by 1% and 2%, respectively, compared with the year-ago period.

The incumbent also faces competition from new kid on the block -- All Elite Wrestling (AEW) -- backed by Jacksonville Jaguars owner Shad Khan. The groups cable TV show has been creating buzz and recent reports indicate that some WWE headliners are considering defecting to AEW.

WWE only provides broad strokes when it comes to guidance, and the company said for the third quarter it expects OIBDA in a range of $17 million to $22 million, which would represent a decline of between 53% and 39% from the year-ago quarter.

For its part, Wall Street has fairly muted expectations. Analysts' consensus estimates are calling for revenue of $191.43 million, which would represent year-over-year growth of less than 2%, while expecting earnings per share of $0.02, a far cry from the $0.37 it reported in the prior-year quarter.

WWE has a lot to prove when it reports earnings on Thursday.