Investors had extremely muted expectations going into Cognex's (NASDAQ:CGNX) third-quarter financial report. The machine-vision leader made no secret that it would face challenges in 2019, not the least of which was the uncertainty resulting from the U.S. trade war with China.

Cognex delivered results that were in line with its forecast but cited "persistent global economic uncertainty and trade conflicts" as negatively affecting its results, particularly in Europe and China. 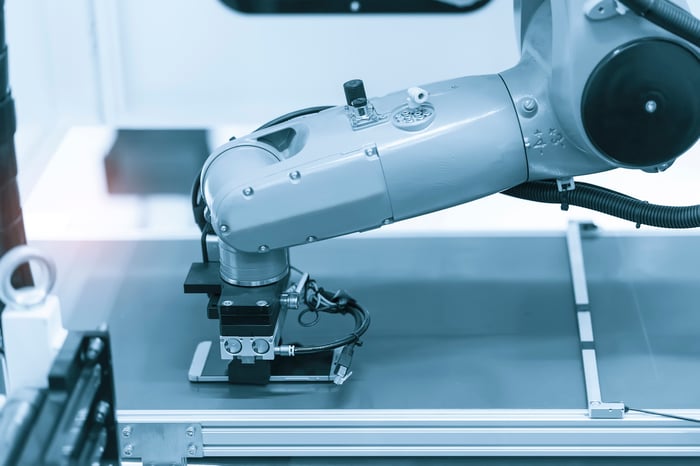 About what management expected

Cognex reported revenue of $183.33 million, down 21% year over year. While it was disappointing, it easily topped analysts' consensus estimates of $177.39 million and was still near the high end of management's forecasted range of between $175 million and $185 million.

The company did its best to control spending in light of its weaker revenue. Research, development, and engineering expenses decreased 5% year over year, while selling, general, and administrative expenses declined about 2%, though neither fell as much as revenue, seriously affecting the bottom line.

On the conference call, CEO Robert Willett pointed to the "ongoing slowdown in manufacturing investment." He also said that the "decline can be almost entirely attributed consumer electronics," which plummeted 50% year over year. Weakness in the automotive sector also continued. This is the first time both segments have contracted simultaneously, hitting Cognex with a one-two punch, as these represent the company's two largest markets and together account for about 50% of its revenue.

The area of logistics was a rare bright spot, growing 50% year over year, albeit from a smaller base. Willett said the company is well positioned to continue to "grow at that 50% rate over the long term." He noted that many traditional brick-and-mortar retailers are beginning to invest heavily in logistics and automation to compete more effectively with their e-commerce rivals.

A word on the acquisition

On Oct. 16, Cognex acquired SUALAB for $195 million. The computer-vision software company uses the artificial-intelligence technique of deep learning to automate industrial inspection tasks, and the company expects the deal to be accretive within two years.

Both strategically and culturally, this company is a good fit for Cognex. Willett said deep learning would be a "major growth driver for Cognex in the years ahead."

How this will affect Q4

For the upcoming third quarter, Cognex management is guiding for revenue in a range of $155 million to $165 million, which would represent a decline of between 15% and 20% year over year. Willet said that's due to "a persistent deterioration of business conditions in the industrial markets the company serves, particularly in business that relates to China."

The company is also anticipating gross margins in the mid-70% range and for operating expenses to increase by the mid- to high-single digits on a sequential basis (Q3 expenses came in at $92.6 million), partially the result of the acquisition of SUALAB.

The stock was down about 4% in after-hours trading, in the wake of Cognex's financial report. Investors shouldn't be too surprised about the initial reaction, as the stock had gained nearly 40% so far this year, so the stock may have gotten a little ahead of itself.