Please ensure Javascript is enabled for purposes of website accessibility
Log In Help Join The Motley Fool
Free Article Join Over 1 Million Premium Members And Get More In-Depth Stock Guidance and Research
By Donna Fuscaldo - Oct 29, 2019 at 11:08AM

Microsoft's cloud business growth may be slowing, but it's still up double-digits -- and with new Surface products coming, there's a lot to like about the company.

Microsoft (MSFT -0.40%) may be among the few companies with a market capitalization of more than $1 trillion, but there's still a lot of growth left for the software giant. And that's even with the stock up 36% so far in 2019.

Thanks to a booming cloud business, new product offerings from its Surface unit, and subscription services that provide it with recurring revenue, there are a lot of reasons the best is yet to come for Microsoft.

Take its cloud business, which competes against Amazon's Amazon Web Services and Alphabet's Google Cloud, for starters, we see that it has been a huge driver of growth over the last few years.

While Amazon remains the first-place provider of cloud services, Microsoft is gaining traction. It has morphed itself into the No. 2 player (with estimated market share of about 18% to Amazon's nearly 32%), enjoying double-digit growth quarter after quarter. In its recently reported fiscal first quarter, its Azure cloud revenue grew 59% year over year. That growth is impressive even if it's lower than the 76% increase it saw in revenue in the year-ago quarter.

To maintain healthy growth, even if it's not as red-hot as last year, Microsoft is focusing a lot of its attention and investment dollars on expanding the uses and partners for its cloud services. For instance, it recently began bundling Azure with its suite of Office software. Microsoft is also inking deals with other technology powerhouses, such as Oracle and SAP, to offer cloud services.

To differentiate its offerings and ride a new trend, Microsoft is providing customers with hybrid cloud services, which means sensitive data is housed on-site with the client while everything else resides on Microsoft's cloud. That appeals to companies that don't want to give up control of sensitive data but want to take advantage of the cost savings and efficiencies they can get from the cloud. Amazon has even taken notice, beefing up its offering in that area recently. 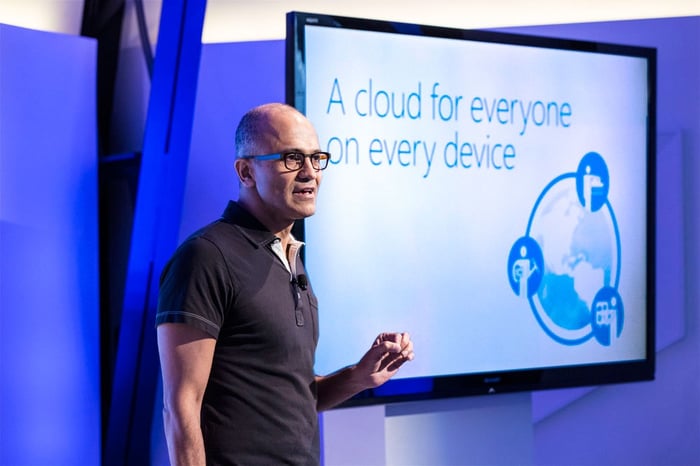 Microsoft's business, and thus its bottom line, has and will continue to benefit from its shift to a subscription model for its software. Today, many corporate customers pay a subscription fee to access Office and other software in the cloud, giving Microsoft a recurring stream of revenue that provides stability and reliability in earnings. Customers sign long-term contracts, which means Microsoft knows how much money is coming in each month for an extended period of time. Its focus on the commercial market and its recurring revenue also helps it ride out economic downturns. If and when a recession hits, Microsoft will be better insulated than some of its tech rivals. Companies will still need software in a downturn, and Microsoft will be there to provide it.

Surface foldable devices may be a big hit

Then there's Microsoft's line of Surface mobile devices that got an overhaul earlier this fall. During a recent Surface event, Microsoft launched the Surface Laptop 3, an ultra-thin laptop, two new Surface Pro tablets, and wireless earbuds. But what could be more important to its future are the Surface Neo and the Surface Duo, foldable devices that give users a completely new form factor. The Surface Neo is a foldable tablet, while the Duo is a smartphone. The latter will run Google's Android operating system, a first for Microsoft. Neither will be available until the later part of next year. If the foldable mobile phone is a hit with consumers, it could mark a big second act for Microsoft in a market where it failed in the past.

While there's no guarantee Microsoft will continue to win more cloud market share or have a hit on its hand with its new Surface products, there are still a lot of reasons to like the stock. After all, Microsoft said last week that it continues to expect double-digit revenue and operating income growth driven by the strength it's seeing in the commercial marketplace. Not too shabby.