Please ensure Javascript is enabled for purposes of website accessibility
Log In Help Join The Motley Fool
Free Article Join Over 1 Million Premium Members And Get More In-Depth Stock Guidance and Research
By Billy Duberstein - Oct 29, 2019 at 11:03AM

The steelmaker gives industrial investors a ray of hope.

While the overall economy is still expanding, the industrial and manufacturing sector is currently in its own mini-recession. Certainly, if you've invested in any sort of industrial or commodity-related company, you're feeling the pain. Many such stocks are down significantly since the beginning of summer.

While the first half of 2018 saw a surge in investment after the 2017 Tax Cuts and Jobs Act, the ongoing U.S.-China trade war, along with rising interest rates at the end of 2018, caused industrial and auto companies to pull back strongly on spending.

As is the case with many commodity industries, the steel industry has suffered from high inventories throughout the system in 2019. When end users of commodities go from holding high inventory levels to holding low, bare-bones levels, it can cause wide swings in demand and pricing for commodity producers at the front of the supply chain. 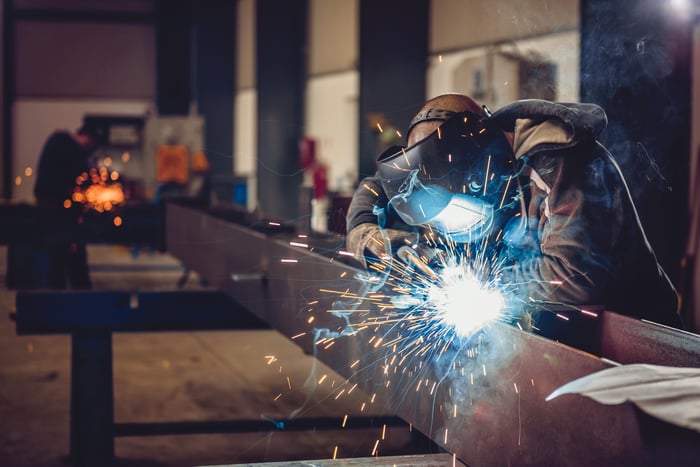 CEO John Ferriola said on the conference call with analysts that management believes steel prices have bottomed out. That would be a very welcome sign indeed. For Nucor, overall pricing declined 5% quarter over quarter and 13% year over year, with the fourth quarter set to have even lower pricing, since steel prices declined throughout the third quarter as trade tensions ratcheted up.

Even worse than the manufactured products that Nucor sells, commodity steel scrap has plummeted, with scrap prices down about 37% from highs in early 2018 of around $379 per ton to roughly $238 today. In the third quarter, Nucor said its average scrap price per ton was $299.

When pressed on the issue, Ferriola said he expects scrap prices to rebound about $20 to $25 this month, and continue higher for the rest of the year in the range of $25 to $40. That would still mean a very low steel price compared with last year, but an improvement from current levels. In particular, Ferriola sees hot-band sheet steel improving, as that has been one of the big lagging products this year.

Aside from any particular product, however, Ferriola basically sees inventories that have gone from too high throughout the industry to a historic low level. Ferriola said: "When we look at MSCI inventories, we see them -- I mean, they are incredibly low levels and the lowest that we've seen in many, many years. And compared to last year, they're down at this time -- same time last year, they're down fairly significantly."

By MSCI, Ferriola means the Metals Service Center Institute, an organization of national metals service centers. These service centers buy raw and produced metals, then alter them for end-customer specifications and sell them. Nucor COO Leon J. Topalian said MSCI inventories were down 14% to 20% from last year, and down even more when compared with the high inventory levels from 2015 and 2016.

Will demand pick up?

It's not a certainty that steel prices will rise, but the low inventory situation gives reason for optimism. Nucor actually said the nonresidential construction market, where it generates about half its revenue, had seen steady demand throughout the year, though plate and sheet steel, used in industrial and automotive applications, had softened a lot.

A few things could help spark demand in these lagging markets in 2020. First, the strike at General Motors (GM 1.34%), which began in the third quarter, just officially ended this past weekend.  That could help steel demand for the important automotive market, which has seen sales decline about 2% in 2019. Second, interest rates are now starting to come down, whereas they went up last year, which may help spur more industrial demand.

Finally, Nucor management suggested that resolving the uncertainty around the USMCA trade agreement (the successor to NAFTA) could help U.S. steel demand. The bill has a provision that 75% of U.S. automobile content be sourced from domestic manufacturers, and contains stronger enforcement on sourcing and origination of steel. Both political parties appear willing to move the bill forward, though its status is still uncertain.

While there is still considerable uncertainty in the steel industry, lower interest rates, low inventories, and the potential of the USMCA passing should put steel and steel-related stocks on the radar of value investors heading into 2020.