Please ensure Javascript is enabled for purposes of website accessibility
Log In Help Join The Motley Fool
Free Article Join Over 1 Million Premium Members And Get More In-Depth Stock Guidance and Research
By Jennifer Saibil - Oct 29, 2019 at 6:00AM

The global financial services firm made a public showing of confidence in the startup that's in dire need of a bailout. Will that shake public confidence in its own name?

Investment banking is a field for people who can handle a lot of risk. That's become apparent again in the ongoing saga of WeWork's massive losses and its so-far failed IPO.

One of the main investors in the struggling company is JPMorgan Chase (JPM -1.67%), perhaps the world's leading international investment bank. While every investment bank makes mistakes, their losses are not always as colossal as this one. The question on its own investors' minds is whether or not this will create an indelible stain, or if Jamie Dimon, CEO of the financial giant, can walk away unscathed. 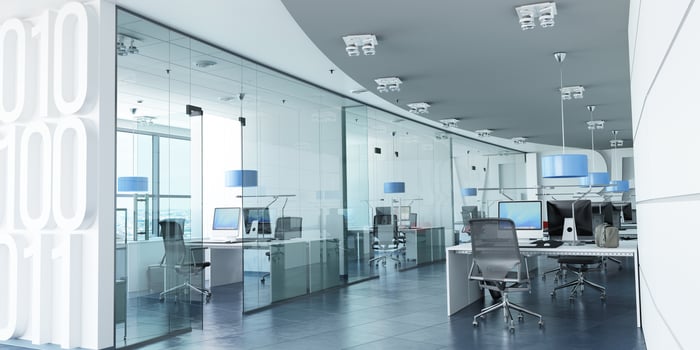 We work runs on a simple concept: shared office spaces. However, it takes that theory from zero to 60 pretty quickly. The offices are modern in design and include all amenities, but the highlight of the company's strategy is the community aspect of the settings. The spaces are laid out in a way that workers can either have privacy or work together, and collaborating is encouraged. There are also various activities offered to everyone working in a space.

Founded less than a decade ago, the company has seen incredible growth, with 528 offices in 29 countries in cities like Paris, Tel Aviv, and Moscow, and just about any other large city where an entrepreneur might be interested in setting up shop. It is also the single largest private tenant in New York City.

WeWorks's phenomenal expansion is both fueling excitement about the company as well as generating concern about its ability to produce a profit. It continues to take new, long-term leases and open up new spaces, but as revenue grows, increasing to $1.8 billion this past summer, operating losses have deteriorated to $1.7 billion.

"No adults in the room"

WeWork has been the darling of investment bank execs, including Dimon, who extended a personal $500 million credit line to the company's recently axed CEO and founder, Adam Neumann. Neumann has come under a lot of scrutiny for his eccentricity and financial deals, including owning some of the buildings where WeWork leases space and "selling" the corporate name "We" to his company to the tune of $5.9 million (which was later returned).

Another issue that's alarming is the company's corporate governance, or lack thereof. It includes dual-class shares, which gives all of the control of the company to the executives and none for public investors. The Wall Street Journal quoted real estate investor Sam Zell saying, "The governance reflects there are no adults in the room," with underwriters playing up to potential IPO favorites, ignoring disturbing warning signs, and now facing the music.

One of Jamie Dimon's main goals in courting WeWork was to catapult his company to the forefront of tech underwriting, where it is now trailing behind Goldman Sachs and Morgan Stanley.

JPMorgan Chase is WeWork's third-biggest lender  outside of the personal loans granted to Adam Neumann and its chosen securities underwriter. The company's largest backer is SoftBank, the Japanese investment firm that is funding other shaky American start-ups such as Uber and Slack. Back in January, SoftBank valued WeWork at an astronomical $47 billion, and other underwriters gave even higher valuations. But already in August, during the pre-IPO, investors weren't agreeing about the high valuation, and the IPO came crashing down.

With a dearth of cash after the unexpected failure, both Diman and SoftBank SEO, Masayoshi Son, offered WeWork bailout packages. However, JPMorgan Chase's offer showed that it was finally buckling down on the overindulged favorite, and the bankers wanted to sound out investors before committing to a rescue plan. SoftBank eventually stepped in with $1.5 billion immediately and a pledge for $5 billion more, as well as other conditions, which WeWork grabbed.

So where does that leave JPMorgan Chase? In a very good place among big bank stocks, actually.

The underwriter is outpacing its rivals, with an 8% increase in both revenue and income for the third quarter and a 12% increase in earnings per share. CFO Jennifer Piepszak said that the catastrophe was "within our risk appetite," according to the Financial Times.

While it earned the company some flak for its poor due diligence, there doesn't seem to be any sweat off its back to get right back in the game, and perhaps investors appreciate the ability to take chances and rebound. However, the saga's not over yet, so JPMorgan Chase still needs to make the right moves as this new chapter begins for WeWork.