Johnson & Johnson failed to find asbestos in its baby powder, and Apple prepares to report its fourth-quarter results.

The Dow Jones Industrial Average (^DJI 0.03%) had eked out a small gain by 1:20 p.m. EDT Wednesday, up just 0.06%. News that Chile had cancelled the summit at which the U.S. and China had planned to sign a trade deal next month has introduced more uncertainty for investors.

Helping the Dow was Johnson & Johnson (JNJ 1.75%), which saw its stock jump after third-party testing failed to confirm earlier asbestos findings in its baby powder. Shares of Apple (AAPL 0.17%) moved in the opposite direction as investors braced themselves for the tech giant's earnings report scheduled for the afternoon.

Shares of Johnson & Johnson suffered a steep decline on Oct. 18 when the company voluntarily recalled thousands of bottles of baby powder after the FDA found trace amounts of asbestos in a sample purchased online. While the scope of the recall was small, the company's reputation was at stake.

Late Tuesday afternoon, Johnson & Johnson announced that 15 new tests from the same bottle of baby powder previously found to have contained asbestos came back negative. In addition, 48 new laboratory tests of samples from the same lot of baby powder failed to find any trace of asbestos. The tests were performed by two third-party laboratories. Shares of Johnson & Johnson were up 2.7% on the good news.

"Rigorous and third-party testing confirms there is no asbestos in Johnson's Baby Powder. We stand by the safety of our product," the company stated in the press release announcing the test results.

Initially, one of the two third-party laboratories performing the new tests did find asbestos in three samples. But after an investigation, the laboratory found that the culprit was a contaminated portable air conditioning unit. When those samples were prepared in a separate room, none were found to contain asbestos.

With new testing vindicating Johnson & Johnson's baby powder, this asbestos saga appears to be over.

Apple down ahead of earnings report

Shares of Apple were down 0.5% a few hours before the company was set to report its fiscal fourth-quarter results. While the iPhone 11 began shipping on Sept. 20, right before the end of the quarter, the report should still give investors a sense of how the latest iPhone is doing. 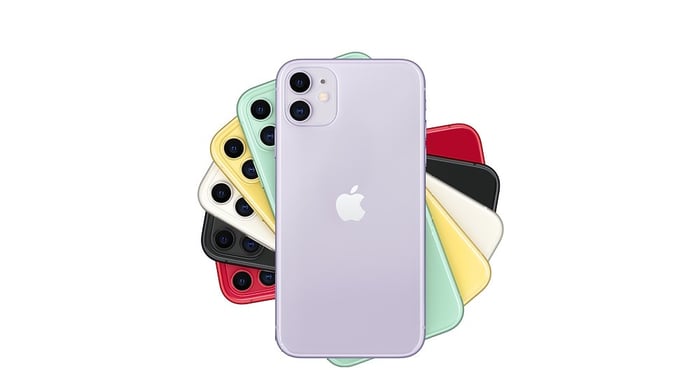 Through the first nine months of fiscal 2019, Apple's iPhone revenue has tumbled 15% year over year. That revenue shortfall has been partially offset by growth in wearables, iPad, and services, but revenue is still down overall.

While the iPhone 11 may outperform its predecessor, Apple appears to be betting that 2020's batch of iPhones will drive a recovery. The phones are expected to include 5G wireless technology, and the company plans on shipping at least 80 million of the new devices, according to Nikkei Asian Review's sources. "There will be three of them and the company has set an aggressive sales target," said one of the sources, referring to the number of 5G models.

Also of interest to investors will be how much revenue Apple generates from services. As iPhone revenue has declined, Apple has been increasingly focusing on selling subscriptions to its customers. The company's Apple TV+ streaming service is set to launch on Nov. 1 for $4.99 per month, joining other services like Apple Music and Apple Arcade.

Analysts are expecting Apple to report fourth-quarter earnings per share of $2.84, down slightly from the prior-year period, on essentially flat revenue of $63 billion. The earnings call is scheduled for 5 p.m. EDT.