Hess (HES 4.23%) is in the midst of a significant transition. The energy company is working with ExxonMobil (XOM 2.89%) and Chinese oil company CNOOC to develop a massive oil find offshore of Guyana. The partners took a significant step toward starting up production from that locale, called the Stabroek Block, during the third quarter, and are now on track to pump the first oil from it in December, ahead of their initial target of early 2020.

As the output from Guyana ramps up over the course of 2020, it will become Hess' main growth engine. However, in the meantime, its position in the North Dakota section of the Bakken shale is doing an admirable job of driving the company forward, as was evident from its third-quarter earnings report.

Hess's Q3 output exceeded its guidance range entirely on the strength of its Bakken fields, where oil production shot upward by 38% year over year and blew past its forecast. The company benefited both from a new well-completion design that's enhancing productivity and  from some new gas-related infrastructure coming online. That enabled the company to capture more of the natural gas produced by its wells.

Those strong results in the Bakken more than compensated for hurricane-related downtime in the Gulf of Mexico that cut about 6,000 BOE/D from its output during the quarter. Overall, production in that region declined from 71,000 BOE/D in the year-ago period to 59,000 BOE/D, with natural field declines and a larger amount of planned maintenance also dragging down output.

The company also experienced some maintenance-related downtime in Malaysia and Thailand. These issues caused its costs to rise from $11.41 per BOE to $12.13 per BOE. Between those higher costs and lower commodity prices, the bottom line for the company was a net loss a bit worse than analysts had expected. 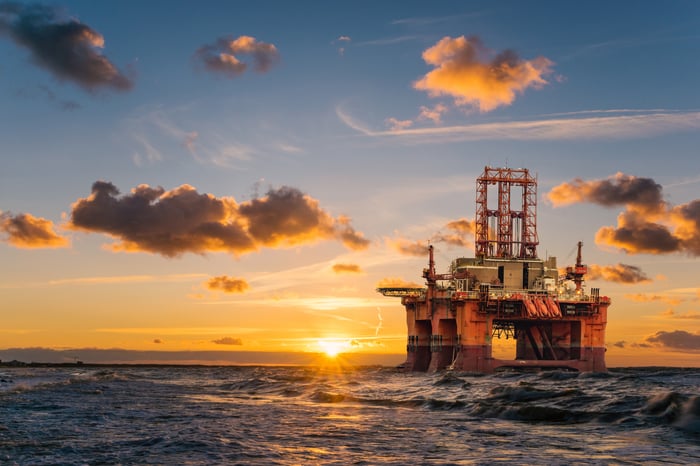 What's ahead for Hess

While the Bakken shale drove the story for Hess in the third quarter, that region will soon take a back seat to Guyana. Management noted in the earnings release that the floating production, storage, and offloading (FPSO) vessel for the first phase of the Exxon-led development arrived in late August. Because of that, it's now on track to begin producing oil -- and contributing to Hess's growth --  in December, a bit earlier than had previously been anticipated.

In addition, Exxon announced in September that it made another discovery in the region. The Tripletail find was the 14th in the Stabroek Block, which holds what are now estimated to be 6 billion barrels of oil equivalent resources. That's a massive resource base that Exxon believes will be able to support at least five FPSOs in the region producing a combined output as high as 750,000 barrels of oil per day by 2025.

Meanwhile, Hess announced a discovery of its own in the Gulf of Mexico during the quarter. The Esox-1 well is about six miles from its Tubular Bells production facility. Because of that proximity, Hess anticipates being able to bring production at the well online by the first quarter of 2020.

Anticipation of next year's new production is somewhat overshadowing the fact that Hess is delivering excellent results in 2019. It boosted production guidance for the year again from a 275,000 BOE/Dto 280,000 BOE/D range to a new estimate of 285,000 BOE/D. Again, that comes back to the Bakken operations, where average production is on track to come in 5,000 BOE/D higher than the earlier forecast range.

Between the soon-to-arrive output from the first phase of the Guyana project, rapid production growth in the Bakken shale, and that recent find in the Gulf of Mexico, Hess is on track to produce a gusher of low-cost oil and cash flow in 2020. That makes this energy company  one of the most exciting growth stocks in the oil patch these days.