For this pair of decliners, the day was all about earnings.

Although no investor should buy or sell exclusively on the basis of a stock's latest quarterly earnings report, these results matter. Looking at and behind the numbers can reveal crucial strengths or weaknesses in a company's business model, and provide clues as to its future prospects.

With that firmly in mind, let's take a look at two top stocks that got rocked on Wednesday due in great part to their earnings releases. What do their respective performances indicate about their worth as investments? 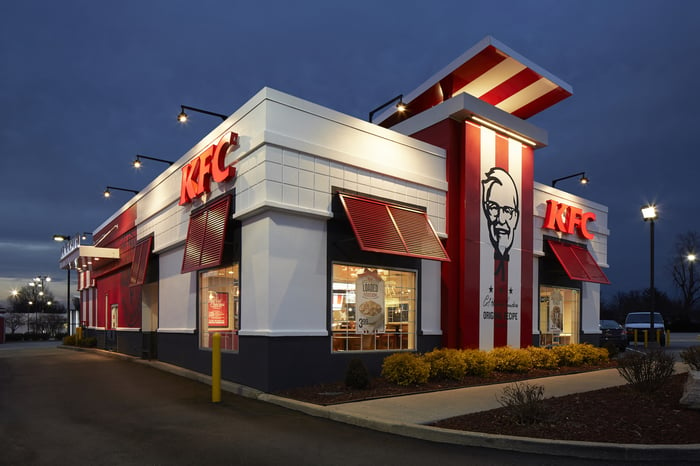 Yum! Brands (YUM -0.86%) stock closed down nearly 6% on the day. The company's bottom line came up well short of expectations thanks largely to one of the chain restaurant operator's recent investments.

For its Q3 of fiscal 2019, the operator of Taco Bell, Pizza Hut, and KFC restaurants posted revenue of $1.34 billion, down but not significantly so from the $1.39 billion it earned in the same quarter of 2018, and basically in line with the average analyst estimate. Same-restaurant sales rose by 3%, a shade below the 3.3% expected by prognosticators.

The gap between this and last Q3's net profit is due in no small part to the company's investment in troubled meal delivery service Grubhub (GRUB). During the quarter, Yum! Brands absorbed a $60 million pre-tax hit from this involvement.

This is compounded by the uncomfortable coincidence of Grubhub reporting Q3 earnings just before Yum! Brands. To put it mildly, Grubhub's performance was not inspiring: Revenue growth is slowing, and the company's headline numbers failed to meet analyst projections. Guidance was also weak.

That was a troubling development for a Grubhub stakeholder like Yum! Brands. No investor likes an underperforming asset dragging down one of his or her companies.

In my opinion, Yum! Brands has done a decent job keeping most of its brands on a modest growth path, no mean feat considering that traditional fast food isn't in fashion (at least among American consumers).

Still, while I don't think investors should get stuck on the Grubhub sob story, I don't find Yum! Brands to be loaded with great potential. I'd leave the stock alone for now.

According to Zacks Investment Research, neither figure met analyst expectations. These were for nearly $733 million on the top line and $2.74 in per-share core FFO.

The slip in FFO is due to a bit of a spike in expenses for Public Storage's same-store facilities, which it defines as those "owned and operated on a stabilized level of occupancy, revenues and cost of operations since January 1, 2017." These expenses rose by more than 6%, due mostly to higher marketing costs; a bump in property taxes also took a bite.

Since Public Storage is quite a visible REIT, with its company name prominently displayed on its numerous facilities in American cities, it has the scope to curb marketing expenses if and when it desires. In the interest of lifting FFO, I think it'll find a way to do so.

Meanwhile, I'm encouraged by the company's constant efforts to expand -- it acquired 10 new properties during the quarter -- and its ability to grow revenue and FFO. It doesn't pay the highest-yielding dividend among REITs, but the distribution is steady and reliable, and Public Storage has raised it many times over the company's history. I think this stock is a buy.