T-Mobile (NASDAQ:TMUS) reported third-quarter earnings results earlier this week, and of course, the looming merger with Sprint (NYSE:S) was on everyone's minds. Merger-related costs continue to add up: $159 million in the third quarter with another $125 million to $150 million expected in the fourth quarter.

Last week, Colorado withdrew from the multistate lawsuit that is seeking to block the deal, as T-Mobile and Sprint continue to make state-specific concessions, typically related to 5G technology and pricing commitments, to various states to win over their support. Here's what T-Mobile had to say about the blockbuster deal. 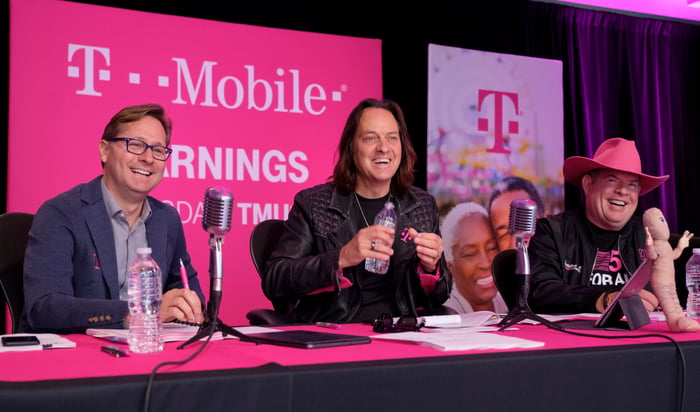 T-Mobile now expects the deal to close in early 2020

On the conference call with analysts, CEO John Legere noted that the carrier has now secured approval from the Federal Communications Commission and Department of Justice, with the aforementioned multistate lawsuit being the final hurdle to clear. That case is scheduled to go to trial in December, which will push back the expected closing timeline. T-Mobile had previously hoped to close the deal before year's end.

We have a lot of the leaders that recognize the benefits of this transaction will deliver for consumers in their state and beyond. Now, as you know, the state AG trial is set to begin on Dec. 9. In the meantime, we continue to be open to and are having many discussions with the state AGs. We now expect the merger will be permitted to close in early 2020.

Even though much has changed since the merger was proposed in April 2018 -- most notably the faster-than-expected deterioration of Sprint's business -- T-Mobile is sticking with its estimate that it can realize a whopping $43 billion in synergies. However, that's a mushy estimate derived from the net present value of cost synergies over many years; run-rate cost synergies are expected to be around $6 billion.

Legere declined to comment on potential liability associated with allegations that Sprint improperly collected subsidies from Lifeline, a federal program that subsidizes wireless service for low-income Americans, since Sprint is technically still a separate company and the investigation is ongoing.

When asked about the persisting pushback from the remaining state attorneys general, Legere expressed confidence that the companies can either continue addressing each state's concerns or win at trial. "So we feel very good about the conversations [with states] and where they're headed," Legere added. "And we feel very good and confident either in the process of a settlement or even going to trial and having the case seen well."

The current merger agreement that's on the table actually expires tomorrow, a deadline that has already been previously extended. That doesn't mean the merger will be automatically terminated, but it could provide an opportunity for T-Mobile to renegotiate terms of the deal. Legere also declined to comment on whether T-Mobile and Sprint would look to extend the merger agreement, instead deflecting and saying T-Mobile and Sprint are "currently focused on working very diligently to complete the last remaining steps to be able to close the merger in early 2020."

Despite the merger uncertainties, Legere teased that the company already has another Un-carrier move up its sleeve for the New T-Mobile, referring to the combined company. The eccentric CEO urged investors to mark Nov. 7 for the announcement.