Major benchmarks fell Thursday amid worries about the prospects of a trade deal with China, despite some positive earnings reports. The Dow Jones Industrial Average (DJINDICES:^DJI) and the S&P 500 (SNPINDEX:^GSPC) finished modestly lower. Trade-sensitive sectors like industrials and materials were the weakest, while utilities and communications services managed gains. 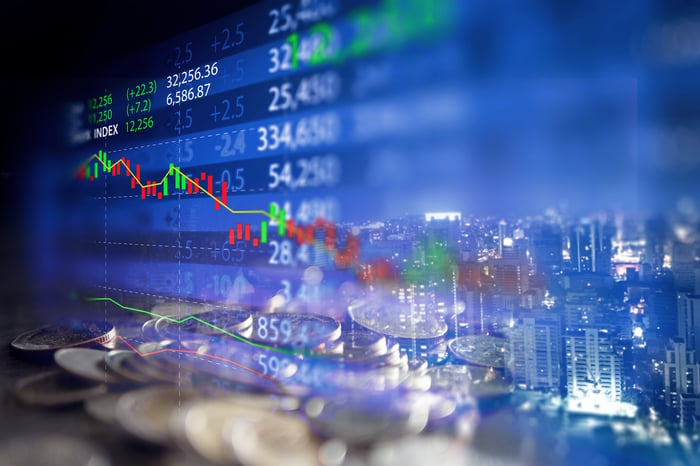 Declining iPhone sales didn't stop Apple from reporting better-than-expected growth in its fiscal fourth quarter, and investors bid the shares up 2.3%. Net sales grew 1.8% to $64.04 billion, beating expectations by about $1 billion. Earnings per share increased 4.1% to $3.03, while Wall Street was expecting a decline of 2.4%.

The standout results came from Apple's services business, which grew sales 18% to $12.5 billion, as the company reported a 36% year-over-year increase in paid subscribers to its digital content. The wearables, home, and accessories segment's revenue soared 54% to $6.5 billion, thanks to strong demand for Apple Watch, AirPods, and Beats products. iPhone sales fell 9.2% to $33.4 billion.

Companywide gross margin expanded 40 basis points from last quarter, but net income actually declined 3.1%. Apple is aggressively buying back stock, so a 6.8% drop in the number of shares outstanding from the period a year ago resulted in the increase in EPS.

Looking forward, Apple guided to fiscal first-quarter revenue of $85.5 billion to $89.5 billion, exceeding the analyst consensus and representing 3.8% growth at the midpoint, compared with a sales decline of 5% in fiscal Q1 2019.

Facebook reported strong revenue, profit, and user growth in the third quarter, despite highly visible political pressure and regulatory scrutiny, and shares rose 1.8%. Revenue jumped 29% to $17.65 billion and earnings per share increased 20% to $2.12. The average analyst was expecting earnings of $1.91 per share on revenue of $17.37 billion.

Facebook had said that growth in revenue would decelerate from Q2 in constant currency terms, and that's what happened, although to a lesser extent than expected. Excluding currency, revenue grew 31%, compared with 32% last quarter. The company added 30 million daily active users for a total of 1.62 billion, up 9% year over year. Monthly active users grew 8% from last year to 2.45 billion, an addition of 40 million sequentially. Users grew sequentially in all regions of the world.

Looking ahead, Facebook said on the conference call that it expects the Q4 reported revenue growth rate to decelerate by mid-to-high single digits, but the deceleration will be less pronounced in 2020.