World Wrestling Entertainment (NYSE:WWE) stock is down 16.2% as of 12:35 p.m. EDT despite "beating earnings" earlier this morning.

Because beating earnings is only part of the story. 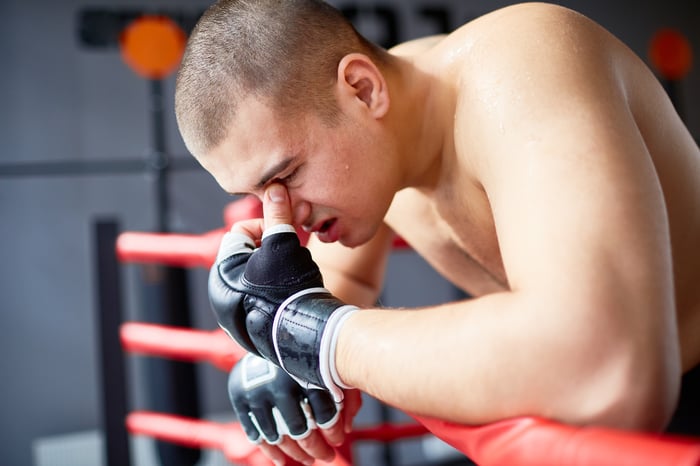 On the one hand, yes, World Wrestling Entertainment beat earnings. The $0.06 per share that it reported was fully 3 times better than the $0.02 per share that Wall Street had predicted.

Regardless, $0.06 per share represented an 84% tumble from the $0.37 per share WWE had earned in the year-ago quarter, a fact management blamed on the absence this quarter of "excess tax benefits related to the Company's share-based compensation awards at vesting," as well as "lower operating performance and the impact of the finance lease related to the Company's new headquarters."

It's also worth pointing out that WWE's sales declined 1% and, at $186.3 million, fell more than $5 million short of consensus targets. Oh, and free cash flow vanished as well. Instead of the $35.5 million generated in Q3 last year, this year, WWE burned through $16.4 million in cash.

Topping off all that bad news, World Wrestling Entertainment also lowered its guidance for this year. Instead of the $200 million in adjusted operating income before depreciation and amortization (OIBDA) -- a very non-GAAP number -- WWE says its adjusted OIBDA will now be no more than $190 million and perhaps as low as $180 million.

Finally, just in case you're confused about what "adjusted OIBDA" means in terms of GAAP financial metrics, WWE has this helpful advice: "WWE is unable to provide a reconciliation of fourth quarter or full year guidance to GAAP measures" because "at this time, WWE cannot accurately determine all of the adjustments that would be required."

Investors might want to keep their guard up until they know more.