Please ensure Javascript is enabled for purposes of website accessibility
Log In Help Join The Motley Fool
Free Article Join Over 1 Million Premium Members And Get More In-Depth Stock Guidance and Research
By Daniel Foelber - Nov 1, 2019 at 6:10AM

Which is the better beaten-down E&P?

Marathon Oil (MRO 7.44%) and EOG Resources (EOG 3.13%) are each down about 20% so far this year. Does that mean the stocks are equal? Certainly not. And holding either stock has been difficult for long-term shareholders who now face Marathon and EOG near three-year lows.

Despite the stock-price drops, both companies have attractive upstream asset portfolios. With earnings reports coming up for both companies next week, now's a great time to take a look at how these companies compare.

2019 has been a pivotal year for Marathon Oil. The company's credit rating was upgraded to investment grade by Moody's on April 24, and from BBB- to BBB by S&P on June 19. The rationale for the former upgrade is "supported by Moody's expectation of good cash flow based leverage metrics as the company invests in its four core US shale assets to grow production and reserves, while its international assets decline." Moody's rationale assumes "range-bound commodity prices" but notes that "Marathon Oil's capital efficiency could lag some of its other oil-weighted peers" as " the company develops its less mature STACK and Delaware Basin assets." Investment-grade credit ratings signal to bondholders and shareholders that the company has a low risk of defaulting. Due to the high amounts of debt financing associated with exploration and production (E&P) companies, investment-grade ratings are extra important to the business. 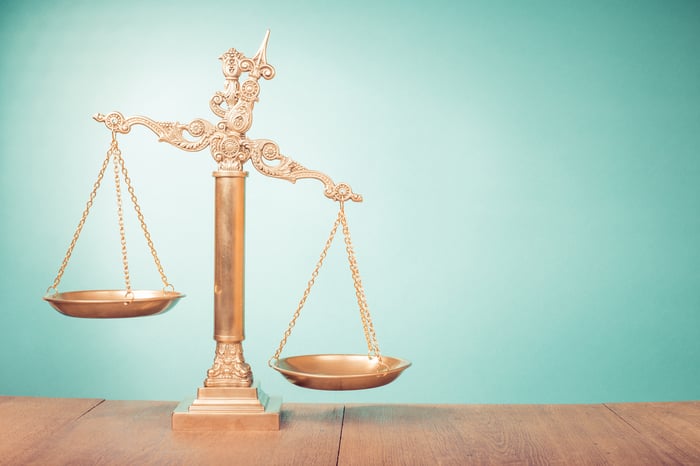 Although the stock's dividend currently yields less than 2%, shareholders are benefiting from massive share repurchases, including $950 million since 2018, that have been funded by organic free cash flow. The $950 million has amounted to a roughly 6% reduction in share count.

In terms of efficiency, Marathon is doing what other great E&Ps are doing, lowering its unit production costs, which are down 14% from Q2 2018, reaching, the company says, the "lowest quarterly average unit production costs since becoming an independent exploration and production company in 2011." Marathon says it now has "peer leading leverage metrics and free cash flow breakeven oil price."

If anything is holding Marathon back, it's the company's pure-play allocation into U.S. shale plays, specifically on the oil side. In Q2, international production made up just 103,000 barrels of oil equivalent per day, which is less than 25% of the company's 435,000 total in the quarter.

Marathon has four main production fields in the United States, two of which, the Bakken and Eagle Ford, made up roughly 70% of the company's Q2 2019 oil production.

Marathon's only majority gas play is still in the early development stage but is expected to yield 82 mboed, of which 25% will be oil.

This is all to say that Marathon, for better or for worse, has intense exposure to U.S. shale oil and is reliant on specifically two shale plays.

Like Marathon, EOG is pretty much a pure-play U.S. onshore oil and gas company. But unlike Marathon, EOG has a medley of estimated proved reserves consisting of 52% petroleum, 27% natural gas, and 21% natural gas liquids, with crude oil and condensate making up 54% of revenue for the first half of the year. A hybrid petroleum- and natural-gas-based portfolio gives EOG the opportunity to generate returns from more than just one commodity. For example, EOG's recent long-term gas supply agreement (GSA) with liquefied natural gas titan Cheniere Energy bodes well for EOG to benefit from the expected rise in LNG exports to energy-dependent economies like China, Korea, and Japan.

Ever since the oil downturn of 2014, EOG has been fighting tooth and nail to lower the oil price required for a 10% return on capital employed (ROCE), a metric used to determine the profitability of a company after factoring in the amount of capital used. In 2014, EOG achieved a 10% ROCE at $83 a barrel, but today that number is down to around $55. By 2022, EOG plans to be able to return a 10% ROCE at below-$50 oil. Although the company is cutting it a little close compared to today's oil prices, management's successful lowering of break-even prices over the past five years is a great success story.

Marathon Oil and EOG both deserve credit for driving efficiencies to further insulate themselves from another oil downturn. That being said, both companies achieve positive free cash flow at an average oil price of around $50 a barrel, meaning they are highly susceptible to short-term or sustained downswings in crude oil prices.

Additionally, they are dependent on continued unconventional hydrocarbon techniques and technologies like fracking and horizontal drilling, which face political risks. The position of all Democratic candidates now is to ban, limit, or regulate fracking.  Simply put, neither company has enough meaningful international exposure to offset any headwinds in the U.S. oil and gas industry.

If you're going to pick one, go with EOG. The company is doing a great job of executing its three-pronged attack of petroleum, natural gas, and natural gas liquids. E&P companies like Marathon Oil and EOG Resources will always be vulnerable to commodity prices and politics, but both companies are much better positioned now than they were three years ago despite their stock prices being lower.