Please ensure Javascript is enabled for purposes of website accessibility
Free Article Join Over 1 Million Premium Members And Get More In-Depth Stock Guidance and Research
By Jeremy Bowman - Nov 1, 2019 at 9:19AM

The e-commerce giant is doing everything it can to get a piece of this $700 billion market.

Amazon ( AMZN -1.38% ) wants to sell you your groceries, and it's prepared to spend billions to do it.

The e-commerce giant just announced that it was dropping its $14.99/month fee for grocery delivery from Amazon Fresh, giving Prime members in more than 2,000 cities and towns free delivery on groceries including meat, seafood, and produce. Prime members currently using grocery delivery will now get it for free, while others can request an invitation and join a waiting list. Presumably, Amazon needs to ramp up its capacity and wants to be sure it can match supply with demand, so it will expand free delivery gradually in order to do so.

In most cities that Amazon Fresh serves, delivery will come as quickly as one or two hours, and it requires a $35 order minimum.

Since Amazon's $13.7 billion acquisition of Whole Foods two years ago, the company has made no secret about its ambitions in grocery. For a decade before that, Amazon struggled to gain traction with its Fresh grocery delivery service, and even with Whole Foods, the company remains a bit player in the industry as rivals like Walmart ( WMT 1.51% ) have continued to dominate the $700 billion space.

However, Amazon has made improvements at Whole Foods: lowering prices, discounting items, and offering free delivery for Prime members near stores. By making free delivery available from Amazon Fresh for Prime members, Amazon is pulling the biggest lever it has in the grocery wars: the ability to offer fast, free delivery. The company has been building out grocery delivery hubs in order to support nationwide delivery, and reports have come out from multiple media outlets saying the company is working on launching a lower-priced grocery chain to complement Whole Foods and the delivery service, which would be a way to approach the grocery market from all angles.

There's little question that the move will be expensive. Amazon just said in its third-quarter earnings call that it would spend $1.5 billion in additional shipping costs in the fourth quarter to support its one-day Prime shipping program after spending about $800 million in the second quarter and more than that in the third. It's difficult to say how much free grocery delivery will cost Amazon, but the company has made it clear time and again that it is willing to spend to gain customer loyalty and market share.

In the announcement, it said, "Given the rapid growth of grocery delivery, we expect this will be a popular benefit," a sign the company is anticipating significant growth from it. The irony of free grocery delivery is that, at least in the near term, the more popular it is, the more it's probably going to cost the company on the bottom line.

Supermarkets are a notoriously low-margin businesses, as even successful chains tend to have profit margins in the low single-digits. Given that, finding money to pay for delivery is difficult, which explains why Amazon Fresh and its rivals have charged for delivery either directly or through a service like Instacart. 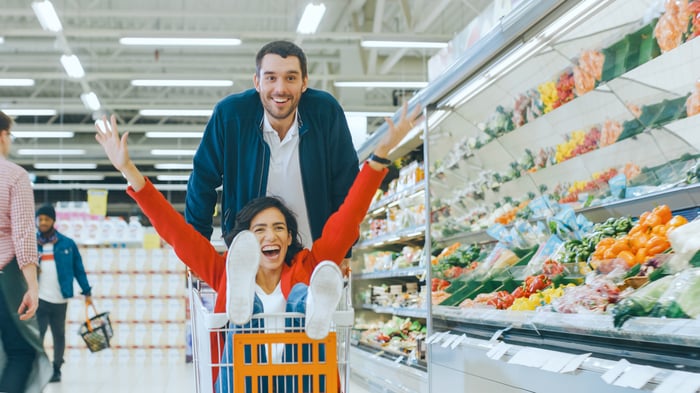 A game of catch-up

Amazon's biggest advantage over its retail rivals is its massive delivery infrastructure that includes a network of warehouses across the country, its own logistics and transportation assets, including contracted last-mile delivery drivers, and its overwhelmingly popular Prime loyalty program that keeps customers locked into its ecosystem for $119/year. In other words, the company can provide things like one-day delivery and now free grocery delivery that its competitors simply can't match as they lack both the infrastructure and the built-in audience from Prime. As brick-and-mortar retailers, they simply aren't set up the way Amazon is and will probably never be able to match it in delivery capabilities.

The question for rivals like Walmart, Kroger, and Target, then, is what will they do next to fend off Amazon? These chains have already been reorienting their businesses to be more convenient for customers, offering free pick-up options and delivery with a fee.

Walmart has rapidly expanded its online grocery pickup program to thousands of stores and is also adding delivery, charging $98 a year for unlimited orders. Kroger, meanwhile, is experimenting with a range of delivery models, and Target offers free grocery delivery through Shipt with a $99 annual fee.

However, the biggest advantage traditional grocers have over Amazon may be in price as they do significantly more volume than Amazon does, and their stores are set up for cost efficiencies rather than fast delivery. A CNBC comparison found that a basket of goods delivered from Walmart was 31% cheaper than the equivalent one delivered by Amazon Prime Now. That's a huge difference, and one Walmart would be smart to remind its customers of.

In other words, even with free delivery, an Amazon takeover of groceries won't be easy. This is a huge industry, and the leading grocers are going to make efforts to protect their market share. They may not follow Amazon into free delivery, but the gambit is unlikely to yield profits anytime soon for the e-commerce giant, especially as it's still building a reputation for itself in grocery and fresh food.