Please ensure Javascript is enabled for purposes of website accessibility
Log In Help Join The Motley Fool
Free Article Join Over 1 Million Premium Members And Get More In-Depth Stock Guidance and Research
By Reuben Gregg Brewer - Nov 1, 2019 at 9:03AM

Investors are pretty skittish today, yet good news can still move a stock. But was Fastenal's third quarter good enough to justify a 20% pop?

With the S&P 500 index hovering near all-time highs and economic growth around the globe showing signs of slowing, market participants are on edge. Bad news from a company can result in harsh punishment, while good news can lead to a wave of investor enthusiasm, which is what Fastenal (FAST -2.25%) saw when it reported third-quarter 2019 earnings that beat expectations. The stock rocketed 14% higher the day of the earnings release. It kept rising, too, and is up nearly 20% at this point. But was the news really that good?

The big headline from the third quarter was that Fastenal beat Wall Street's earnings expectations. That's clearly good, but step back and look at the actual numbers. Analysts had been calling for earnings of $0.35 a share in the quarter and Fastenal came up with $0.37 a share -- a $0.02 beat. Yes, shareholders get excited about things like this, but long-term investors shouldn't see a few pennies here or there as all that important. 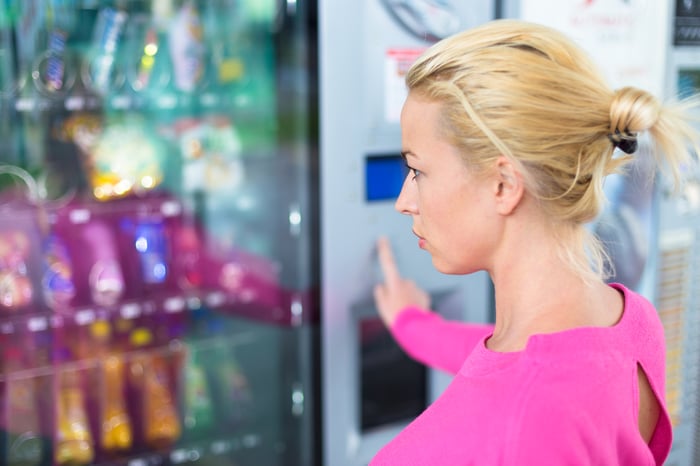 That said, earnings were up roughly 8% year over year in the quarter, which is a positive when you look at the global growth picture. In fact, Fastenal is managing what appears to be a slowing worldwide economy in relative stride. To put that into perspective, the International Monetary Fund (IMF) just lowered its global growth forecast to 3%, stating that the world is in a "synchronized slowdown." If 3% sounds pretty good, remember that this is for the whole world, including fast-growing emerging markets and slower-growing developed markets -- which is largely where Fastenal operates. Developed markets are only expected to come in with 1.7% growth this year, which was also lowered from previous expectations. (More on this topic in a second.)

But it wasn't just earnings that came in on the positive side of things. There was also good news on some of the company's key growth initiatives. For example, it continues to reduce its store count while increasing the number of on-site locations, including vending machines. Branches are expensive to operate and become less valuable as Fastenal gets entrenched in a customer's business by setting up shop within the customer's facilities. Shifting to on-site locations helps to create very "sticky" relationships with customers, who can't easily replace the services that Fastenal provides once they partner up on site. And, thus, closing branches at the same time helps keep costs in check while the company is expanding its reach in other, more productive ways. Solid execution on this front further solidifies Fastenal's long-term story.

But not all of the news was good. Notably, the industrial company's sales are slowing. A key metric Fastenal provides investors is its daily sales rate, which is basically net sales divided by the number of business days. In the third quarter, the daily sales rate was up 6.1% year over year. At first blush that sounds great, but step back and look at the longer-term trend.

Daily sales were on an upward trajectory throughout 2017, peaking at 14.8% in the final stanza of that year. In 2018 that fell a bit, but generally trended sideways at about 13% or so. Daily sales have declined each quarter so far in 2019, going from that 13% figure to the recent 6.1%. That's more than a 50% haircut in daily sales rate growth in just three quarters.

Meanwhile, the weakness is hitting every part of the company's business. Daily sales of non-fasteners, about two-thirds of the top line, were lower each quarter. Daily sales of fasteners, the company's namesake product and roughly 33% of revenue, rose in the first quarter, but have fallen dramatically since. They've now fallen from daily sales of roughly 12% to around 3%. And the trouble spans the heavy equipment, construction, and manufacturing breakouts offered by management as well. Fastenal is doing well based given the conditions it is facing, but it is clearly dealing with a broad slowdown in demand. 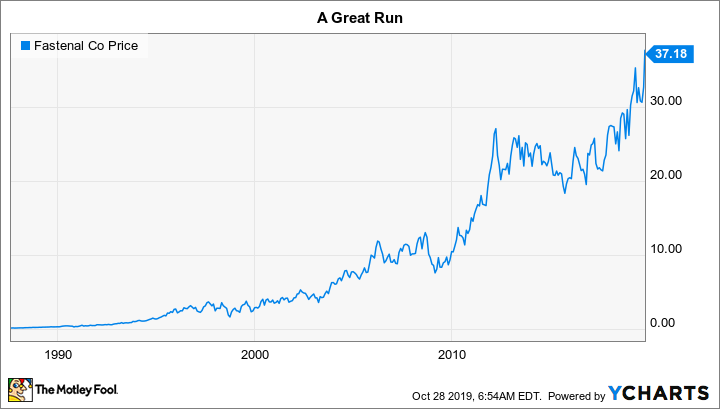 And it isn't the only industrial supplier that's seeing weakening trends, with a lot of other industrial companies showing signs of a slowdown and lowering their growth outlooks. If a slowdown is all that happens, as the IMF is suggesting, then Fastenal should be fine. However, if the slowdown takes a nasty turn and becomes a recession, then Fastenal (and most other industrials) will likely see a steep drop-off in demand. These are cyclical businesses, so that's just par for the course. But with so many companies -- including Fastenal -- showing signs of slowing growth, it's probably better to err on the side of caution than to jump in with both feet.

After the big run-up, Fastenal's stock is trading near all-time highs. Its price-to-sales, price-to-earnings, price-to-book-value, and price-to-cash-flow ratios are all above their five-year averages. It would be hard to argue that Fastenal isn't executing well today, like it always has (which is why it is a favorite of growth investors). But at a time when the company's underlying sales are weakening and the global outlook for growth is tenuous, the good report that sent Fastenal's shares up 20% isn't really good enough to justify buying today. Too much good news is priced into the stock at a time when bad news looks far more likely.