Please ensure Javascript is enabled for purposes of website accessibility
Log In Help Join The Motley Fool
Free Article Join Over 1 Million Premium Members And Get More In-Depth Stock Guidance and Research
By Demitri Kalogeropoulos - Nov 2, 2019 at 11:00AM

Highlights from the snack and cereal giant's latest earnings report.

Investors have been getting more optimistic about the rebound strategy at Kellogg (K 0.12%). The snack and breakfast giant showed hints of accelerating growth in each of the last two earnings reports. That slow but steady improvement also came with an encouraging boost in profitability.

On Tuesday, Kellogg extended that positive momentum on both the top and bottom lines, suggesting its business might finally have hit an inflection point. With that bigger picture in mind, let's look at some highlights from management's presentation to shareholders.

1. The growth plan is working 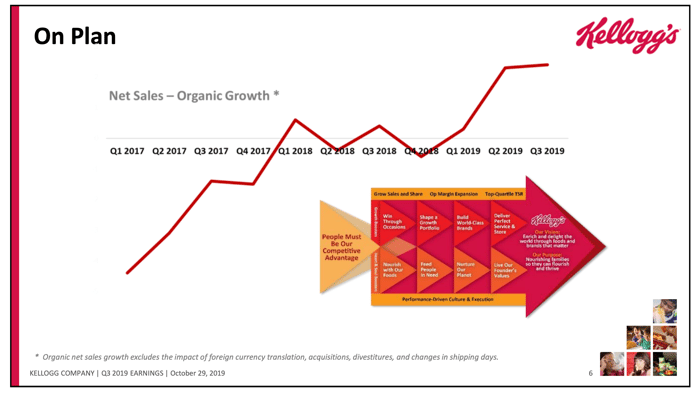 Kellogg reported a 3% decline in sales for the quarter. But after adjusting for currency exchange moves and brand sales, growth was just over 2%. Though modest, that result marked the company's third straight acceleration as organic gains rebounded from the 1% decline they notched in the fourth quarter of 2018. "We remain squarely on strategy and on plan," CEO Steve Cahillane said in a press release. Executives noted that growth was broad-based, too, as it was supported by each of Kellogg's four sales regions.

2. It's getting more profitable 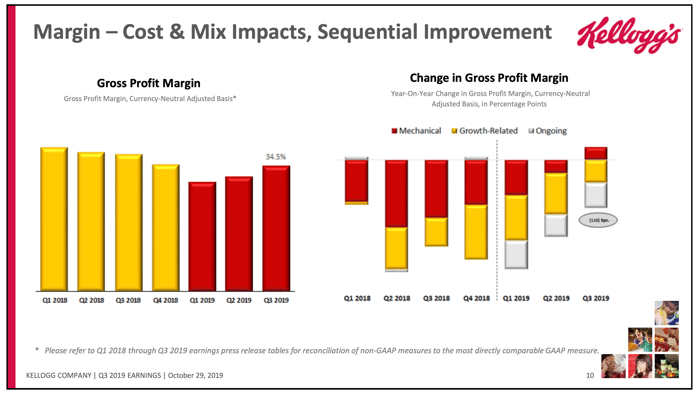 Gross profit margin landed at 34.5% of sales, which is a full percentage point below Kellogg's results from a year ago. Yet zooming in a bit tells a more positive story for the consumer staples giant. Thanks to help from higher prices and aggressive cost cuts, profitability has now improved in each of the last two quarters, reversing the trend through the same period last year.

This success is giving management more confidence in a brightening earnings picture, especially as its period of elevated spending winds down over the next few quarters. "As we move past our heaviest investments and costs, we are on track for delivering gradual improvement in profitability," Cahillane said. 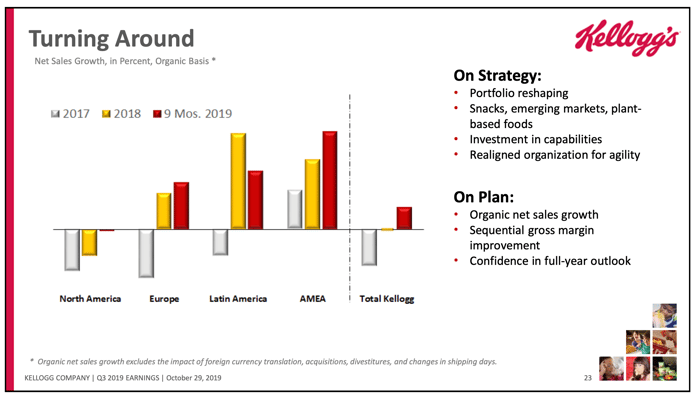 Kellogg affirmed all of its key 2019 forecasts and still expects organic growth to be between 1% and 2% this year, yielding losses in adjusted operating profit of 4% to 5%. Cash flow is still on track to land at roughly $500 million. That sales improvement is modest, but executives said the bigger picture shows a clear turnaround happening, with sales gains accelerating across Kellogg's geographic markets. 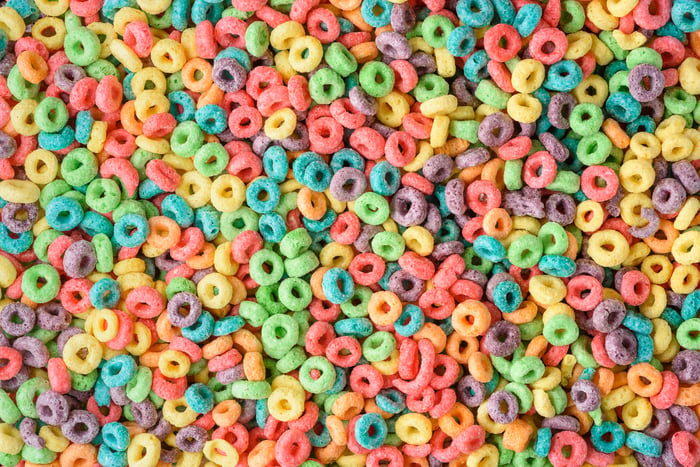 Those predictions don't describe a particularly strong business. They translate into modest market-share losses in key food categories, in fact, along with falling profitability this year. But Kellogg executives can now claim improving top- and bottom-line trends for three consecutive quarters that describe stability after over two years of growth struggles.

The next step is for the company to lean on its focused portfolio to target broader market-share gains beginning in 2020. Its sluggish sales volumes imply that this will be a challenge. Yet if Kellogg can manage even a small step up in growth while extending its cost-cutting successes, it has a good shot at achieving operating profit growth by next year.