For the third time in a row, Lyft (NASDAQ:LYFT) crushed estimates in its earnings report. Specifically, Wednesday's quarterly update made the company a perfect 3-for-3 in topping Wall Street's expectations and its own guidance since it went public. Yet the stock is down about 40% from its $72 IPO price. And even though Lyft's third-quarter results were the kind that would usually send a stock up double digits, the stock fell 6% on Thursday.

Revenue jumped 63% to $955.6 million, easily beating the analyst consensus at $915 million. The ridesharing company made considerable progress on the bottom line as well, slashing its adjusted EBITDA loss by more than half to $128.1 million. Adjusted EBITDA margin narrowed from -45% to -13.4%, helped by a big cut in sales and marketing expenses, which is likely an effect of the company cutting back on coupons and discounts. Both numbers indicate that Lyft is taking significant steps toward profitability, which it promised to achieve by the end of 2021. Its adjusted loss per share of $0.41 was also well ahead of Wall Street expectations, which stood at $1.66. 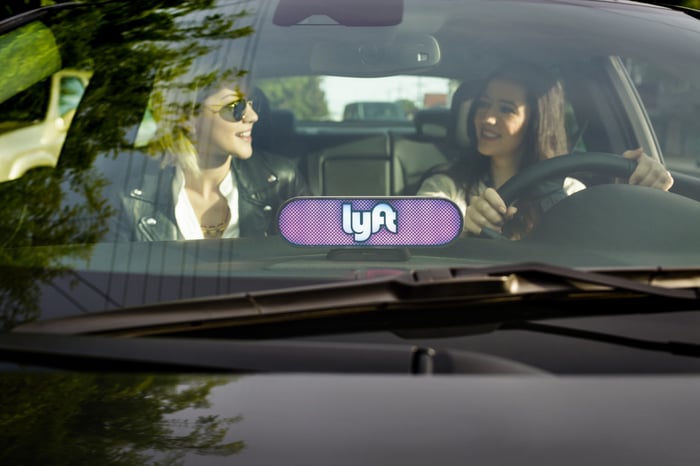 Lyft is clearly executing, both in terms of sales growth and its progress towards profitability. Yet investors don't seem interested in the still-unprofitable ride-hailing specialist.

The knocks on the company are familiar. Analysts have ripped its valuation, cast doubts on the economics of ridesharing in general, and been skeptical of a company that plays second fiddle to Uber Technologies (NYSE:UBER). In the wake of the WeWork debacle, the market has sold off money-losing companies, and Lyft has a history of wide losses -- but that seems to be changing.

CEO Logan Green's promise that the company would be profitable on an adjusted EBITDA basis in two years seems much more credible now after the company was able to slash its quarterly adjusted EBITDA loss by more than half. While profitability on that metric remains heavily dependent on stock-based compensation, getting out of the red would nonetheless be a significant accomplishment.

Meanwhile, Lyft's valuation is starting to look a lot more reasonable given the stock's pullback and the company's surging growth. At a market cap of $13 billion, the stock is valued at a price-to-sales ratio of less than 4 based on its expected revenue for the year. That's below rival Uber, but Lyft is growing significantly faster than its main competitor, showing that investors continue to prefer the larger rideshare operator. Lyft is consistently taking market share from Uber, and the company is growing by both adding riders and getting current riders to spend more on its platform, showing customer loyalty.

Skepticism about the ridesharing industry isn't going to suddenly evaporate, especially given that both Lyft and Uber have fallen sharply since their IPOs, losses continue, and the companies face regulatory threats in California, New York, and elsewhere. But after another stellar report, Lyft seems that much closer to turning around this busted IPO story, even if the market isn't yet willing to give it credit. If the company can repeat the feat by blowing past expectations for another quarter or two, especially if it gives strong guidance for 2020, the stock should finally get moving in the right direction.