One of the biggest questions that growth stocks face is whether their growth rate is sustainable or not. That's exactly the question being asked by investors in consumer robot company iRobot (NASDAQ:IRBT) after its third-quarter results. Let's look at what happened with one of the biggest robotics stocks on the market and what the company needs to do to get back on track.

The company has three product lines: robotic vacuum cleaners (Roomba), robotic mops (Braava), and robotic lawn mowers (Terra). The Roomba is by far its most important product -- vacuum cleaners were responsible for $715 million of the $787 million revenue in the first nine months of 2019. The remaining $72 million came from mopping products, while its Terra lawn mowers are being readied for a large-scale launch in the spring of 2021. 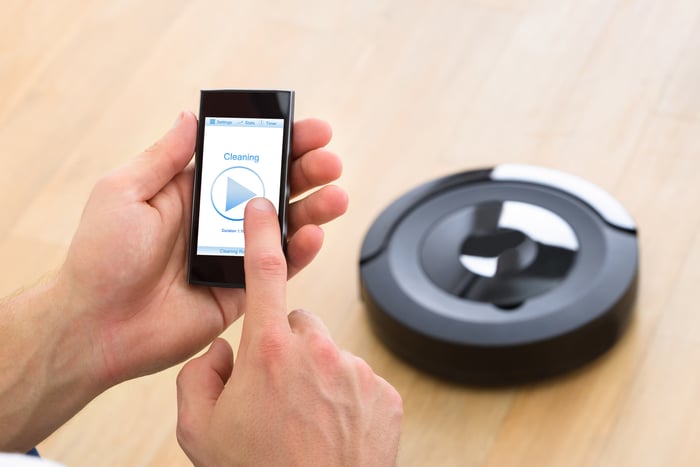 The chart below shows the dominance of iRobot's market position in robot vacuum cleaners. 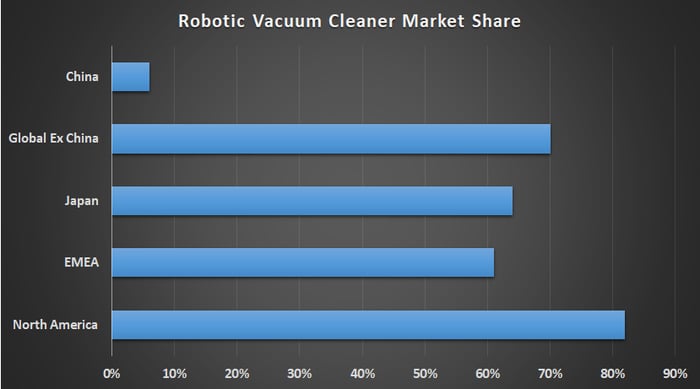 Clearly, the key to its immediate future is the Roomba, and it's where iRobot faced problems in its third quarter. Here's an outline of how the company has lowered revenue and earnings expectations through the year.

Digging into the details of the third quarter, overall revenue grew 9%, with 25% international growth helping offset a 7% decline in its core U.S. market -- even with the benefit of a large shipment to Amazon that was previously expected to take place in the fourth quarter.

There was one important change in management's perception during the period: It appears that iRobot's vacuum cleaners don't have the pricing power that management previously thought they might have.

Discussing the disappointing U.S. sales in the quarter, CEO Colin Angle highlighted the impact of tariffs on Chinese imports, with tariffs on robot vacuum cleaners rising from 10% last year to 25% in May 2019. Consequently, U.S. growth has moderated well below the 30% compound annual growth rate of the past several years, according to Angle.

As you can see in the chart above, iRobot's dominant position in robot vacuum cleaners means it's susceptible to market share erosion. As such, when the company raised its prices to offset the tariff increase, its competitors kept prices static, and customers decided to buy rival products.

In response, Angle said, he decided to reset prices to pre-tariff levels earlier this month on most of its products to defend its market position.

If the pricing power of its robot vacuum cleaners in its core market isn't as strong as management's previous perception, that's a key point in a company with such a dominant market position, particularly at a time when sales growth is slowing.

That slowing may prove temporary, especially if an easing in trade tensions reduces tariffs, and the robotic vacuum market can grab market share from non-robotic cleaners. But it's clear that iRobot's pricing power isn't strong enough to stop erosion of its market share or margin pressure.

The key conclusion is that iRobot is facing more competitive pressure with Roomba than previously thought, and the investment case for the stock is more reliant on developing sales of Braava and Terra. The latter isn't something that can be taken for granted, not least because iRobot is entering a crowded market with companies like Husqvarna, Deere, Honda, and MTD Products (a company Stanley Black & Decker is investing in) already active there.

All told, the risk is going up and the reward is going down for iRobot, and that's why the stock has sold off.